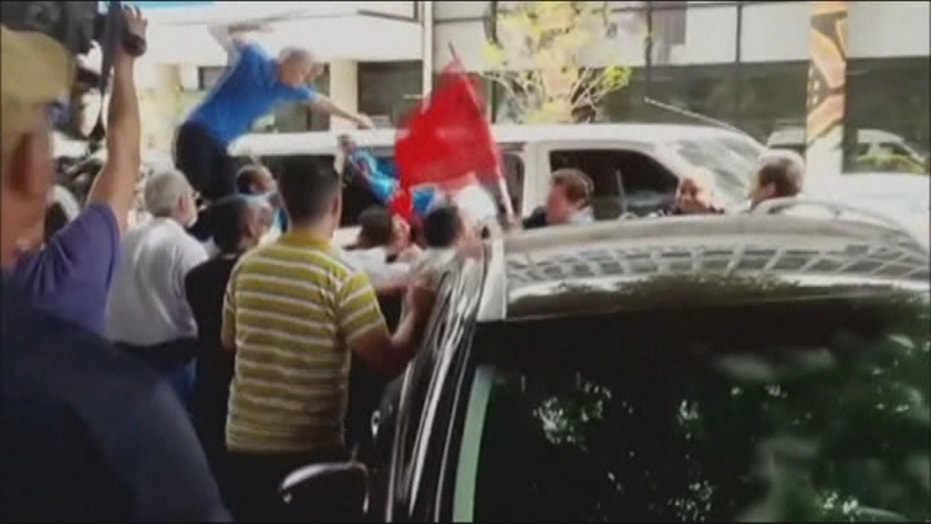 Supporters of the Cuban government and dissidents clashed at the start of the Summit of the Americas in Panama City.

PANAMA CITY (AP) – About 100 supporters of Cuba's government aggressively heckled dissidents from the communist-run island attending a civil society forum Wednesday at the start of the Summit of the Americas in Panama.

Opponents of President Raul Castro were greeted to shouts of "imperialist" and "mercenaries" as they filed into a hotel auditorium to attend speeches by summit host Panamanian President Juan Carlos Varela and former U.S. President Bill Clinton.

Organizers appealed for calm during the frenzied scene, which lasted for more than an hour. But their plea fell on deaf ears and the pro-government groups angrily marched out of the forum, saying they wouldn't attend the proceedings in the presence of individuals they accuse of trying to destabilize Cuba's government. The boycott was later joined by pro-government groups from ally Venezuela.

"We'll never share the same physical space with groups that are paid for by the U.S. and have caused so much damage to the Cuban people," said Ariana Guerra Hernandez, a representative of a group of Cuban university students.

The heated exchange at a normally sleepy forum for non-governmental organizations across Latin America and the Caribbean highlighted the strong emotions hanging over the regional summit generated by the expected attendance by Cuba's president for the first time and recent U.S. sanctions against Venezuelan officials for human rights abuses.

Groups both in favor and opposed to the governments of Venezuela and Cuba are seeking to leverage the presence of U.S. President Barack Obama and 30 regional heads of state to make their views known.

Just organizing the forum was a logistical challenge, with host Panama in collaboration with the Washington-based Organization of American States facing the impossible task of trying to distinguish between grassroots groups and those backed by the two governments.

"We hope for the mutual respect and understanding of everyone who arrives to our country," an exasperated Ruben Castillo, an organizer of the forum from Panama, told journalists who rushed to take photos of the group waving Cuban flags and handing out an 8-page pamphlet titled "Mercenaries in Panama," profiling prominent dissidents in attendance. Among them are Berta Soler, leader of the Cuban group Ladies in White, and Guillermo Farinas.

Also expected to attend are the wives of jailed Venezuelan opposition leaders Leopoldo Lopez and Antonio Ledezma, the deposed mayor of Caracas.

Members of a pro-government Venezuelan group complained that the forum was being promoted by the U.S. to portray Latin America's leftist governments as anti-democratic.

"It makes me indignant that organizers are inviting a group of people who are responsible for instigating violence," said Yendry Velasquez de Bracho, who lost her husband, a National Guard captain, during the anti-government protests last year.