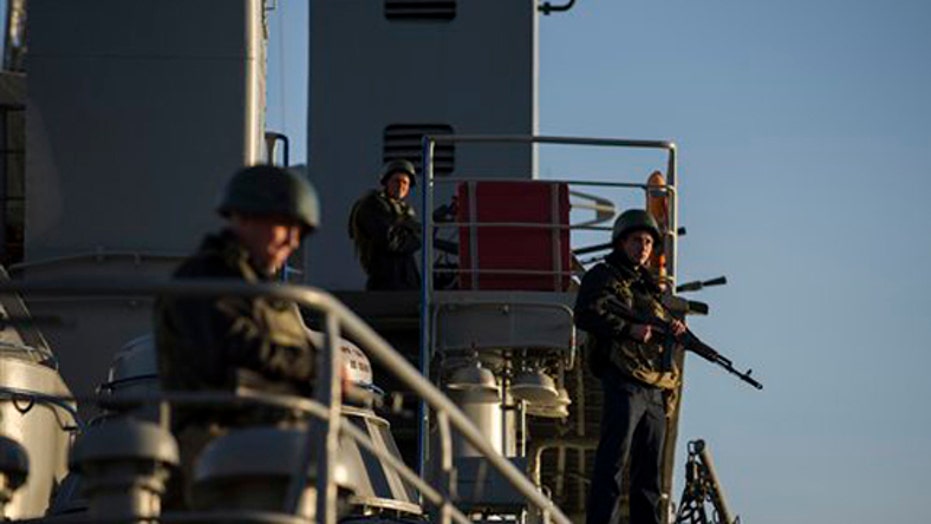 Defcon 3: Everything you need to know about the Ukraine crisis in under two minutes

Crimea, the Black Sea peninsula currently holding the world's attention, has been fought over by Cimmerians, Bulgars, Greeks, Goths, Huns,Turks and Mongols.

It's only relatively recently that Russia and Ukraine have been kicking it around like a soccer ball.

Russia gave Crimea to Ukraine in 1954, when both nations were part of the Soviet Union. Ukraine naturally took Crimea with it in 1991, when it declared its independence following the breakup of the former Soviet Union. Yet, the 10,000-square-mile peninsula, with access to the all-important Black Sea, has existed as a semi-autonomous republic, with a 60 percent majority of ethnic Russians.

Russia has kept its Naval Black Sea fleet there and the population has long felt more allegiance to Moscow than to Kiev. So when last month's Ukrainian Revolution, which resulted in the ouster of ethnic Russian President Viktor Yanukovych, also established Ukrainian the sole language of the land, the longstanding tensions between Crimea's two dominant ethnic groups were rubbed raw.

Russia has sought to portray the uprising against Yanukovych as a coup led by Western-backed extremists and thugs. Kiev's new leaders rolled the dice on the West, seeking closer integration with Europe.

With Ukraine torn between a desire to be part of the west, and its past as part of the Russian empire, and with the Kiev-based revolution forcing the issue, Crimea was the logical flashpoint. As the revolution unfolded, ethnic Russians attacked minority Ukrainians in Crimea's capital, Simferopol, even as Ukrainians persecuted ethnic Russians in the northern cities, including Kiev.

On Feb. 28, Russian military forces occupied key posts, buildings, airports, and other assets in Crimea. The interim government of Ukraine called it an invasion, but Crimean Prime Minister Sergey Aksyonov, elected last week in a poll rejected by the newly-formed government in Ukraine, welcomed the the Russian forces for "guaranteeing peace and calmness" on the peninsula.

For now, it remains to be seen if Russian President Vladimir Putin's move on Crimea is simply intended to send a message to the new Ukrainian government in Kiev, and roll back its claims on the peninsula, or if it is a first step in a bid to bring the whole nation back under some measure of Russian influence, or even control. If the latter turns out to be the case, Russian Prime Minister Dmitry Medvedev's prediction of bloodshed could prove true.

If the crisis ends up pulling western powers in, there will be irony as rich as Crimea's fertile farmland. The Cold War arguably began in Crimea, when, as World War II came to an end in 1945, Allied leaders including President Franklin D. Roosevelt, British Prime Minister Winston Churchill and Soviet leader Joseph Stalin -- met at the Crimean resort of Yalta to divide up Europe.