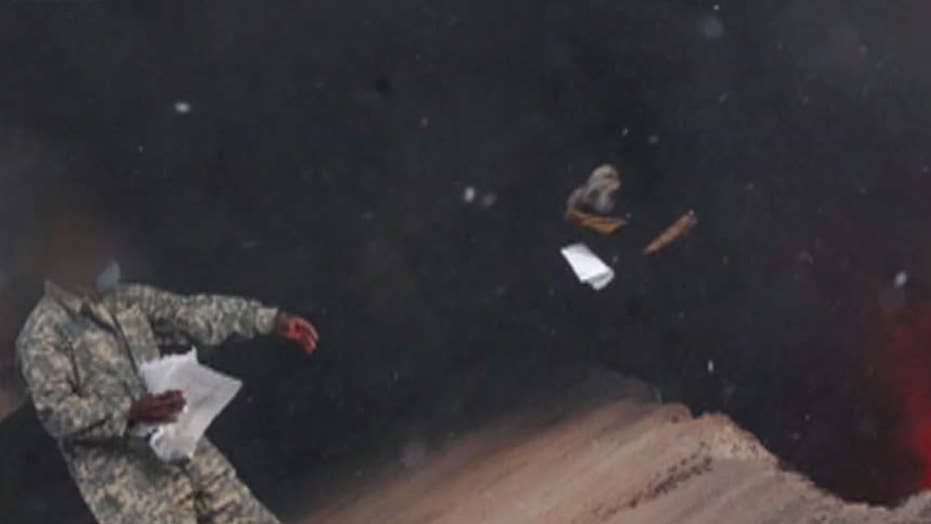 People who lived near the burn pits attribute medical issues to breathing in toxic smoke; Will Carr speaks with a former private contractor about her conditions.

EXCLUSIVE – The thousands of U.S. military personnel and private contractors whose health was compromised by the dense black smoke of burn pits - and who were then denied proper treatment - may finally be vindicated by a recent court ruling.

A judge under the U.S. Department of Labor’s Office for Workers’ Compensation Programs decreed last month that open-air burn pits -- where thousands of chemicals were released into the air after trash and other waste were incinerated at American military bases in Iraq and Afghanistan -- are connected to lung disease, Fox News has learned.

The decision marks a victory for the nearly 64,000 active service members and retirees who have put their names on a Burn Pit Registry created by the Veterans Administration, bringing them one step closer to getting adequate medical coverage, something that has never been guaranteed. Private contractors who were also exposed to the burn pit toxins also have been denied coverage.

“This case has legitimized the disease,”  former contractor Veronica Landry of Colorado Springs, whose case was a part of the recent ruling, told Fox News. “There are many people out there who are still not getting the treatment they need.

“This ruling changes that.”

Veronica Landry, who worked for a private contractor on Mosul Air Force Base in Iraq, retuned home with PTSD and lung-related health issues. (Courtesy of Veronica Landry)

Soldiers have fallen gravely ill or even died from exposure to burn pits in Afghanistan and Iraq, but they are not the only ones who have gotten sick. Civilian workers and private contractors like Landry are also suffering an array of maladies including cancer, respiratory problems and blood disorders and, like military victims, they say they are being ignored.

But private employees don't even have the Veterans Administration to lean on. Landry filed her case with the Labor Department for this very reason.

“I’m really grateful that the Judge looked over our case,” Landry said. “That’s why this is so important. We wanted to make sure that others can get help.”

Landry said in her testimony that she was exposed to smoke from the burn pits “every day” while working at Mosul Air Force Base in Iraq for Kellogg, Brown, and Root [KBG], and that “every plastic water bottle that every soldier drank out of was also burned in the burn pits.”

“I knew what danger I was going to face when I went to Iraq, but I never imagined that I would bring it back home.”

Landry was sent home early after developing PTSD and making matters worse, she started to develop problems with her lungs and other ailments  such as migraines, chills and dangerously low blood pressure. She has been in out of hospitals for nearly ten years.

When symptoms flare up, Landry experiences severe pain and wheezing every time she takes a breath due to inflammation of her lungs. Tasks as simple as speaking can cause her to become light-headed when her condition acts up. She also suffers from fibrosis, which causes her to experience shallow breathing and swelling of her legs and feet from pitting edema.

Landry has been in out of hospitals for the past decade. Her employer's insurance company has refused to provide coverage. (Courtesy of Veronica Landry)

KBG’s insurance company, AIG, has refused to assist with her medical bills, but the recent judicial ruling made clear that AIG should be covering her expenses.

The court’s conclusion was that AIG and KBR should be covering Landry’s expenses.

“Employer [KBR] and Carrier [AIG] are liable for all past, present, and future reasonable and necessary medical treatment related to claimant’s work-related post-traumatic stress disorder and deployment-related lung disease,” reads the order.

Landry says she fears the long-term health issues that could arise from her exposure to open air burn pits. (Courtesy of Veronica Landry)

Officials for Kellogg, Brown, and Root declined to comment on the ruling, instead referring to a previous comment made to back in 2016 when Fox News first reported on Ms. Landry.

“At the limited number of bases where KBR operated burn pits in Iraq and Afghanistan, KBR personnel did so safely and effectively at the direction and under the control of the U.S. military,” read the written statement. “KBR complies with all applicable laws and contractual obligations, which includes providing the federally mandated and specified insurance coverage required for employees working overseas supporting the U.S. government.”

KBR insurance provider, AIG, did not respond to requests for comment.

Those in the military community feel that the ruling will help to shine an overdue light on the complications that have arisen for those exposed to burn pit fumes while serving their country.

“I believe this is a case of common sense and victory for military contractors and we can only hope that the same common sense is applied to our military war heroes and their widows,” Rosie Torres, founder of Burn Pits 360, an advocacy group for service members who have fallen ill, told FoxNews.com.

Thousands of U.S. military personnel who served on bases in Iraq and Afghanistan were exposed to the dense black smoke from burn pits where everything from IEDs to human waste was incinerated. (Public Domain)

Torres, whose husband, LeRoy Torres, became ill almost immediately after his return from Iraq in 2008, said that the federal ruling grants them evidence that determines that there is a strong association between lung disease and exposure to burn pits.

“Thousands of Veterans have lost their careers, some have taken their own lives and their widows are left without benefits,” Torres said. “The actual numbers are obscured by a broken system. Unless we address this honestly, unknown thousands even millions will fade into history as the invisible and unacknowledged casualties of our country’s longest war.”

“We are tired of being stuck in a system of bureaucracy.  Being told your lung disease or cancer is psychosomatic, losing your job and being denied benefits is only something the VA can fix.”

While Landry has been able to keep her symptoms under better control through diet and constant care, she fears what the future may bring.

“The progression of my disease is scary for me,” she says. “Will the nodules on my lungs turn to cancer? We don’t know?”

“I knew what danger I was going to face when I went to Iraq, but I never imagined that I would bring it back home.”