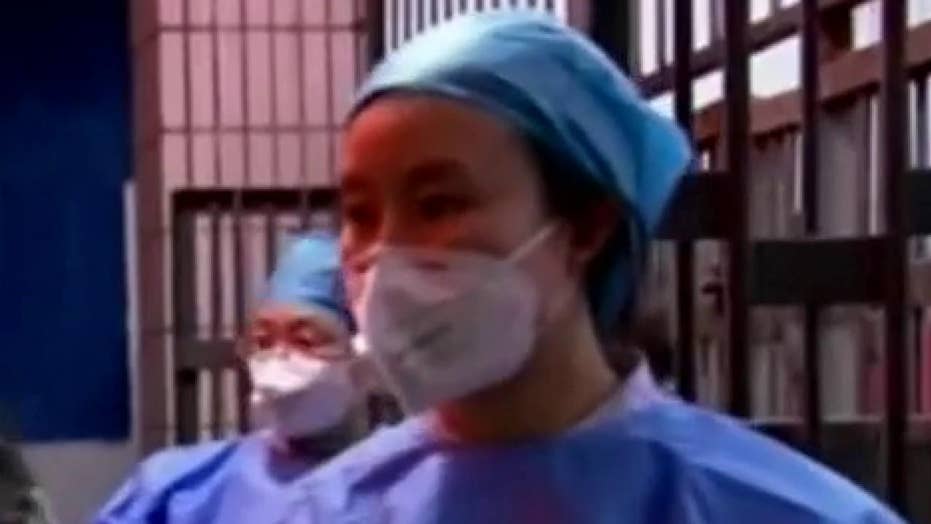 Coronavirus: Nearly 50 people have died in China from coronavirus outbreak

Dr. Michael Pillsbury weighs in on the deadly coronavirus that’s spreading around the globe.

A group of masked protesters in Hong Kong on Sunday ignited a firebomb inside a newly built residential building the government had planned to use as a quarantine zone for those infected by the recent outbreak of the coronavirus, according to reports.

CALIFORNIA CASE OF CORONAVIRUS IS 3RD CONFIRMED IN US

About 200 protesters had gathered in Wah Ming Road leading up to the recently built but vacant Fai Ming Estate located in Hong Kong’s Fanling District, South China Morning Post reported.  Several protesters wearing black masks ran into the public housing unit and ignited a Molotov cocktail before running out of the building, Reuters reported. Clouds of black smoke were then seen coming out of the unit. Fire alarms went off. Some windows also had been smashed, according to Reuters. Videos surfaced online showing protesters in black protective masks fleeing the fiery scene.

“In the evening, rioters damaged the traffic lights at the junction of Fai Ming Road and Wah Ming Road, and set fire to the lobby of buildings by throwing petrol bombs,” Hong Kong Police said in a statement. “These destructive acts have posed a grave threat to the safety of people at [the] scene. Police warn all rioters to stop these unlawful acts. Police will take resolute enforcement actions.”

Firefighters responded to put out the blaze. The damage appeared to be contained to the building’s lobby. Hundreds of riot police also descended on the area. At least one person was arrested, Reuters reported. The Center for Health Protection later announced it suspended the plan to turn the public housing block into a quarantine zone, Hong Kong Free Press reported.

Protesters had created barricades and lined the road leading up to the building with bricks. They opposed the government's decision to use the newly built building as a quarantine zone, fearing its location near a school and the city’s main residential area posed too great of a risk for infection.

Six people in Hong Kong had been diagnosed with the Wuhan coronavirus as of Sunday. The Hong Kong government elevated its response to "emergency" level, instituting a series of school closures, flight suspensions, event cancellations and theme park closures -- including shutting down Hong Kong Disneyland.

Hong Kong Chief Executive Carrie Lam had signaled in a speech Saturday that the Fai Ming Estate could have been used as either a quarantine zone or a place to house medical staff fighting the outbreak, the South China Post reported.

By Sunday, Lam issued a measure banning all residents of the Chinese Hubei Province, where the outbreak originated, and anyone who visited the province within the past 14 days from entering the city. The ban did not apply to Hong Kong residents.

The outbreak, which originated in the Chinese city of Wuhan, has claimed the lives of at least 56 people – most of whom perished in mainland China. Hong Kong is trying to prevent the coronavirus from spreading from the mainland to the world financial hub, which has already been grappling with months of sometimes violent anti-government, pro-democracy demonstrations.

The novel virus has sickened nearly 2,000 people worldwide. Like the SARS virus in 2002-03, the new coronavirus is thought initially to have been transmitted from animals to people via the consumption of exotic wildlife. The third case of coronavirus in the U.S. was confirmed in Southern California on Saturday, according to the Orange County Health Care Agency's Communicable Disease Control Division. Canada, Australia and Malaysia also reported their first cases Saturday.