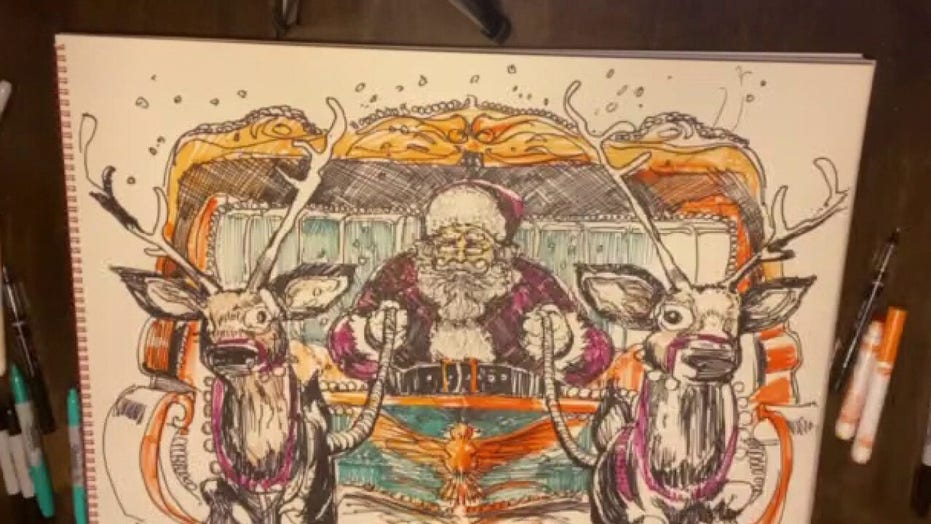 BETHLEHEM, West Bank – A stream of marching bands joyously paraded through Bethlehem on Thursday, but few people were there to greet them as the coronavirus pandemic and a strict lockdown dampened Christmas Eve celebrations in the traditional birthplace of Jesus.

Similar subdued scenes were repeated across the world as the festive family gatherings and packed prayers that typically mark the holiday were scaled back or canceled altogether. In Australia, worshippers had to book tickets online to attend socially distanced church services. Pope Francis was set to celebrate Mass in a near-empty Vatican service early in the evening, hours before a curfew went into effect in Italy.

Celebrations elsewhere in Europe were canceled or greatly scaled back as virus infections surge across the continent and a new variant that may be more contagious has been detected. Thousands of truck drivers and travelers were trapped in mass gridlock at Britain’s Dover port on Christmas Eve, held up from crossing to France by the slow delivery of coronavirus tests demanded by French authorities.

Italian Carabinieri officers check vehicles in front of St. Peter's Basilica at the Vatican, Thursday, Dec. 24, 2020. Italians are easing into a holiday season full of restrictions, and already are barred from traveling to other regions except for valid reasons like work or health. Starting Christmas eve, travel beyond city or town borders also will be blocked, with some allowance for very limited personal visits in the same region. (Cecilia Fabiano/LaPresse via AP)

In Bethlehem, officials tried to make the most out of a bad situation.

"Christmas is a holiday that renews hope in the souls," said Mayor Anton Salman. "Despite all the obstacles and challenges due to corona and due to the lack of tourism, the city of Bethlehem is still looking forward to the future with optimism and will celebrate Christmas in all its human and religious meanings."

Raw, rainy weather added to the gloomy atmosphere, as dozens of people gathered in the central Manger Square to greet the Latin Patriarch, the top Catholic clergyman in the Holy Land. Youth marching bands playing Christmas carols on bagpipes, accompanied by pounding drummers, led a procession ahead of the patriarch’s arrival early in the afternoon.

Thousands of foreign pilgrims usually flock to Bethlehem for the celebrations. But the closure of Israel’s international airport to foreign visitors kept tourists away this year. The Palestinian Authority last week banned intercity travel in the areas it administers in the Israeli-occupied West Bank, keeping even Palestinian visitors away.

A Palestinian National security unit is deployed in Manger Square, adjacent to the Church of the Nativity, traditionally believed by Christians to be the birthplace of Jesus Christ, ahead of Christmas, in the West Bank city of Bethlehem, Wednesday, Dec. 23, 2020. (AP Photo/Nasser Nasser)

The restrictions limited attendance to dozens of residents and a small entourage of religious officials. Evening celebrations, when pilgrims normally congregate around the Christmas tree, were canceled, and Midnight Mass celebrations were limited to clergy. The 85-year-old Palestinian president, Mahmoud Abbas, who usually attends the solemn occasion, said he would not participate.

The coronavirus has dealt a heavy blow to Bethlehem’s tourism sector, the lifeblood of the local economy. Restaurants, hotels and gift shops have been shuttered.

"The atmosphere of the Christmas celebrations is so beautiful in Bethlehem," said Balqees Qumsieh, a Bethlehem resident. "This year everything will be different."

Elsewhere, there was little holiday cheer for tourism-dependent Thailand, as the country grapples with an unexpected spike in virus cases, despite strict border controls that have effectively blocked travelers from entering the kingdom.

A worker wearing a face mask to help prevent the spread of coronavirus prepares an artificial Christmas tree outside a shopping mall that would normally be busy with foreign tourists in Bangkok on Wednesday, Dec. 23, 2020. Thailand has kept the coronavirus largely in check for most of the year but is facing a challenge from a large outbreak that threatens to undo months of efforts to contain the virus and hasten recovery of an ailing economy that relies heavily on tourism.(AP Photo/Adam Schreck)

The Christmas and New Year’s holidays are typically peak season for the tropical country’s hotels, restaurants, bars and often naughtier-than-nice entertainment venues. Many of those businesses have decided it’s not even worth opening or have gone out of business.

Shopping malls that cater heavily to foreign tourists are putting on a brave face, erecting towering artificial Christmas trees. Some hotels that remained open are putting on their usual buffets for resident expats and members of Thailand’s moneyed elite.

But any hopes of a return to normalcy were dashed in recent days as the country recorded a new cluster of more than 1,000 cases. Authorities responded by announcing fresh restrictions on Bangkok and other areas that included canceling New Year’s Eve celebrations.

Australians had until recently been looking forward to a relatively COVID-19-free Christmas after travel restrictions across state borders relaxed in recent weeks in the absence of any evidence of community transmission. But holiday plans were thrown into chaos when three cases detected on Dec. 17 exposed a new cluster in northern Sydney. As additional cases were detected, states again closed their borders.

Peta Johnson, a resident of northern Queensland, had been preparing to welcome her recently widowed father from Sydney. Travel restrictions have put the trip on hold until February.

"He is absolutely heartbroken because he wants to have some time with us and have a break from Sydney and everything that has been going on," she said.

Churches across the country were requiring worshippers to reserve tickets for services. Brett Mendez, spokesman for the Perth Archdiocese, said St. Mary’s Catholic Cathedral would limit services to 650 worshippers, just over half the normal level.

While many places around the globe were keeping or increasing restrictions for Christmas, Lebanon was an exception. With its economy in tatters and parts of its capital destroyed by a massive Aug. 4 port explosion, Lebanon has lifted most virus measures ahead of the holidays, hoping to encourage spending. Tens of thousands of Lebanese expatriates have arrived home for the holidays, leading to fears of an inevitable surge in cases during the festive season.

Lebanon has the largest percentage of Christians in the Middle East — about a third of its 5 million people — and traditionally celebrates Christmas with much fanfare.

But even with restrictions relaxed, a severe economic crisis was pouring gloom over the holidays this year. The streets of Beirut, traditionally lit with Christmas lights, are more subdued. Shops may have new products, but few people are buying

A giant Christmas tree in downtown Beirut is decorated with the uniforms of firefighters to commemorate those who died in the port explosion. Another tree represents Beirut’s ancient houses destroyed in the blast.

"People around us were tired, depressed and depleted, so we said let’s just plant a drop of joy and love," said Sevine Ariss, one of the organizers of a Christmas fair along the seaside road where the explosion caused the most damage.