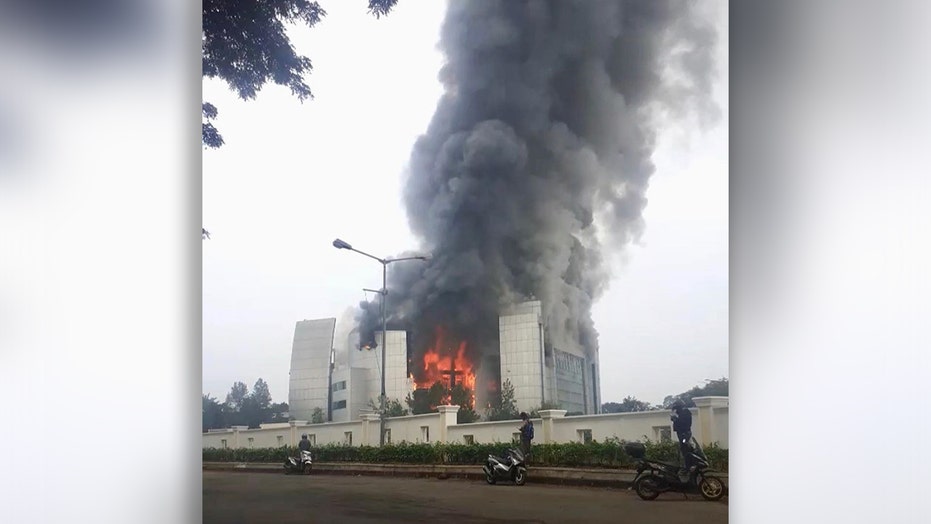 A massive Christian church outside Indonesia's capital, where authorities stopped a 2011 Easter bombing plot by Islamic terrorists, was engulfed in flames Monday morning.

No casualties were reported at the Church of Christ Cathedral, near Jakarta. The fire began at 7 a.m. and was successfully extinguished at 11:30 a.m. The cause of the fire is unknown; an official investigation is ongoing.

Christ Cathedral Indonesia outside Jakarta, where an Easter bombing plot by Islamic terrorists was thwarted, was engulfed in flames Monday morning. (Adria Jerusha)

"My hand was just shaking. We pour our heart into this church," Riza shared, fighting back tears, adding, “God is telling us to think of and take care of others, and when we do so, He will be the one to take care of us."

The church is raising funds for COVID-19 relief as the nation reports its highest single-day rise since the virus was first detected in early March, Jakarta Globe reports. Southeast Asia's largest country now has more than 9,000 confirmed cases and at least 765 deaths.

"We are indeed continuing to raise funds for our COVID-19 Relief in the midst of all this," Stephanie told Fox News.

"Our mission as a Church has always been about caring about and being an impact for people beyond our church walls, and not merely our own congregation," she said. "No matter what happens to the building, the Church still stands."

Firefighters were able to stop the church building from completely burning down Monday morning outside Jakarta. (Christ Cathedral)

The church's Social Impact team started the campaign in March and will continue raising funds through Kitabisa, a crowdfunding platform in Indonesia, for hospital/healthcare workers, refugees, people with disabilities, teachers and other professions who suffered from severe pay cuts or have been laid off, as well as impoverished families, including children and the elderly.

"In this moment, God is asking us to think of and take care of others, and when we do, He will be the one to take care of us," Stephanie said.

The main sanctuary of Christ Cathedral was destroyed by a fire Monday morning but the church is continuing online worship and raising funds for COVID-19 relief. (Christ Cathedral)

Christ Cathedral will continue online church services on their YouTube channel by recording at home.

"We won’t let anything stop us from being the Church itself, from worshipping Jesus and following His example to be a blessing by helping those out there who need our help," she concluded.

The cross in Christ Cathedral's Upper Room, a prayer room above the main sanctuary, remains intact despite being engulfed in flames. (Christ Cathedral)

And on Wednesday, the team noticed the cross in their prayer room, called the Upper Room, was still intact, despite being above the main sanctuary and being engulfed in flames.

"The Cross prevails even in the fire. These images really lifted my spirits today," the pastor added. "Hope [this] will inspire people."

Inside the 8,000-member Christ Cathedral that burned down Monday. (Adria Jerusha)

Reactions poured in from around the world.

Sean Feucht, a Bethel Music worship leader and pastor, recalled the last time he preached in the building, almost exactly one year ago, when a pastor was reportedly imprisoned.

"We have partnered for so many epic gatherings, events and rallies throughout the years," Feucht wrote. "The Church of the East knows and has walked through persecution and the testing of their faith like we can only imagine."

He added, "We have so much to learn and receive from them...especially in this season!"

Christ Cathedral, which was founded in 2008, is a part of the Indonesia Bethel Church (GBI) denomination, a group of Christian Pentecostal churches in Indonesia.

In 2011, police thwarted an Islamic terror plot on Easter, uncovering five massive bombs buried beneath a gas pipeline near a Catholic church in the same area as Christ Cathedral. An Indonesian court sentenced an Islamist extremist to 18 years in prison for the terror attempt, according to Reuters.

The most populous Muslim nation is on the 2020 World Watch List from persecution watchdog Open Doors USA and has been battling Muslim extremists since 2002 when al-Qaida-linked militants attacked two nightclubs on Bali island, killing 202 people, many of them foreign tourists.