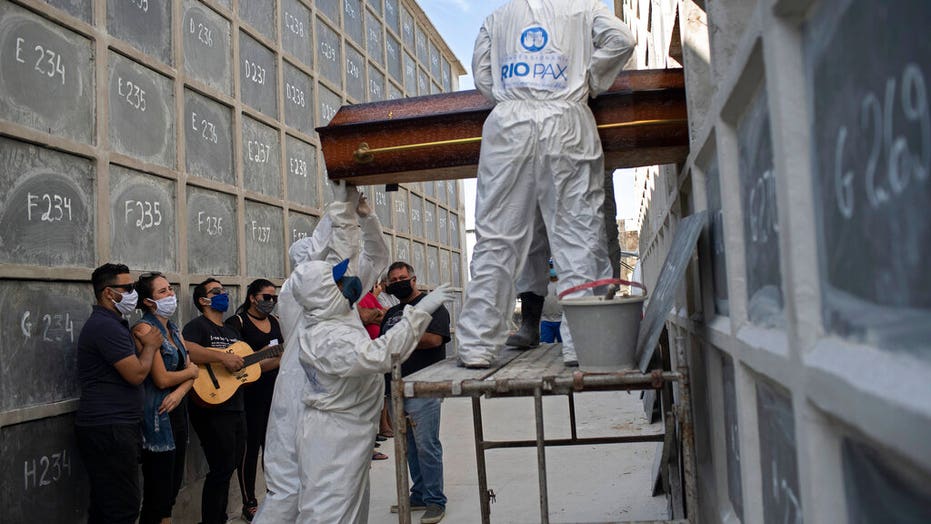 “What we are seeing are scenes from a horror movie."

Those words came from Artur Virgilio, the mayor of Manaus, about the coronavirus crisis developing in the middle of the Amazon rainforest in northern Brazil.

The city had a record number of burials in April -- about 100 a day, or triple the average -- forcing authorities to do many en masse in improvised cemeteries.

“We aren’t in a state of emergency. We are in a state of utter disaster, like a country that is at war but has already lost," Virgilio said.

Relatives attend the burial of the remains of a person suspected to have died of COVID-19 disease, at the Vila Formosa cemetery in Sao Paulo, Brazil, Thursday, April 30, 2020. (AP)

The city's public health system has already collapsed, with 100% of intensive-care beds occupied and hundreds of people left untreated.

Relatives of victims report that burials have been carried out collectively, with some people left not knowing if their loved one was, in fact, buried.

In some cases, corpses were placed on top of each other in graves, according to reports. The official cause of death is often listed as "unknown" or "severe acute respiratory failure," which experts say is contributing to a massive under-count of coronavirus cases.

Between April 21 and April 28, the government reported 118 confirmed coronavirus deaths in Manaus. But in that same week, more than 200 people were buried due without a determined cause of death, in addition to 395 due to respiratory failure or suspected coronavirus.

According to one projection, the number of burials in Manaus may reach 4,200 later this month..

The crisis in Manaus could be a sign of things to come for the whole country.

Although conditions in São Paulo, the largest city in South America, and Rio de Janeiro, are not as dire, experts warn that the country faces a coronavirus surge similar to those that devasted Italy, Spain and parts of the United States. Or even worse,

The family of Carmen Valeria watch her remains as they are placed into a niche by cemetery workers at the Iraja cemetery in Rio de Janeiro, Brazil, Thursday, April 30, 2020. The family suspects the 76-year-old died from COVID-19. (AP)

Edmar Santos, Rio’s state secretary of health, said in a television interview that a "collapse" of the nation's health care system could happen this month.

"What we expect for the next three to four weeks is that Brazil will experience the same collapse that [happended in] Italy, Spain and the United States. Rio has over a thousand people waiting for a bed, with 361 patients in serious condition."

The government is weighing a possible nationwide lockdown if COVID-19 cases keep surging.

Getting people to engage in social distancing, however, can be easier said than done. The country's president, Jair Bolsonaro, has sabotaged efforts to impose effective social distancing, firing his health minister who defended the move, and attacking covid-19 as “hysteria”.

Asked about Brazil's rising death toll, the far-right politician recently declared: “So what?”

BRAZIL SEES SPIKE IN CORONAVIRUS CASES, WITH SOME HOSPITALS OVERLOADED

His supporters seem to be following his words.

This combo shows freshly dug graves, top, on April 1, 2020 at the Vila Formosa cemetery in Sao Paulo, Brazil, compared to one month later on April 30 with the graves filled in. Sao Paulo authorities dug hundreds of new graves in anticipation of an increase in the city's death rate amid the presence of the new coronavirus pandemic.  (AP)

A study conducted by researchers of Fundação Getúlio Vargas (FGV) and Cambridge University found that social isolation declined among Bolsonaro’s supporters after his speeches in March, using geolocation data on more than 60 million mobile devices.

Bolsonaro was elected with over 55 million votes and, according to a recent poll, his popularity reaches almost 40% of the electorate, which would represent around 40 million people. According to economist Luis Meloni, from Universidade de São Paulo, the president has shown "impressive" resilience amid the health crisis.

But the resignation of his health minister, Luiz Henrique Mandetta, who had strong popular approval, and the loss of the highly popular justice minister, Sérgio Moro, who resigned because he disagreed with the president's actions, may have greater consequences for Bolsonaro, Meloni said.

"The president has benefited from social isolation because people contrary to his presidency are at home, unable to protest, although every day there are records of people protesting at their windows. But those who support him have been out on the streets showing support for him. So it is difficult to calculate, at that moment, the possibility of him falling from power, but, in fact, the size of his popularity is impressive, even with the current disastrous situation of Brazil in the fight against the epidemic."

Moro, on his way out, said the president tried to influence Federal Police investigations involving his sons, Carlos Bolsonaro and Eduardo Bolsonaro. This week, the president gave another sign in this direction: He appointed a friendly delegate to the post of director of the Police, which was blocked by the Supreme Federal Court due to a conflict of interest.

The Supreme Court also authorized the opening of an investigation against the president, and political parties filed a request for impeachment in the House of Representatives.

In the meantime, rising numbers of coronavirus deaths and a looming economic crisis are likely to seriously damage Bolsonaro.

As of Saturday morning, Brazil had more than 92,000 confirmed cases and more than 6,000 deaths. Experts believe, however, that the real numbers could be up to 15 times higher than official statistics.