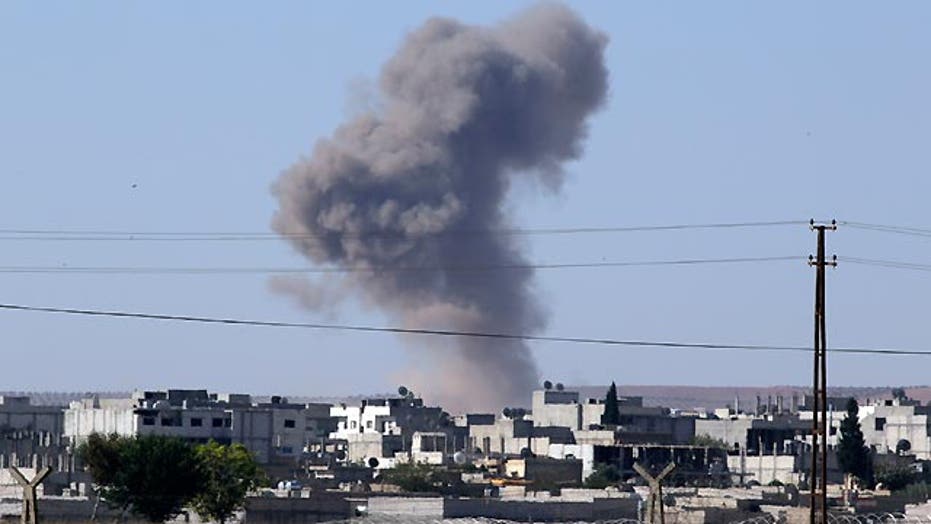 Kurdish forces struggling to drive ISIS out of Kobani

U.S.-led coalition airstrikes hit Islamic State forces laying siege to the Syrian city of Kobani on Wednesday, Kurdish officials and military commanders said, as domestic pressure escalated in Turkey over the refusal by the Ankara government to come to the aid of the city’s predominantly Kurdish population.

A day after Turkish President Recep Tayyip Erdogan and the U.S. declared the fall of Kobani imminent, Islamic State tanks and artillery on the outskirts of the city were struck by coalition warplanes, said Redur Xelil, spokesman for the Kurdish militia defending the city. His claims couldn’t be immediately be confirmed.

Xelil said the air raids had helped the militia beat back the fighters of Islamic State, which has taken over vast stretches of Syria and Iraq and now threatens a city on Turkey’s doorstep, advancing into its eastern outskirts Monday.

US prods Turkey over inaction against ISIS

"For the first time, the U.S. strikes had some effect," Xelil said. "They helped us push back many of the fighters from eastern Kobani, but clashes still continue."

Kurdish leaders have complained about the ineffectiveness of airstrikes in deterring Islamic State. Erdogan urged the U.S. and its allies Tuesday to train and arm moderate Syrian rebels, calling the air raids insufficient to defeat the extremist group.

"If these strikes continue to be as successful, they may help us to defend the city," she said. "But the [Islamic State] has started to send more fighters and heavy weaponry here, so the clashes will continue to be heavy in eastern Kobani."