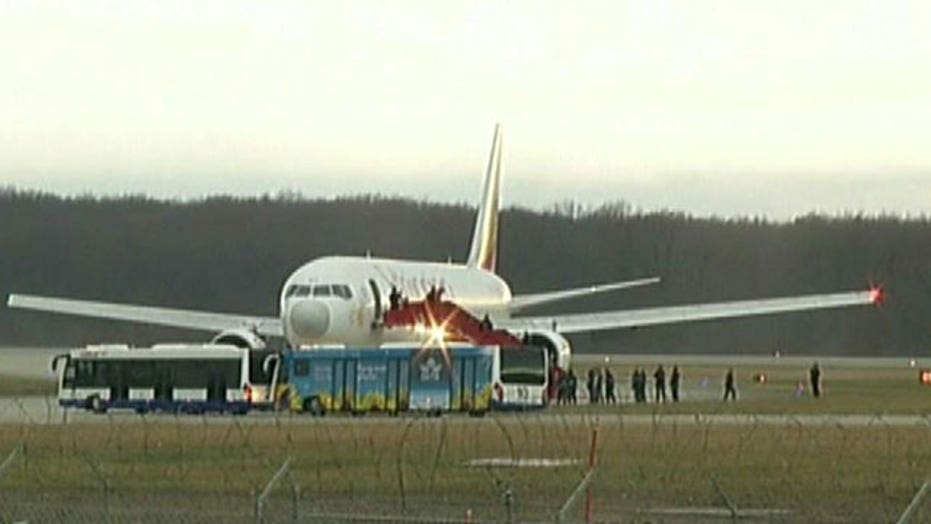 A passenger onboard an Ethiopian Airlines jet that was hijacked by a co-pilot – who guided the plane to Geneva instead of Rome – said the co-pilot threatened to crash the plane if the pilot kept trying to get back into the cockpit.

The Italian news agency ANSA quoted passenger Francesco Cuomo as saying the pilot was demanding that the hijacker open the door and tried to break it down without success.

Cuomo, 25, was quoted as saying the hijacker, speaking in poor English on a loudspeaker, threatened to crash the plane in response and then the oxygen masks came down.

The hijacker surrendered to police after landing in Switzerland and all passengers were safe. Police escorted the plane's passengers out one by one, their hands over their heads, from the taxied plane to waiting vehicles.

Urs Holderegger, a spokesman for the Swiss Federal Office of Civil Aviation, confirmed that the plane landed in Geneva at approximately 6:05 a.m. local time Monday.

At a press conference, Geneva police said that the co-pilot had surrendered to police and requested asylum in Switzerland. Geneva airport chief executive Robert Deillon told reporters that the co-pilot was an Ethiopian man born in 1983, while Ethiopia's communications minister, Redwan Hussein, identified him as Hailemedhin Abera.

When the plane landed, police said the co-pilot used rope to exit through the cockpit window.

It wasn't immediately clear why the co-pilot wanted asylum. It also was unclear why he chose Switzerland which, unlike Italy, isn't a member of the 28-nation European Union and where voters recently demanded curbs on immigration.

Geneva prosecutor Olivier Jornot said Swiss federal authorities were investigating the hijacking and would press charges that could carry a prison sentence of up to 20 years.

The Geneva airport was briefly closed while authorities investigated the plane, but departures and arrivals have since resumed.

The plane first sent a distress message while flying over Sudan's airspace en route to Europe, according to Hussein.

"From Sudan all the way to Switzerland, the co-pilot took control of the plane," he said.

Two Italian fighter jets then were scrambled to accompany the plane.

“We had no clue about the hijacking, but got scared when the plane suddenly started diving, it seemed like it was falling from the sky,” Italian passenger Diego Carpelli, 45, told the Corriere della Sera newspaper. Carpelli was returning to his native Rome from a vacation in Kenya with his family.

“Someone in an intimidating tone said we should put on our oxygen masks,” Carpelli said, adding that he was terrified for the rest of the flight.

Redwan said Abera worked for Ethiopian Airlines for five years. He said Ethiopia will ask for his extradition.

"His action represents a gross betrayal of trust that needlessly endangered the lives of the very passengers that a pilot is morally and professionally obliged to safeguard," Redwan said.

Passengers on the plane — 139 Italians, 11 Americans, 10 Ethiopians, five Nigerians and four French citizens, among others — were unaware at the time that it had been hijacked, officials said. Redwan said the plane was carrying 200 people including seven crew.

Swiss authorities at first thought the Ethiopian plane just wanted to land in Geneva for an emergency refueling before realizing it was being hijacked, Geneva police spokesman Eric Grandjean said.

Jornot said the hijacker's chances of winning asylum were slim.

"Technically there is no connection between asylum and the fact he committed a crime to come here," he said. "But I think his chances are not very high."

Both Italy and Switzerland, however, do not extradite those who may face the death penalty at home.

This is at least the second attempted hijacking in the past month. On February 7, a Ukrainian man attempted to hijack a Turkish passenger plane and fly it to Sochi, site of the Winter Olympics. The pilot instead flew the plane to Istanbul, and the man was taken into custody.

Ethiopian Airlines is owned by Ethiopia's government, which has faced persistent criticism over its rights record and alleged intolerance for political dissent.

The government has been accused of targeting journalists, and opposition members, as well as the country's minority Muslim community.

There have been numerous hijackings by Ethiopians, mostly fleeing unrest in the East African nation or avoiding return.

An Ethiopian man smuggled a pistol onto a plane and hijacked a Lufthansa flight going from Frankfurt to Addis Ababa in 1993. He demanded it be flown to the U.S. because he was denied a visa.

In 1996 a flight from Ethiopia to Ivory Coast via Kenya was seized by hijackers who then demanded to be flown to Australia. That flight ran out fuel and crashed off the island nation of Comoros, killing 125 people, according to the Aviation Safety Network.

In 2002, two passengers armed with small knives and an explosive device attempted to hijack a domestic flight but were shot and killed by in-flight security, the Aviation Safety Network reported.