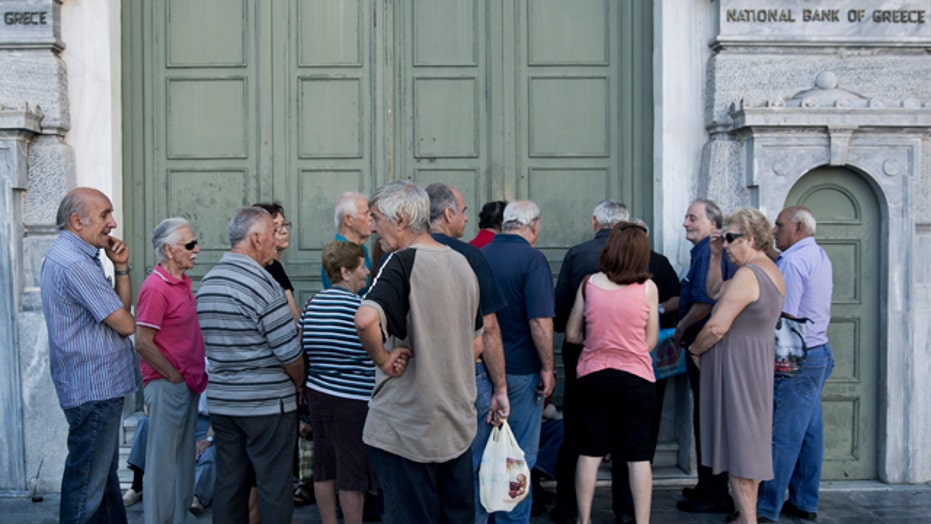 Banks open but still limiting customer withdrawals to $65 a day

As Greece struggles to rebuild its economy crippled by massive debt, some governments around Athens reportedly face a tough mandate: pay your debt by the next century, or else.

Some top-level government officials signed off on the plan last year, a consultant told the Kathimerini newspaper. It reportedly gave the city of Piraeus 13 years, the municipality of Maroussi 166 years, and the municipality of Fyli 2,129 years to pay all their bills.

GRENADE THROWN AT POLICE AT FRENCH EMBASSY IN ATHENS

The far-off deadlines emerged from their debt repayment plans, siphoning off 5 percent from what the interior ministry paid each month, according to the newspaper.

Fyli, which reportedly has a population below 50,000, managed to rack up more than $500 million in debt. Maroussi owed more than $60 million and Piraeus had to pay more than $10 million, the newspaper added.

It's not clear what sort of punishment they'd face for missing the deadline, but Fyli has until the year 4144 to become debt-free. The landlocked region was formed by a merger of three municipalities in 2011.

Greece's left-led coalition government has been struggling to pull the country out of six years of a vicious financial crisis that has devastated its economy and left more than a quarter of the workforce unemployed. Greek officials have pinned their hopes on the U.S. to help persuade some of the country's more reluctant international creditors, such as Germany, to grant it significant debt relief.

Without a cut in its debt, Athens claims, it cannot hope to recover economically -- an argument also supported by the International Monetary Fund.

Greece has been relying on emergency loans from three consecutive multi-billion euro bailouts from other European Union countries using the euro currency, and the IMF, since 2010. While the United States has not been involved in Greece's bailout, Athens has long seen it as an ally that could apply pressure on creditors, according to analysts.

The U.S. has praised Greek efforts to overhaul its economy but has repeatedly stressed the country must continue with painful reforms. The country's bailout funds are disbursed after reviews by international debt inspectors of mandated reforms.