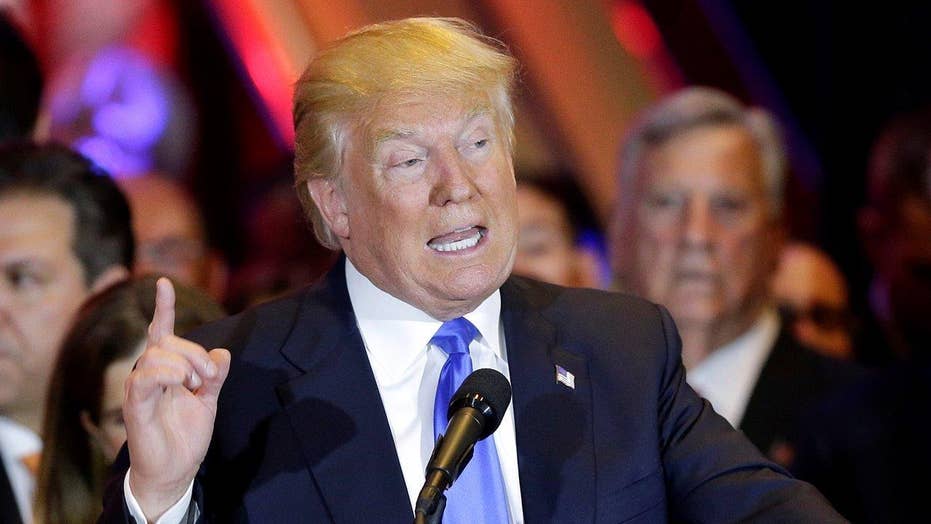 President-elect Donald Trump and his future Chinese counterpart had a cordial conversation Sunday, but it did little to reverse growing tension built on Trump's campaign vow to revisit trade policies that he said leave America at an unfair disadvantage.

In what analysts described as an early warning shot, Chinese state media suggested Beijing could slash imports of American goods -- including iPhones -- if the U.S. imposed steeper tariffs. "Large orders for Boeing planes would switch to Europe, U.S. auto sales in China would face setbacks, Apple phones would essentially be crowded out, and U.S. soybeans and corn would be eradicated from China," the Global Times wrote in an editorial.

WHO WILL TEST PRESIDENT-ELECT TRUMP FIRST ON WORLD STAGE?

Chinese President Xi Jinping congratulated Trump on his election and said cooperation was the "only correct choice" for China and the U.S., the world's two biggest economies.

"At present, there is an important opportunity and huge potential in China-U.S. cooperation," Xi told Trump, according to the reports.

Trump's office said in a statement early Monday that Trump thanked Xi for his well wishes on his election.

"During the call, the leaders established a clear sense of mutual respect for one another and President-elect Trump stated that he believes the two leaders will have one of the strongest relationships for both countries moving forward," the statement said.

During the election campaign, Trump accused China of unfair trade practices and currency manipulation and threatened to slap a 45 percent import tariff on Chinese products. He said China's building of man-made islands in disputed waters in the South China Sea was a sign of its disrespect for America, and vowed to bulk up the U.S. military.

"Trump, coming from a business background, is very astute. We do not believe he will treat China-U.S. trade so childishly," the Global Times editorial continued.

"What I want to point out is that China always maintains close communication with the U.S. side, including Mr. Trump's team, and we will carry on doing that," Geng said at a news conference.

Xi and President Obama are scheduled to meet at the Asia-Pacific Economic Cooperation summit in Peru next week.

Beijing's rivalry with Washington largely boils down to economics, especially China's $334 billion trade surplus with the U.S. and American accusations of unfair subsidies for exporters and the condoning of intellectual property theft.

The sides are also opposed over security in east Asia, particularly China's assertion of its territorial claims in the South China Sea. Beijing has closely aligned its foreign policy with Russia, putting it at odds with the U.S. over issues including the civil war in Syria and the deployment of U.S. anti-missile defenses in South Korea.

Aside from his criticisms of Beijing, Trump has touted his business dealings with Chinese companies, although he is not known at present to have any major investments in the country.

Trump's embrace of a more isolationist foreign policy could also benefit China by weakening U.S. support for longtime Asian allies such as South Korea, Taiwan and Japan, according to analysts.