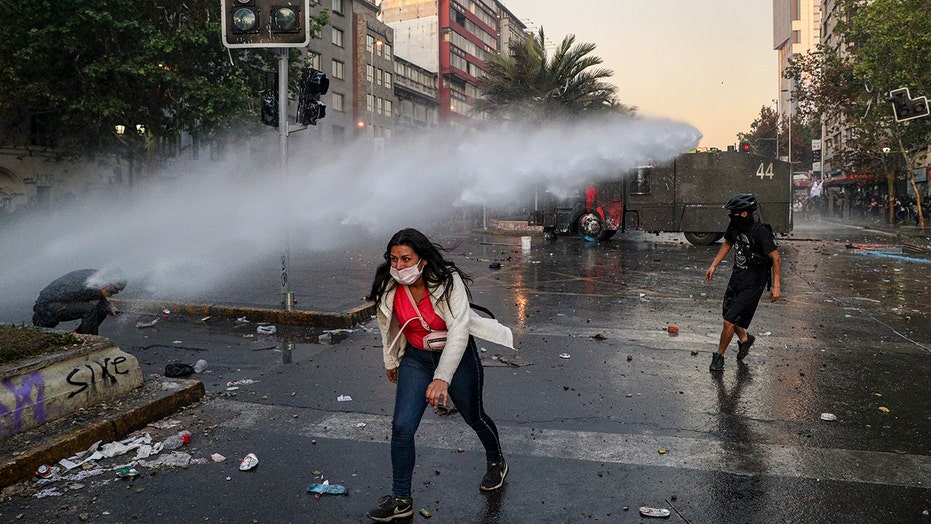 Chile will no longer host next month’s Asia-Pacific Economic Cooperation (APEC) trade summit and the Cop25 climate summit scheduled for later this year, amid a wave of protests and riots that have paralyzed the South American nation.

President Sebastian Piñera said Wednesday that he canceled the two major events so he can focus on his response to the nearly two weeks of nationwide protests over economic inequality.

“We understand perfectly APEC and Cop for Chile and the world but we have based our decision on common sense,” he said in a televised address. “A president needs to put its people above anything else.”

Pinera said that the ongoing protests have led him to call off the two major international summits that his country had been scheduled to host. (Ramon Monroy/ATON via AP)

CHILE'S CONGRESS EVACUATED AS INEQUALITY PROTESTS MADE WAY ONTO GROUNDS

Piñera added that Chile was “deeply sorry for the problems and inconveniences that this decision will mean for both APEC and Cop. But as President of all Chileans, I always have to put the problems and interests of the Chileans, their needs, their desires, and their hopes.”

The APEC summit was set for Nov. 16-17 in Santiago, where U.S. President Donald Trump and Chinese President Xi Jinping were set to sign a modest trade agreement. Under the tentative deal, the U.S. has agreed to suspend plans to raise tariffs on $250 billion in Chinese imports, and Beijing has agreed to step up purchases of U.S. farm products.

“This has been a very difficult decision that causes us great pain,” Piñera said.

An anti-government protester walks away from the spray of a police water cannon in Santiago, Chile, Tuesday, Oct. 29, 2019.   (AP)

Chile has seen 13 days of massive protests to demand greater economic equality and better public services in a country long seen as an economic success story. At least 20 people have died as the demonstrations have been accompanied by some vandalism and arson.

Since the protests began, Chilean businesses have been hit with losses of around $1.4 billion while the metro public transport system in the capital suffered nearly $400 million in damages, Reuters reported.

White House deputy press secretary Hogan Gidley told Fox News on Wednesday that they are waiting for information regarding another location for the APEC.

“We look forward to finalizing Phase One of the historic trade deal with China within the same time frame, and when we have an announcement, we’ll let you know," he added.

U.N. Climate Change Executive Secretary Patricia Espinosa issued a statement saying that "alternative hosting options" were being explored. And a U.N. official, speaking on condition of anonymity for lack of authorization to comment publicly, said that all U.N. venues are being considered as options. Those would include cities such as New York, Geneva, Bonn, Vienna and Nairobi.

The decision is a major blow to Chile's image as a regional oasis of stability and economic development.

Fox News' Kellianne Jones and the Associated Press contributed to this report.