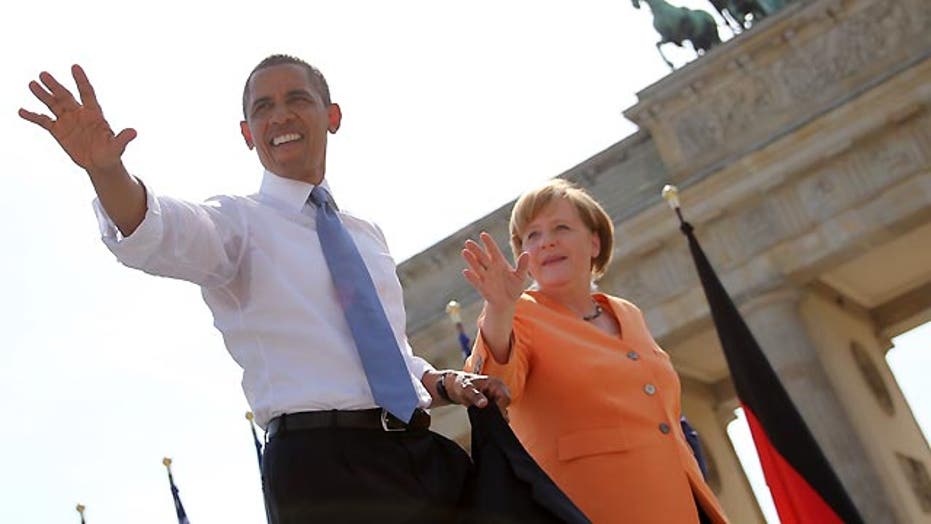 BERLIN (AFP) – Under a blazing sun and waving German and US flags, a crowd in Berlin cheered a call by US President Barack Obama on Wednesday for more transatlantic cooperation, but with a whiff of disappointment in recent American leadership.

Obama himself gave one of the biggest speeches of his 2008 campaign for the White House in Berlin, to an ecstatic crowd of 200,000 hungering for change after the wars and widespread disillusionment here during the George W. Bush years.

Karin Huber-Levy, a 49-year-old American housewife living in Berlin, said Obama's address to 6,000 invited guests was bound to lack the same elan this time round.

"2008 was a different time -- that was pre-marriage romanticism. Now that we're married, we see how the other person looks when they wake up in the morning," she said.

"He had a lot to live up to but I still think he did a fantastic job bringing back some of the enthusiasm that might have faded in our relations.

"This was an important platform to use for his message -- a country that has come back from war and succeeded with American help."

Daniele Vecchiato, a 29-year-old Italian student living in Berlin, was in the audience at Obama's 2008 rally at the Victory Column just a few hundred metres (yards) down the road from the Gate.

He said Obama's call to shrink the US and Russian nuclear arsenals had a powerful resonance in Berlin, which spent four decades on the front line of the Cold War.

"It was extremely important to hear that here," he said.

As if anticipating the speech's themes, German violinist David Garrett revved up the crowd with covers of 1980s US anthems like "Born in the USA" and "Eye of the Tiger" followed by David Bowie's Cold War love song "Heroes" blaring from giant speakers.

But Vecchiato said the fact that the guests had been handpicked this time, and the stifling security measures required for a public address by a US president, had put a damper on the event.

Hanne Eckrodt, a 50-year-old on the board of a local symphony, said she was disheartened that Obama did not go into more detail about what he would do to stop the slaughter in Syria.

But she said she thought Germans were ready to hear the message that they were now called upon to assume more responsibility in the world.

"Expectations were quite high here for the speech," she said. "He didn't only speak about history but said what needed to be done globally now."

Egyptian Yasser Kosbar, a 29-year-old on an international parliamentary fellowship, said he also wanted to hear more concrete words on Syria and other Arab Spring countries rocked by turmoil.

"To be honest I was expecting more from him," he said. "We are in a time of change, especially in my country, but it was a textbook, politically correct speech."

But Kosbar, like several others in the crowd, noted that Obama's championing of gay rights, to which he referred repeatedly in the speech, was a clear example of his moral leadership that was being heard the world over.

"That really reaches hearts and minds," he said.

Brian Eisenach, a 45-year-old electronics firm manager from Colorado, said Obama had found a diplomatic way to tell Germans they need to start punching their weight in the world.

"Germany can't sit on its laurels anymore and he sent out a challenge, but he was subtle about it," he said, referring to Obama's warning to a "complacent" West that history did not stop with the 1989 fall of the Berlin Wall.

"Germany is like his base," Eisenach said, noting Obama's enduring popularity in the country.