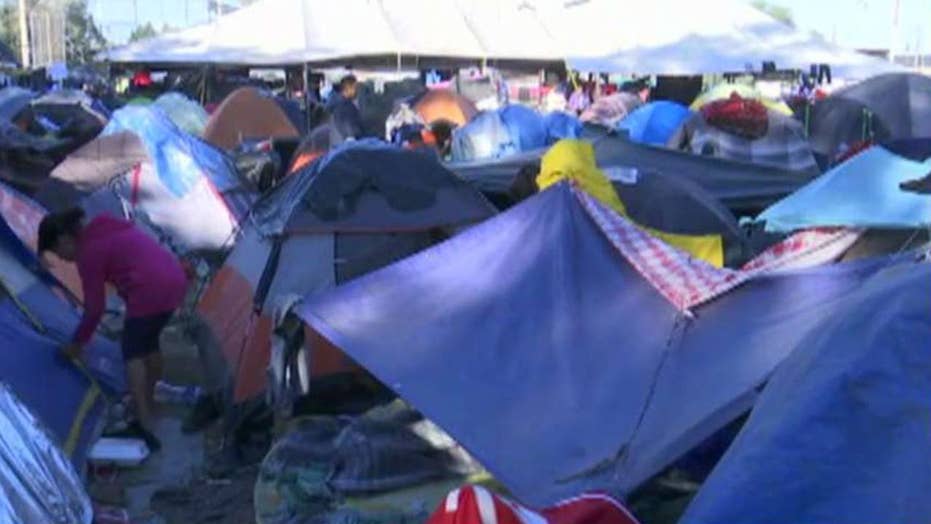 Migrant caravan members losing hope of asylum in US

Frustration and desperation setting in for thousands of Central American migrants stranded in Tijuana who made the journey hoping to enter the U.S.; Jeff Paul reports.

A group of Central American migrants camped at the U.S.-Mexico border said Tuesday that they were "victims of repression" by American border agents who launched tear gas over the weekend at a crowd that included angry rock-throwers and crying children.

"We were only walking [to the border checkpoint] so that we could be visible, so that they would recognize that we are a large group of people who just want to be heard so that international law can protect us as we migrate and seek to improve our lives," the group, calling itself Central American Exodus for Life, said in an English-language statement.

The showdown at the San Diego-Tijuana border crossing has thrown into sharp relief two competing narratives about the caravan of migrants who've aimed to apply for asylum but have gotten stuck on the Mexico side of the border.

"There are international organizations here that accept as fact that we will not be able to enter the United States and that we should be returned," the migrant statement said, "but many of those of us who are travelling have to continue trying because they will kill us if we return to our countries."

With hopes of asylum in the U.S. dimming, thousands of Central American migrants stranded in Tijuana must decide whether to stick it out or return home; Jeff Paul reports.

In their statement, the migrants made five requests, including an end to what they called "arbitrary, manipulative and involuntary deportations"; an accelerated process for applying for asylum in the U.S.; a permanent accommodation for migrants wishing to stay in Mexico, to be negotiated by that country's incoming government; the public release of the identities of deported migrants; and "Human Rights accompaniment at all times and during an detention to prevent the violation of migrant human rights."

U.S. officials Tuesday lowered the number of arrests in Sunday's confrontation to 42 from 69. Rodney Scott, chief of the Border Patrol's San Diego sector, said the initial count included some arrests in Mexico by Mexican authorities who reported 39 arrests. Mexico's Interior Ministry said in a statement that it would immediately deport the people arrested on its side of the border and would reinforce security.

On Monday, President Trump defended the use of tear gas by border agents, saying "they were being rushed by some very tough people."

"Here's the bottom line: Nobody is coming into our country unless they come in legally," the president said.

Scott also defended the agents' decisions to fire tear gas into Mexico, saying they were being attacked by "a hail of rocks."

U.S. border agents fire tear gas into Mexico to stop group of migrants from breaching border; reaction and analysis on 'The Five.'

"That has happened before and, if we are rocked, that would happen again tomorrow," he told reporters.

The city of Tijuana said that as of Monday, 5,851 migrants were at a temporary shelter, 1,074 were women, 1,023 were children and 3,754 were men, including fathers traveling with families, along with single men.

The U.S. military said Monday that about 300 troops who had been deployed in south Texas and Arizona as part of a border security mission have been moved to California for similar work.

The military's role is limited largely to erecting barriers along the border and providing transportation and logistical support to Customs and Border Protection.

U.S. Customs and Border Protection Commissioner Kevin McAleenan said the administration's concerns about the caravan "were borne out and on full display" Sunday.

McAleenan said hundreds — perhaps more than 1,000 — people attempted to rush vehicle lanes at the San Ysidro crossing. Mexican authorities estimated the crowd at 500. The chaos followed what began as a peaceful march to appeal for the U.S. to speed processing of asylum claims.

McAleenan said four agents were struck with rocks but were not injured because they were wearing protective gear.

Border Patrol agents launched pepper spray balls in addition to tear gas in what officials said were on-the-spot decisions made by agents. U.S. troops deployed to the border on Trump's orders were not said to have been involved in the operation.