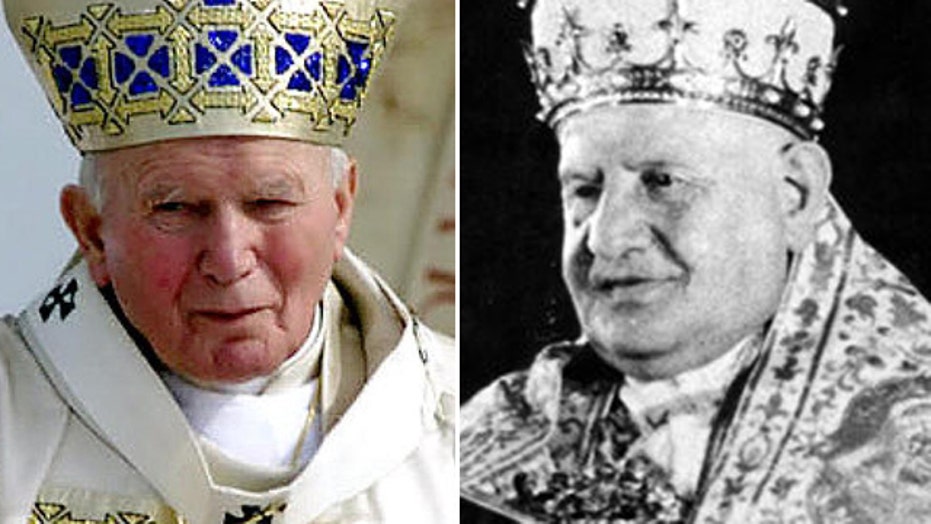 Dr. Matthew Bunson explains their role in shaping a modern church for the faithful and the world

Pope Francis is set to canonize two pillars of the Catholic Church this weekend. The blessed Pope John Paul II and blessed Pope John XXIII will become saints. Vatican insiders are debating what message this move sends to Catholics and the world.

Fox News’ Lauren Green spoke to Dr. Matthew Bunson about the papal canonization. Bunson is the senior correspondent for Our Sunday Visitor Publishing, a Roman Catholic publishing company with connections to the Holy See.

Bunson says John XXIII and John Paul II offer the church “a glimpse of holiness” upon their canonization. He believes both popes have had an impact that goes beyond the Catholic Church and have influenced people around the globe.

Francis has decided to make John XXIII a saint even though the Vatican hasn't confirmed a second miracle attributed to his intercession, but Bunson says this isn’t extraordinary.

“John Paul II set aside the second miracle when he decided to canonize Chinese martyrs during his pontificate,” Bunson said.

The church has never experienced the canonization of two popes simultaneously. “This event has never actually ever happened; this is a very rare occasion indeed when considering something has never happened before in a 2,000 year institution,” Bunson said.

Bunson described the canonization as “the day of four popes.”  Relics of John XXIII and John Paul II will be there, along with Francis and his predecessor, Benedict XVI.

“Technically we’re going to have four popes all together in one canonization,” Bunson said. “It’s an opportunity for all of us to think … to reflect more fully on the papacy, on what saints mean to the church, and the universal quality all four of these popes represent.”

Bunson pointed out a connection these four popes have to one another: they either took part in or were heavily influenced by Vatican II, a meeting of the Catholic Church that sought to address religion’s role in the modern world.

“John [XXIII] wanted to take the holiness of the church and be able to communicate it well to the whole world,” Bunson said.

Watch the full interview with Dr. Matthew Bunson above.