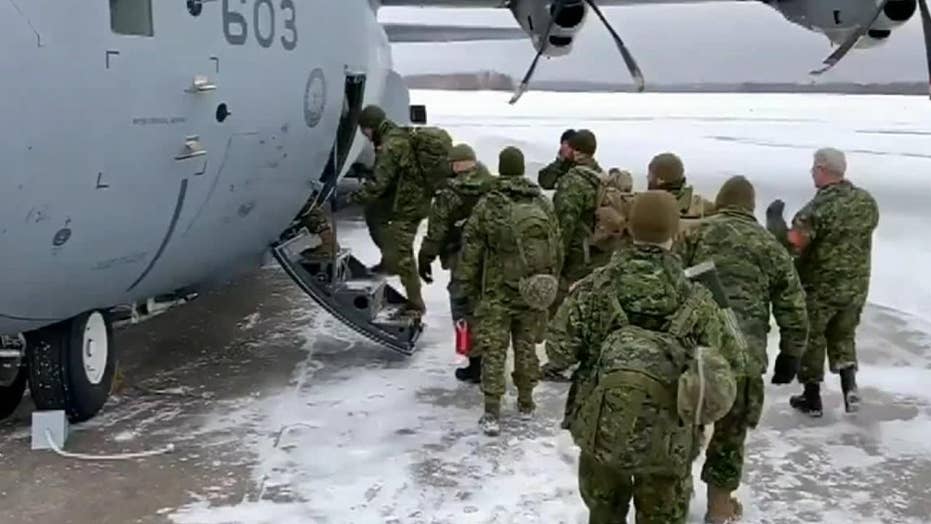 Canadian Armed Forces is helping the people of Newfoundland and Labrador dig themselves out of their homes after a powerful blizzard blew through the area.

Members of the armed forces in Canada are now armed with shovels to help residents in Newfoundland dig out from a monster blizzard over the weekend that led to a state of emergency to be declared for at least five days.

The Canadian Armed Forces said that as of Tuesday, close to 425 troops will be deployed to Newfoundland and Labrador as they assist local officials with opening roadways, wellness checks, and snow removal around critical infrastructure.

The powerful storm, described as being like a blizzard in a hurricane, brought 30 inches of snow to St. John's on Friday into Saturday, breaking the previous record of 27 inches on April 5, 1999. Winds that were recorded between 75 and 98 mph during the snow created snowdrifts nearly six feet high.

"I've never seen the combination of the amount of snow, the rate of snowfall and the wind speed that we've had here over the past couple of days," St. John's Mayor Danny Breen said over the weekend.

A resident makes their way through the snow in St. John's, Newfoundland on Saturday after a major blizzard hit the area. (Andrew Vaughan/The Canadian Press via AP)

In the wake of the storm, officials in St. John's have extended a state of emergency through Tuesday, which allows food stores to be open from 10 a.m. to 6 p.m. Restaurants, fast-food chains, and bars, however, are still not allowed to open until the order is lifted.

The state of emergency ordered by the City of St. John's is still in place, leaving businesses closed and vehicles off the roads in the aftermath of the major winter storm that hit the Newfoundland and Labrador capital. (Andrew Vaughan/The Canadian Press via AP)

Gas stations and pharmacies were permitted to open on Monday, but city officials warned that a parking ban was in effect outside the downtown and business district due to the towering snowbanks limiting space.

"This is a very serious situation here, we don't want any cars on the road," Breen told CBC Radio on Monday.

A resident digs out his walkway in St. John's Newfoundland on Saturday, Jan. 18, 2020. (Andrew Vaughan/The Canadian Press via AP)

The intense snowfall brought St. John's and many other communities to a standstill Friday, then slowed overnight and ended in the capital Saturday morning. Fierce winds kept pushing snow around through the weekend, making clearing any snow from roadways even more difficult.

Residents venturing out Tuesday to stores for the first time faced long lines at grocery stores as most vehicles remained off the roads in the aftermath of the major storm. Major stores reported running out of essential items like bread by 10:30 a.m.

Donna Robbins told CBC News the lines were "madness," telling the news outlet that people in a Dominion grocery store in St. John's couldn't even force their way around the store.

"You just had to stay behind and wait until you got your turn to get your hands into the cooler to pull out something," she said. "Basically it's just grab and go."

Cleanup efforts in the region are expected to take so long that all schools in the St. John's region were ordered closed for the rest of the week.

The Newfoundland and Labrador Department of Transportation and Works shared photos of the progress made since Saturday on some of the area highways that were buried under feet of snow.

The Royal Canadian Mounted Police in Bay Roberts, Newfoundland, said search teams were still looking for 26-year-old Joshua Wall, who remained missing after leaving his home in Roaches Line, a small community about 44 miles west of the capital, to walk to a friend's home.

A state of emergency ordered by the City of St. John's is still in place, leaving businesses closed and vehicles off the roads in the aftermath of the major winter storm that hit the Newfoundland and Labrador capital last week. (Andrew Vaughan/The Canadian Press via AP)

Two men were reported to have died after shoveling snow in the town of Harbour Grace, according to the CBC.

St. John's International Airport has said it would remain closed to commercial flights until Wednesday morning. The airport has been open since Sunday, but only for military, emergency, and medevac flights.