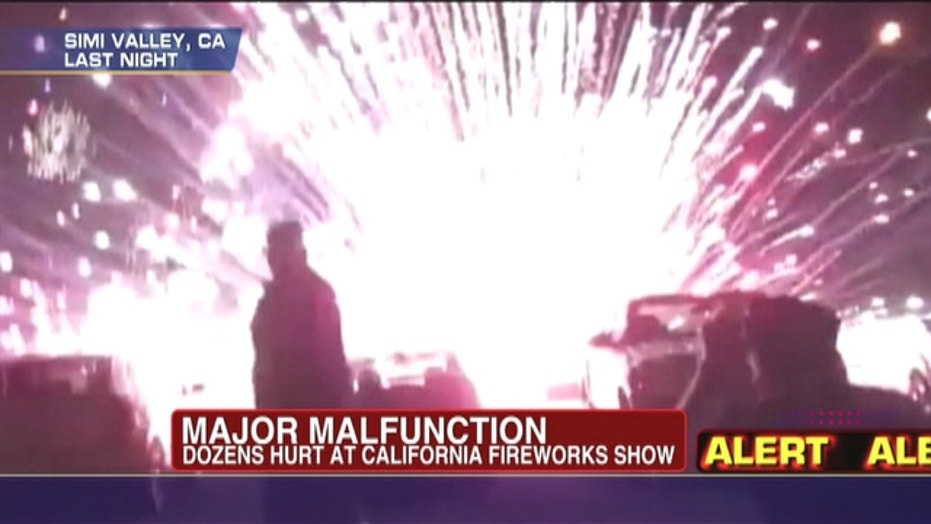 SIMI VALLEY, Calif. – It was supposed to be a Fireworks Extravaganza that lit up the night sky - instead it turned into a dramatic ground explosion.

More than two dozen people were injured Thursday when fireworks malfunctioned at an annual 4th of July show northwest of Los Angeles.

It wasn't clear how many people were in attendance but Parks said the event usually attracts several thousand revelers.

Twenty people were taken to area hospitals with minor to moderate injuries, authorities said. Another eight were treated at the park where emergency crews set up a triage area. A bomb squad was at the park to deactivate the remainder of the fireworks.

A video clip show on KCAL-TV shows a pair of firework blasts at or near the ground. It wasn't known how close people were to the blast's origin. Another clip posted on YouTube shot from a distance shows three ground-level bursts. The fireworks continue for almost another minute before stopping.

"There was a big boom, everybody started running down the street, people were screaming," Justice Allen, 17, of Simi Valley told the Los Angeles Times (http://lat.ms/12pQlBz). "Everybody was just terrified. People hid in bushes."

The annual July Fourth celebration has been sponsored by the city and the local Rotary Club for the past 43 years.

Simi Valley is about 40 miles northwest of Los Angeles.