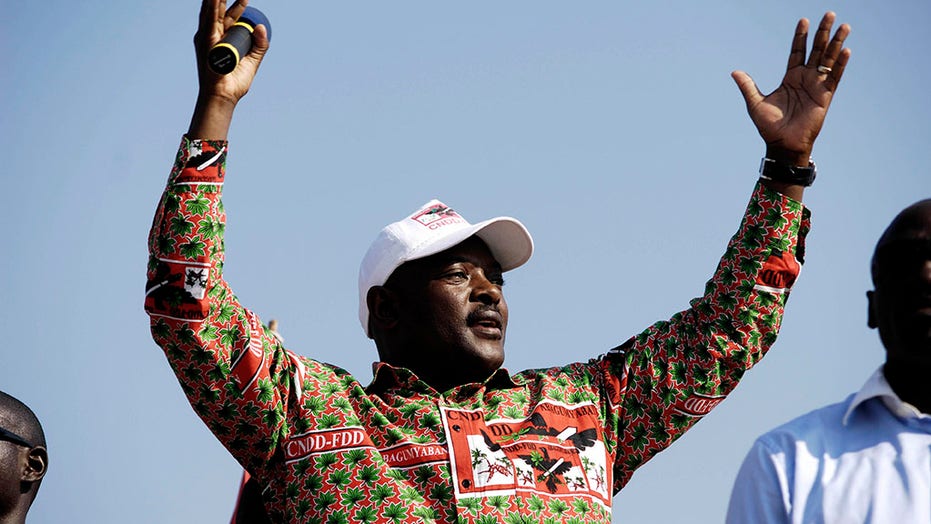 The president of Burundi, whose third-term bid incited a failed coup and drove thousands from the eastern African country in 2015, died from cardiac arrest on Monday at age 55, his government announced.

President Pierre Nkurunziza attended a volleyball match Saturday before reportedly falling ill later that night, government officials said, according to Al Jazeera. He was rushed to a hospital in Karuzi, eastern Burundi, where he began to recuperate Sunday enough to speak with visitors.

By Monday, though, he fell into cardiac arrest and a doctor’s immediate attempt to resuscitate him was unsuccessful.

The Burundi Government said the country will enter a seven-day period of mourning starting Tuesday.

WORLD HEALTH OFFICIAL KICKED OUT OF BURUNDI AHEAD OF COUNTRY'S ELECTION

The former rebel leader ascended into power in 2005 after a civil war in Burundi left 300,000 people dead. In 2015, Nkurunziza announced he would run for a third term – a move opponents called unconstitutional, leading the military to unsuccessfully attempt to overthrow the government. Hundreds died in clashes, and thousands more fled to surrounding countries to escape the violence.

Though an amendment to the country’s constitution allowed Nkurunziza to run for another term this year, the president said he would instead step down in August in a gesture he called the "supreme guide to patriotism," the BBC reported.

After 15 years in power, Nkurunziza was expected to receive $540,000 in retirement pay and a luxury villa.

His political ally, Evariste Ndayishimiye, had since been declared the winner of the recent presidential election held May 20 and was to take Nkurunziza’s place in two months.

Nkurunziza received criticism for holding an election during the coronavirus pandemic – and his own wife was rumored to have tested positive for COVID-19, though no officials have confirmed those claims. He also expelled World Health Organization representatives.

His administration has been accused of a slew of human rights abuses, including "extrajudicial executions, disappearances, arbitrary arrests, sexual violence, extortion, beatings, and intimidation", according to Human Rights Watch.