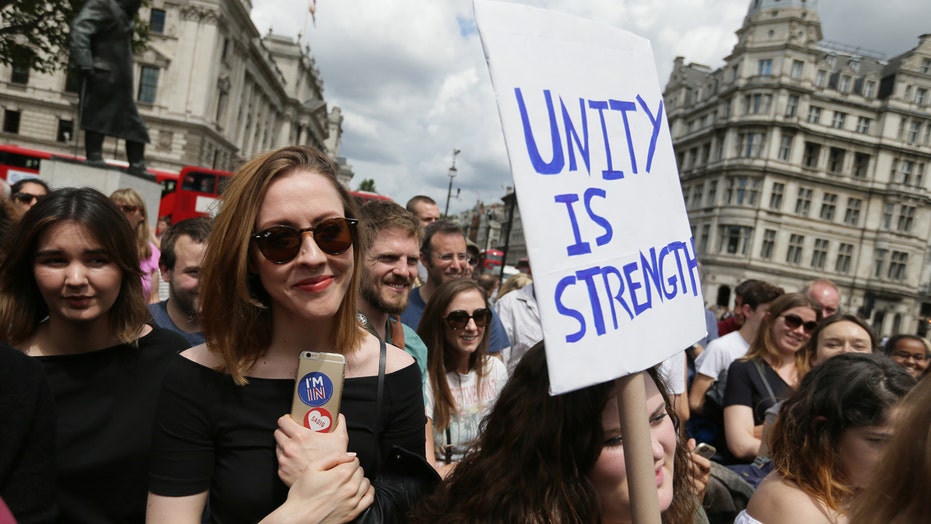 The political turmoil in Britain escalated Monday as several additional high-ranking members of the opposition Labor Party resigned in protest of its leader Jeremy Corbyn's failure to prevent his nation's decision to leave the European Union.

More than 20 members of Corbyn's "shadow Cabinet" -- experts in specific topics like health care or the economy -- stepped down after Friday's vote. One Corbyn ally told the BBC opponents had been plotting a "coup" against the party's leader for months.

Unlike Prime Minister David Cameron of the Conservatives, leader of the failed 'remain' side in the British vote on EU membership, Corbyn has refused to resign. But top Labor officials said they were fearful their party could be seriously hurt if Corbyn leads them into an early election that may be called.

Angela Eagle, the party's spokeswoman on Business Innovation and Skills, chose to step down from the senior party position in light of Britain's vote to leave the EU. She is the most senior member of his team to resign.

Eagle says the party needs a leader "who can unite rather than divide" the party.

Corbyn has appointed lawmakers loyal to him to fill the vacated posts. He insists he will run in any new leadership contest, and says he has the support of the party's grassroots.

European leaders stepped up the pressure on Britain to begin its complex exit from the 28-nation EU immediately, rather than wait several months as British Prime Minister David Cameron prefers.

The leaders of the successful campaign to leave the EU stayed largely out of the public eye, as opponents accused them of lacking a plan to calm the crisis the result has triggered. In his first statement since Friday morning, "leave" leader and former London Mayor Boris Johnson used his column in the Daily Telegraph newspaper to urge unity and say "the negative consequences (of the vote) are being wildly overdone."

He said Britain would forge "a new and better relationship with the EU — based on free trade and partnership, rather than a federal system."

The vote, however, risks causing a political schism in the United Kingdom. Scottish First Minister Nicola Sturgeon said she would "consider" advising the Scottish Parliament to try to use its power to prevent Britain from actually leaving the EU. She said Scottish lawmakers might be able to derail the move by withholding "legislative consent" for a British exit, or Brexit.

"If the Scottish Parliament was judging this on the basis of what's right for Scotland, then the option of saying 'We're not going to vote for something that is against Scotland's interests,' of course, that is on the table," she said of the possibility of withholding consent.

Sturgeon said she believes Scotland's approval is required for the move but conceded the British government would likely take "a very different view."

Thursday's U.K.-wide vote to leave the EU was very unpopular in Scotland, where 62 percent cast ballots to stay, and Sturgeon says she is studying ways to keep Scotland part of the EU bloc.

The Scottish question looms large because Sturgeon also has said another referendum on Scottish independence from Britain is "highly likely" as a result of Britain's EU vote. A Scottish referendum in 2014 ended with voters deciding to remain in Britain, but analysts believe Britain's withdrawal from the EU may strengthen the independence movement.

In Northern Ireland, which also is part of the U.K., Deputy First Minister Martin McGuinness said his priority is forging "special arrangements" to enable Northern Ireland to maintain its EU ties. Some Brexit opponents have also talked of trying to use Northern Ireland's Assembly to try to block Britain's departure.

Northern Ireland voters also expressed a preference for keeping Britain in the EU. The unhappiness with the results in both Scotland and Northern Ireland is adding to the sense that the Brexit vote may over time lead to the breakup of the United Kingdom.

Northern Ireland Secretary Theresa Villiers, Cameron's lead official in Belfast, played down the suggestion that the Scottish Parliament or the Northern Ireland Assembly had the standing to prevent a British departure from the EU.

She said decision-making power resides solely in the British Parliament, which is expected to abide by the results of the referendum, which showed 52 percent of British voters wanted out.

"In the weeks and months ahead, we will be working with both the Scottish government and the Northern Ireland executive on all these matters," she told BBC. "But ultimately it is (the British) Parliament's decision."

Adam Tomkins, a law professor and member of the Scottish Parliament, agreed with this assessment. The Conservative Party legislator tweeted that it was "nonsense" to suggest the Scottish party could block a British departure simply by withholding consent.

The vote is already cutting short Cameron's career. He said after the results that he will resign as prime minister when the Conservative Party chooses a new leader, who will be charged with implementing the separation from the EU.

The new party leader, who will become prime minister, is expected to be in place by October. At that point, he or she may choose to call a quick election to solidify a mandate — and the prospect of an election in the near future may have spurred the revolt against Corbyn.

In her resignation letter, shadow Heath Secretary Heidi Alexander bluntly told Corbyn he had to go. "I do not believe you have the capacity to shape the answers our country is demanding and I believe that if we are to form the next government, a change of leadership is essential," she wrote.

"I regret there have been resignations today from my shadow cabinet," Corbyn responded. "But I am not going to betray the trust of those who voted for me — or the millions of supporters across the country who need Labour to represent them."

In Rome, U.S. Secretary of State John Kerry urged Britain and the EU to manage their divorce responsibly for the sake of global markets and citizens. On Monday, he will be the first senior U.S. official to visit London and Brussels since the referendum, and he said he would bring a message of U.S. support to both capitals.

Pope Francis urged the EU to come up with creative ways to stay together following Britain's vote, saying it's clear "something isn't working in this unwieldy union."

"The European Union must rediscover the strength at its roots, a creativity and a healthy disunity, of giving more independence and more freedom to the countries of the union," the pontiff told reporters as he flew home from Armenia.

The key, he said, is to rekindle the will to stay together with "creativity and new life."