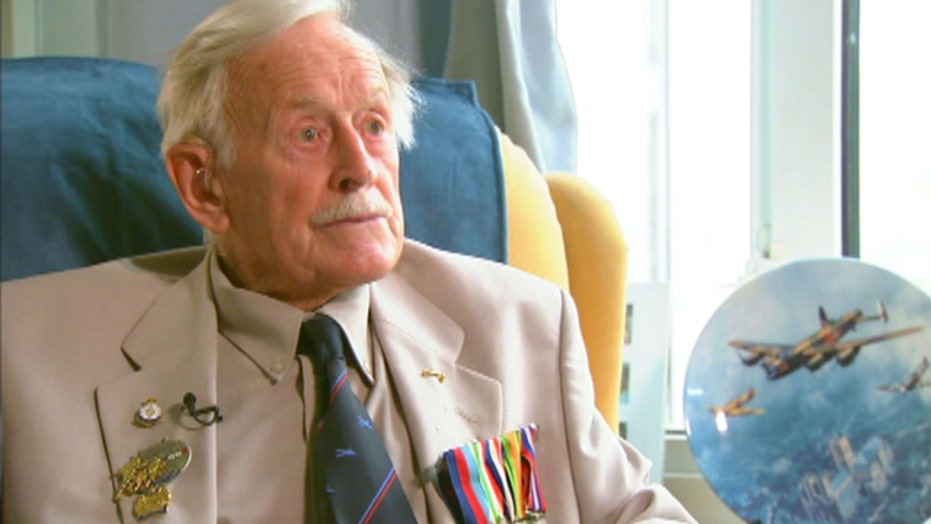 Maurice Macey wore a small caterpillar pin above the impressive row of medals on his lapel, and still remembers it as a symbol of the moment his luck ran out.

The 91-year-old former British Spitfire pilot, who ran numerous sorties over Normandy on D-Day, only to be shot down later that summer, by German anti-aircraft fire.

"I was shot down in flames by anti-aircraft," he explained.  "And when you are flying in a blazing Spitfire, there is only one sensible thing to do, and that is, get out quick. So I eventually managed to get the canopy back, undid my harness to the aircraft, turned it upside down, dropped out....and became an immediate member of the Caterpillar Club.  Because in those days, parachutes were made of silk and the Caterpillar Club emblem is really a silkworm."

Macey also became a prisoner of war, because when he reached the ground he found himself in a field, surrounded by German soldiers.

"I was not very amused, but at least I survived, which is fairly important, I suppose," Macey recalled, with classic British understatement. His ordeal though, was only just beginning.

A warrant officer known as "Hawk Eye" for his ability to spot the enemy before anyone else, Macey helped himself and other Allied prisoners of war survive the Death March away from the advancing Russians, who were moving in the direction of the camps in East Europe where Macey and the others were held. In temperatures as low as minus-40 degrees, and on the verge of starvation, Macey managed to spot what edible vegetation survived the heavy frosts, and collect it for himself and the others. He also knew a thing or two about massage therapy and helped some of injured comrades heal.

One of his prized mementos is a banged up shallow tin bowl that was a lifeline for him.

"It was important to stay as near the front of the column as possible, to give you a better chance of scrounging something and find somewhere to live or sleep. I advised some of my friends to take some sort of container, a tin or something, to melt snow in, to get a drink, and this is what I happened to have, and I haven't been able to part with it, a little life-saver really."

Because Macey, as a Spitfire pilot, had dropped bombs on German installations, the Nazis called him and his fellow pilots "Terror Fliers." Suffice it to say Macey was not his captors' favorite prisoner. The others usually tried to gather around him to shield from German sights the fighter wings on his uniform, although that did not spare Macey their wrath. He was badly beaten on the head, but remains grateful his captors ignored Hitler's orders to shoot all the prisoners when the Russians started advancing.

The march went on for months. The prisoners ultimately fell into Russian hands, before the Americans rescued Macey and the others with him.

He remembers the Americans fondly.

"I remember how wonderfully they treated us, they wined and dined us in the most spectacular fashion, and supplied us with clothes to wear and somewhere to eat," he said. "Marvellous. They were wonderful, and I don't know what, not just the forces but the civilians as well, would have done without the American Red Cross parcels."

Macey did not go back to Normandy for the 70th anniversary of D-Day. There is not much of a group of his closest associates to go with, but he has been back to those shores, and the trip was emotional. It has not been easy for the lucky ones, the survivors, either. Macey's family says he never spoke of the war until one of those recent D-Day anniversaries.