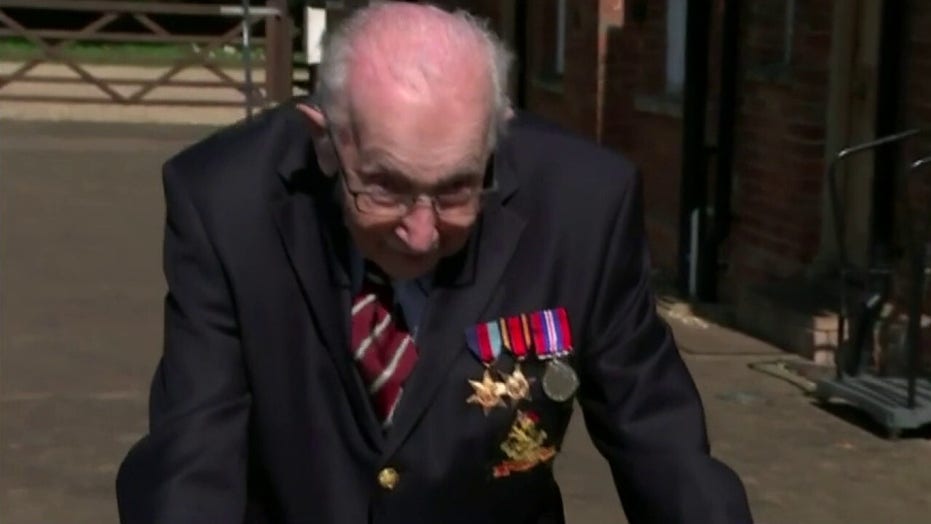 British war veteran Capt. Tom Moore completes challenge of walking 100 laps in his garden by his 100th birthday and raises millions of pounds for the National Health Service.

A British Army veteran commemorated his 100th birthday on Thursday with an additional celebration: he announced he has raised $38 million for doctors and nurses fighting the coronavirus, just by proving he can walk 100 laps around his 82-foot-long garden in Bedfordshire.

Capt. Tom Moore, who uses a walker, completed the challenge on April 16, well ahead of his April 30 birthday. His initial goal was $1,200.

“You truly are an inspiration,” the British Army tweeted Thursday.

"His mature wisdom, no-nonsense attitude and humor in adversity make him an inspirational role model to generations young and old,” added Mark Carleton-Smith, its chief of the general staff.

The U.K. Ministry of Defense also announced Thursday that Moore has been appointed first Honorary Colonel of the Army Foundation College Harrogate.

To help celebrate the milestone birthday, well-wishers from around the world have sent Moore more than 125,000 cards – including Queen Elizabeth II.

“It’s the most amazing outpouring of love for a great man,” James Hodgson, the headmaster of the nearby Bedford School – which is sorting through the mail – told Reuters.

Raised in Yorkshire, Moore trained as a civil engineer before enlisting in the army during World War II. He rose to the rank of captain and served in India and Burma.

“We are absolutely floored by what has been achieved but we’re so happy, so humbled and so proud,” his daughter Hannah Ingram-Moore told the BBC earlier this month. “He’s a beacon of hope in dark times and I think we all need something like this to believe in and it’s for an amazing cause.”

Fox News’ Lucia I. Suarez Sang, Nick Givas and the Associated Press contributed to this report.