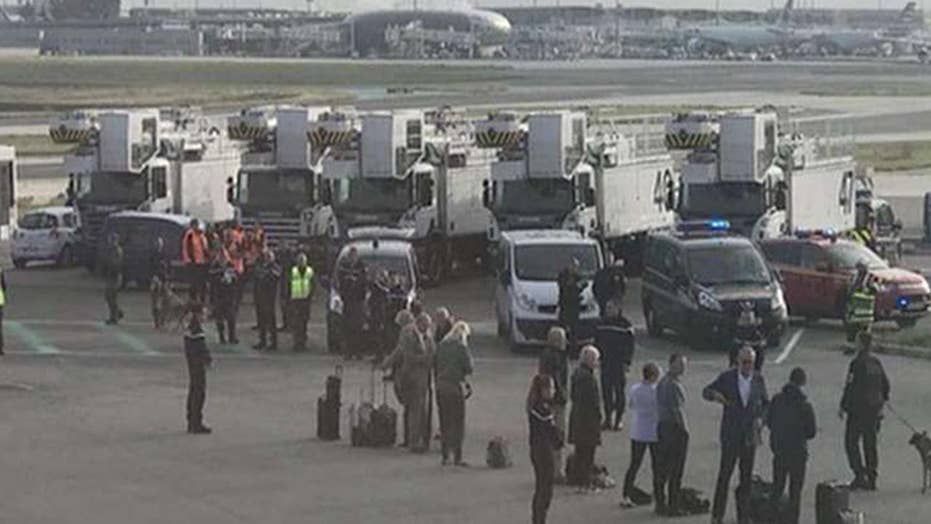 A British Airways plane was held at Charles de Gaulle Airport in Paris Sunday morning after a “direct security threat” sparked an evacuation -- ultimately leading to a false alarm.

Dozens of armed officers and firefighters surrounded the plane headed to London’s Heathrow Airport Sunday after they received a “security alert,” a spokesman for France’s national gendarme service said. James Anderson, who was on the flight, told The Associated Press passengers were initially told there were technical issues.

People are evacuated from a British Airways plane on the tarmac of Charles de Gaulle airport, in Paris, Sunday, Sept. 17, 2017. (James Anderson via AP)

"The pilot then said there had been a direct security threat involving our flight," the 20-year-old entrepreneur said.

The plane was immediately evacuated. Each passenger’s luggage was individually searched and the aircraft was examined, delaying the flight by at least an hour. Authorities later determined the threat was a false alarm.

Anderson detailed the ordeal on Twitter and said the pilot was “extremely calm and composed” and handled the possible threat “wonderfully.”

The Charles de Gaulle Airport confirmed the security search was complete on Flight BA303 and passengers were heading back on board to depart for London.

People are evacuated from a British Airways plane, on the tarmac of Charles de Gaulle airport, in Paris, Sunday, Sept. 17, 2017. (James Anderson via AP)

"The safety and security of our customers and crew is always our top priority. Additional security checks are being carried out as a precaution," British Airways said in a statement when asked about the flight.