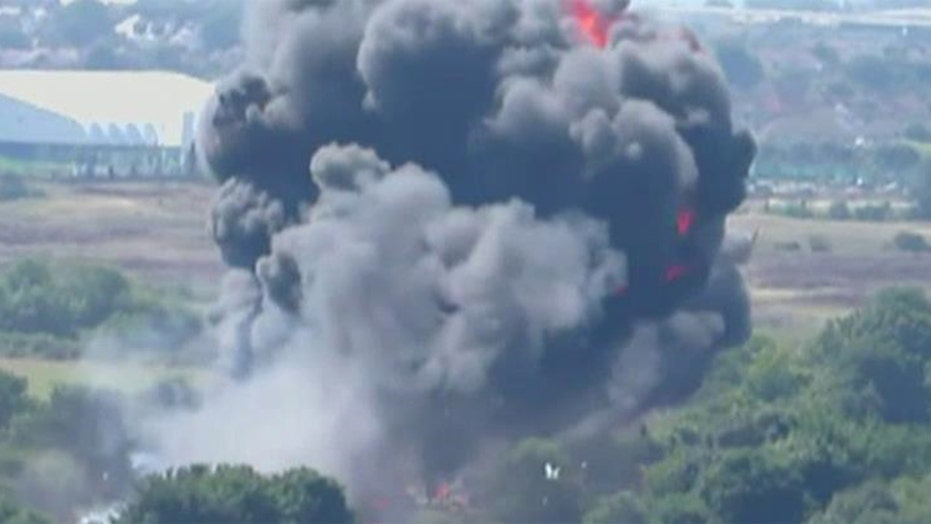 Britain's aviation regulator on Monday issued immediate restrictions on flying displays by vintage aircraft after a jet performing at an air show crashed and killed at least 11 people over the weekend, while one ranking officer said as many as 20 people could be dead.

Authorities reviewed safety procedures after a Hawker Hunter jet slammed onto a highway Saturday after it failed to pull out of a loop maneuver during the Shoreham Airshow, plowing through cars on the road and exploding in a huge fireball.

Two amateur soccer players on their way to a match were among those known to have died in the southeastern England crash. Police fear the death toll would rise as officials continued clearing the crash site.

A crane removed the jet's wreckage from the site, about 45 miles south of London, on Monday.

The Civil Aviation Authority said in a statement that flying displays by vintage jet aircraft "will be significantly restricted until further notice." Displays over land will be limited to flybys and it says "high energy" aerobatics won't be permitted.

Assistant Chief Constable Steve Barry of Sussex Police told the BBC on Monday that he'd be surprised if the number of deaths "doesn't go above" the 11 currently known, but "would be really surprised if it would be more than 20."

Police had previously confirmed that seven people had died, but noted that they were still receiving calls from relatives who had not heard from their loved ones.

Among those confirmed dead were Matthew Grimstone and Jacob Schilt, both 23, traveling together on their way to play in a soccer match. Personal trainer Matt Jones, 24, was also killed, his family said.

Grimstone’s mother questioned whether the event should have been held in a built-up area so close to the road, which is a major artery along England's south coast.

"Air shows should be over the sea," Sue Grimstone told The Daily Telegraph. "It should never have been over that road. It's such a waste."

The pilot, former Royal Air Force instructor Andrew Hill, 51, was in critical condition. Police issued a statement at the request of his family expressing their devastation and sadness for the loss of life.

"They send their prayers and heartfelt condolences to the families of all those affected at this difficult time," the statement said.

The A27 highway, which runs along the south coast, is expected to remain closed for days. Barry said the scene was devastating.

"It's about 400 yards of the dual carriageway and extends into the airfield itself," Barry said. "And there is debris and damage littered everywhere."

Authorities have been mapping and recording the scene as part of a forensic investigation.

The Daily Telegraph reported that the show was held so close to the dormitories of a boarding school that its staff insisted that the performance take place while the students were away on summer vacation.

The Civil Aviation Authority said there have been 10 fatal incidents at U.K. air shows in the last 15 years, though Saturday's incident was the first to involve anyone other than the aircrew.

Britain's deadliest air show accident was in 1952, when the engine of a supersonic de Havilland 110 plane fell into a crowd at the Farnborough Air Show in southern England, killing 29 people on the ground and two in the plane.

In 2007, a pilot at the Shoreham Airshow died after performing an unplanned maneuver in a World War II Hurricane.

The chairman of the British Air Display Association, John Turner, told the BBC that a full investigation should take place before any move is made to change the rules about where air shows take place.