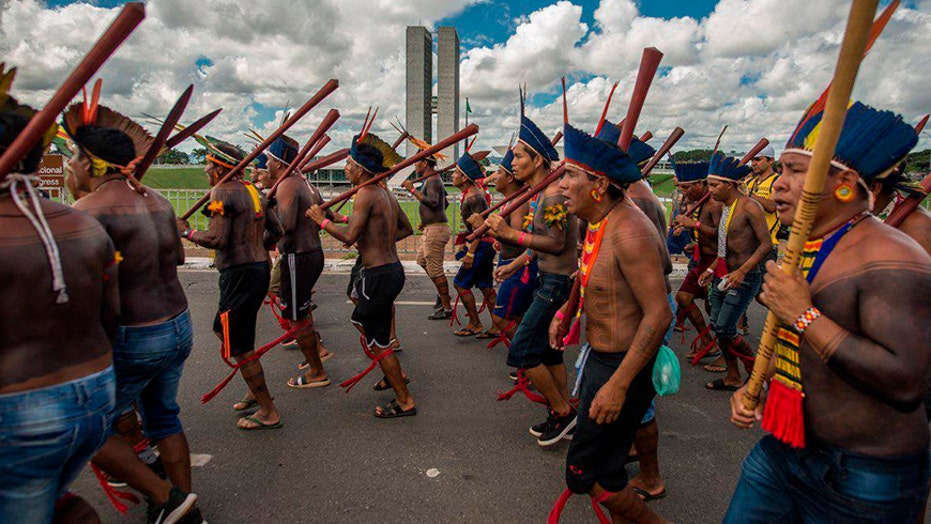 Brazil’s coronavirus numbers have skyrocketed, with a record number of cases and deaths almost every day.

On Wednesday, the country registered 32,000 new infections and more than 1,200 deaths. The total number of cases is now past 584,000, according to a tally by Johns Hopkins University, making it the second-highest hit country in the world. There have been more than 32,000 deaths, putting the country fourth in the mortality chart.

Making matters even worse, the virus is now spreading in areas with poorer health conditions, with its indigenous tribes becoming one of the most vulnerable groups.

Brazilian natives are fighting two enemies at once – the virus itself and political inaction, led by President Jair Bolsonaro, whose response to the pandemic has been widely criticized.

“There is no government structure today to aid native Brazilians that get sick,” said Roberto Liebgott, philosopher and coordinator of the Indigenous Missionary Council (CIMI). “There is also no known policies of control and isolation among those hit. It's a dire reality.”

His feeling is mirrored by natives themselves, like Maciel Xakriabá, an indigenous from the Xakriabá tribe with a nursing degree.

Indigenous from various tribes protest in Brasilia against the government policies regarding their rights. (CIMI)

"We are really afraid of mounting deaths in our community since we are more vulnerable."

Fortunately, so far his community has seen only suspect cases and instituted a heavy control on who enters native land. The nurse, however, complained about a severe lack of testing, something that has been seen throughout the country.

The special secretary of indigenous health (SESAI), linked to the Health Ministry, said so far there are 1,600 confirmed cases and 59 deaths among the indigenous population. According to the index, the area with most indigenous deaths is within the Amazon State, more specifically the High River Solimões region, with 23 deaths, almost 40 percent of the total. The Kokama tribe has been specially hit, according to Reuters.

The numbers might appear low in contrast to a rising national death count, but they do not tell the whole story. Liebgott believes there has been a massive underreporting due to the fact that many natives are not being assisted by indigenous oriented entities.

A Kokama native being examined by doctors in his tribe. (Amazônia Real)

"Many attend municipal or state-run hospitals because of proximity, were they end up entering the general numbers and not the official indigenous statistics," he explained, adding that natives who live in urban areas are also not accounted for. "There might be hundreds of indigenous deaths hidden in the general population numbers. We don't even know".

The discrepancy can be seen in the data provided by civilian interest groups like the Association of Brazilian Indigenous Tribes (APIB). A recently published report by them stated that at least 1,809 natives were infected by COVID-19, with 178 deaths — that's three times higher the numbers provided by SESAI.

According to the executive coordinator of APIB, Sonia Guajajara, what is happening can be summed up as authorized genocide.

Brazil's President Jair Bolsonaro, wearing a mask against the spread of the new coronavirus, carries a child dressed in military policeman's uniform during a protest against the Supreme Court and Brazil's National Congress, to back his open-the-economy drive amid the pandemic, in Brasilia, Brazil, Sunday, May 17, 2020.  (AP)

"It’s scary to see that the government is doing the exact opposite of what it should," she said on a podcast at UOL, a major news outlet. "But worst then that is feeling institutionalized racism being transformed in an implicit genocidal agenda".

The relation between the native population and the government, especially at the federal level, has never been worse. Under the Bolsonaro administration, contentious issues have included land demarcation, illegal mining in ancestral grounds and agribusiness expansion.

The current environment minister, Ricardo Salles, was even recently caught on tape suggesting, during a cabinet meeting on April 22, that the government should use the COVID-19 crisis to "run the cattle herd" through the Amazon and deregulate the environmental standards even further.

The problems is even more urgent in isolated tribes that chose not to get in contact with urban people and are therefore more susceptible to COVID-19 and other viruses being brought in by invaders. Bolsonaro's government, so far, has been lenient of illegal miners and loggers, pledging to open Brazil’s indigenous reserves in the Amazon and elsewhere to commercial mining, oil and gas exploration, cattle ranching and agribusiness, new hydroelectric dam projects and tourism.

According to Dom Roque Paloschi, the Archbishop of Porto Velho and director at CIMI, the main concern among indigenous tribes is simple: "Illegal miners, loggers, land grabbers and invaders do not stay in their houses during quarantine. On the contrary, they use this time of lacking inspections to continue destroying native land, fueled by the words of their own government".

Leonardo Coelho contributed to this story.