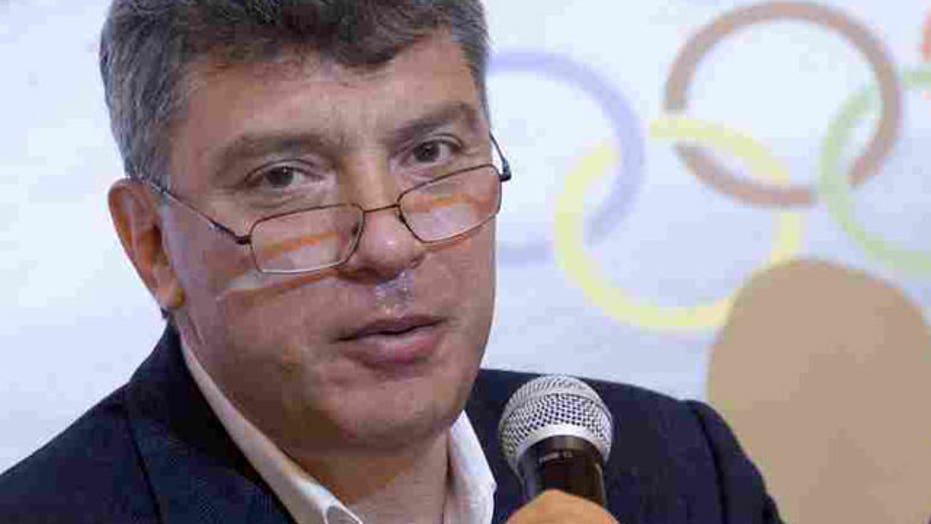 A top political nemesis of President Vladimir Putin was shot and killed early Saturday in central Moscow, Russian police said, one day before an opposition rally was scheduled to take place.

Boris Nemtsov, 55, a former deputy prime minister, was shot four times from a passing car as he was walking on a bridge just outside the Kremlin. Interior Ministry spokeswoman Yelena Alexeyeva told reporters on the scene that Nemtsov was walking with a female acquaintance, a Ukrainian citizen, when a vehicle drove up and unidentified assailants shot him dead. The woman wasn't hurt.

Putin, who quickly offered his condolences and called the murder a provocation, ordered Russia's top law enforcement chiefs to personally oversee the probe of Nemtsov's killing.

But the shooting potentially could create a political crisis in Russia, regardless of the motive or who was behind the shooting.

A sharp critic of Putin, Nemtsov assailed the government's inefficiency, rampant corruption and the Kremlin's policy on Ukraine, which has strained Russia-West ties to a degree unseen since Cold War times. The Washington Post reported that Nemtsov had angered Putin's government two years ago when he charged that billions of dollars had been stolen from funds designated for the 2014 Winter Olympics in Sochi, his hometown.

He served as a deputy prime minister in the 1990s, and once was seen as a possible successor to Boris Yeltsin, Russia's first elected president.

In condemning what he called Nemtsov's "brutal murder," President Obama urged the Russian government to conduct a "prompt, impartial and transparent investigation."

"Nemtsov was a tireless advocate for his country, seeking for his fellow Russian citizens the rights to which all people are entitled," Obama said in a statement. "I admired Nemtsov’s courageous dedication to the struggle against corruption in Russia and appreciated his willingness to share his candid views with me when we met in Moscow in 2009."

U.S. Secretary of State John Kerry said Nemtsov committed his life to a more democratic Russia, "and to strong relationships between Russia and its neighbors and partners, including the United States."

Meanwhile, in Russia and elsewhere, reaction and analysis poured in about Nemtsov and the implications of his killing.

Opposition activist Ilya Yashin said on Ekho Moskvy radio that he last spoke with Nemtsov two days before the killing. Nemtsov was working on a report presenting evidence that he believed proved Russia's direct involvement in the separatist rebellion that erupted in eastern Ukraine last year.

Ukraine and the West have accused Russia of backing the rebels there with troops and weapons. Moscow has denied the accusations, but large numbers of sophisticated heavy weapons in the rebels' possession has strained the credibility of its denials.

Yashin said he had no doubt that Nemtsov's murder was politically motivated.

"Boris Nemtsov was a stark opposition leader who criticized the most important state officials in our country, including President Vladimir Putin. As we have seen, such criticism in Russia is dangerous for one's life," he said.

Political analyst Stanislav Belkovsky told Ekho Mosvky radio station that he did not believe that Nemtsov's death would in any way serve Putin's interests.

"But the atmosphere of hatred toward alternative thinkers that has formed over the past year, since the annexation of Crimea, may have played its role," Belkovsky said, referring to the surge of intense and officially endorsed nationalist discourse increasingly prevalent in Russia since it annexed Ukraine's Crimean Peninsula.

Irina Khakamada, a prominent opposition figure who co-founded a liberal party with Nemtsov, also blamed a climate of intimidation and warned that the murder could herald a dangerous destabilization.

"It's a provocation that is clearly not in Putin's interests, it's aimed at rocking the situation," she said in remarks carried by RIA Novosti news agency.

U.S. Sen. John McCain, chairman of the Senate Armed Services Committee, said in a statement late Friday that "Boris is dead because of the environment of impunity that Vladimir Putin has created in Russia, where individuals are routinely persecuted and attacked for their beliefs, including by the Russian government, and no one is ever held responsible."

Russia's human rights commissioner, Yelena Panfilova, said "it wasn't just a shot in Nemtsov's back, it was a shot in the back of Russia."

Vladimir Ryzhkov, a longtime political ally of Nemtsov, blamed Putin for fueling "the atmosphere of hatred toward those with different views, the atmosphere of violence and aggression that now exists in the country."

He was one of the organizers of the Spring March opposition protest set for Sunday, which comes amid a severe economic downturn in Russia caused by low oil prices and Western sanctions.

Nemtsov said during a radio interview just before his death that it was hard to live under constant intimidation and pressure.

"I won't hide the fact that the opposition is under strong pressure," he said. "Lies are spread about the people, and one has to be a very strong person to cope with all this. I know this from my own experience."