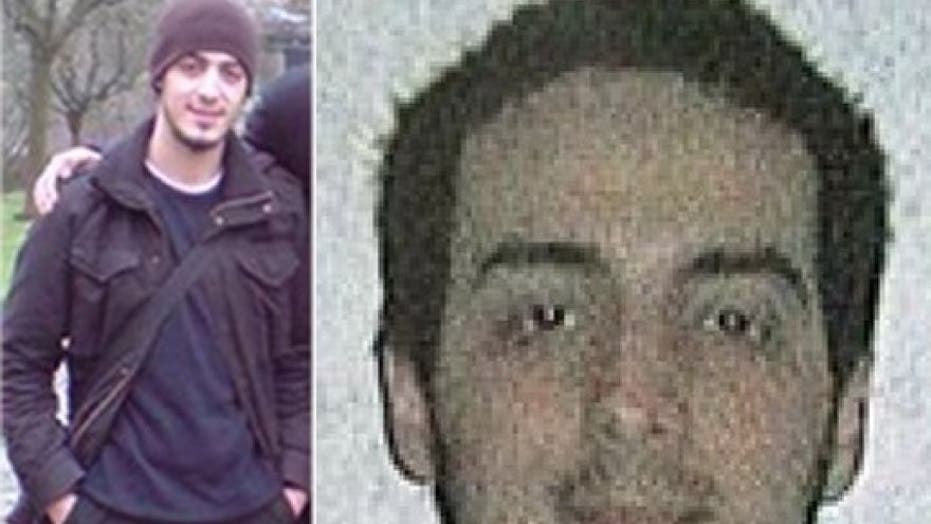 Reaction from Brian Castner, former explosive ordnance disposal technician for the U.S. Air Force and author of 'All the Ways We Kill and Die'

The shadowy terrorist believed to have made the explosives used in Tuesday's attacks in Brussels and the November massacre in Paris was one of two suicide bombers who died at Zaventem Airport, sources told Fox News.

Morrocan-born Najim Laachraoui, 24, was identified by law enforcement sources as one of two Islamic terrorists seen pushing suitcase bombs and wearing single "dead man's hand" black gloves - in a surveillance photo. The gloves are believed to have hidden detonators. A third man seen in the photo is believed to have escaped the scene and is being hunted.

Laachraoui is suspected of also making the bomb used in a blast 79 minutes later at a Brussels Metro station, as well as the explosives used to kill 130 in the the Nov. 13, 2015, attacks in Paris.

ISIS has claimed credit for Tuesday's carnage in Brussels.

The three terrorists suspected of attacking a Belgian airport on Tuesday. (Belgian Police)

The announcement came following a day of uncertainty regarding the explosives mastermind. At a midday news conference, Belgian authorities appeared not to know of his fate and he was believed to be the subject of a nationwide dragnet.

Raids on Tuesday night and Wednesday morning uncovered his suspected factory, turning up bomb-making materials in a Schaerbeek apartment, including detonators, nails and 15 kilos of acetone peroxide, a highly unstable chemical which is favored by Islamists because it's easy to make. The chemical also was found in the explosives used in the Paris attack.

Laachraoui was raised in Brussels' Schaerbeek neighborhood, a predominantly Muslim area, according to The Washington Post. He's believed to have attended a local Catholic high school where he studied electro-mechanical engineering.

Laachraoui traveled to Syria in February 2013, prosecutors said, and it was not clear when he returned to Europe.

Prosecutors have said Laachraoui played a key role in recruiting and training attackers for ISIS, according to The Wall Street Journal. He was checked by guards at the Austria-Hungary border on Sept. 9 while driving in a Mercedes with Abdeslam and one other person, Belgium's federal prosecutors said in a statement.

Using a false identity, Laachraoui also rented a house under the name of Soufiane Kayal in the Belgian town of Auvelais. That residence was allegedly used as a safe house, where prosecutors said traces of his DNA were found. That same DNA was later found on the Paris explosives. The house was searched Nov. 26.

On Monday, Van Leeuw said officials wanted to interview Laachraoui, who was "someone who must explain himself."

On Tuesday, coordinated terror attacks ripped through Brussels. Investigators reportedly believe attacks already being plotted were expedited in light of Abdeslam's arrest -- and word that he is cooperating with authorities.

Khalid is believed to have blown himself up on the Metro, an attack which killed at least 20 and injured more than 100, while Ibrahim is believed to have been the other airport bomber. The fourth bomber, the man in the far left of the airport photo pushing a cart next to Ibrahim, has not yet been identified.

The brothers were well-known to police. In a raid Tuesday at Ibrahim's address, Van Leeuw said "there was a paper where he described that he is insecure, that he is lost and he does not know what to do and he might end up in jail."

Both Ibrahim and his brother were Belgian citizens and born in Brussels, authorities said.

A March 15 raid on an apartment rented by Khalid, 27, led to Friday's arrest of Paris attack suspect Salah Abdeslam after one of Abdeslam's fingerprints was discovered in the apartment. Politico Europe, citing a senior Belgian official, reported that Abdeslam was supposed to take part in Tuesday's attacks. The report did not specify what role Abdeslam would have played.

DH reported that in October 2010, Ibrahim, 30, was convicted of shooting at police with a Kalashnikov during an attempted robbery. He was sentenced to nine years in prison. In February 2011, the paper reported, Khalid was sentenced to five years' probation in connection with a string of carjackings.

Turkey said Wednesday that Ibrahim had been detained on the Syrian border last summer, and that Ankara warned Brussels officials that he was a militant before sending him home.