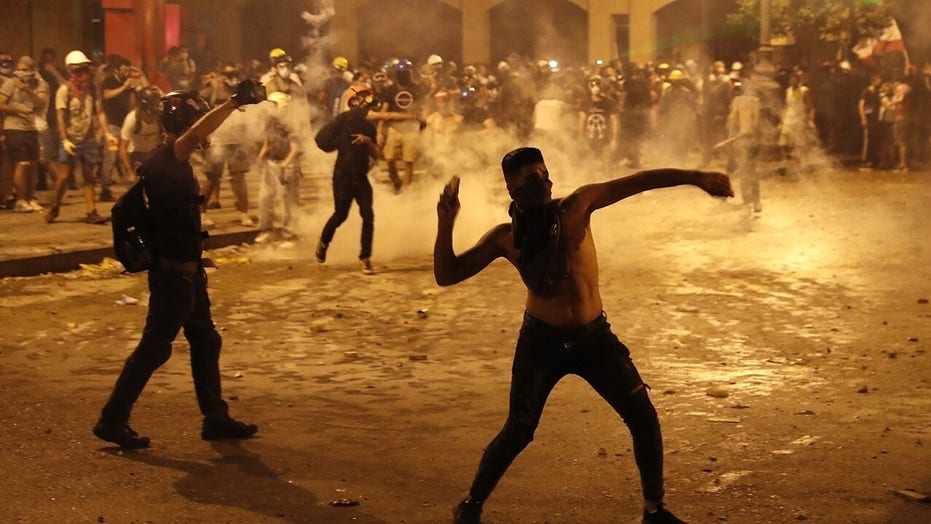 Fox News' Trey Yingst talks to protesters in the streets of Beirut who are calling for a revolution after the explosion.

He said he is taking “a step back” so he can stand with the people “and fight the battle for change alongside them.”

“I declare today the resignation of this government. May God protect Lebanon,”  Diab said, repeating the last phrase three times.

The resignations came a day after the death toll climbed to more than 200 people.

In this March. 7, 2020 file photo released by the Lebanese Government, Lebanese Prime Minister Hassan Diab, gives a speech at the Government House in Beirut, Lebanon. In a brief televised speech, Monday, Aug. 10, 2020, Diab said he is stepping down from his job in the wake of the Beirut port explosion last week that triggered public fury and mass protests. (Dalati Nohra/Lebanese Government via AP, File )

Earlier Monday, Lebanese health minister, Hamad Hassan, told reporters at the end of a Cabinet meeting that Diab would head to the presidential palace to “hand over the resignation in the name of all the ministers.”

After large, violent demonstrations were seen in Beirut over the weekend involving security forces firing tear gas at protesters, another protest was planned outside the Baabda Palace on Monday, as the Lebanese people also called for President Michel Aoun to step down, Reuters reported. It was not immediately clear if Aoun would cede to their demands.

During his farewell address Monday, Diab blamed corrupt politicians who preceded him for the “earthquake” that has hit Lebanon.

“They should have been ashamed of themselves because their corruption is what has led to this disaster that had been hidden for seven years,” he added.

Protesters blame the country's ruling class for corruption and negligence that led to the blast. On Saturday, Diab had offered to push for early elections. Meanwhile, Iran, which backs the Shiite Muslim militant group Hezbollah that's infiltrated Lebanon's government, warned world leaders not to politicize the devastation seen after the explosion in Beirut.

Rows of destroyed trucks are seen at the site of last week's explosion that hit the seaport of Beirut, Lebanon, Monday, Aug. 10, 2020. (AP Photo/Bilal Hussein)

Lebanon’s information minister, Manal Abdel Samad, was the first to quit on Sunday in the aftermath of the explosion that left some 6,000 people wounded and another 300,000 people homeless. She was followed by Lebanon’s environmental minister, Demianos Kattar, who also stepped down Sunday.

Lebanon’s justice minister, Marie-Claude Najm, became the third Cabinet member to resign within 24 hours on Monday, the state news agency reported. While trying to visit a damaged neighborhood over the weekend, she was met with shouted insults, sprayed by water hoses, and forced to leave.

Beirut Gov. Marwan Abboud said the death toll from the explosion had risen to at least 220 people as of Sunday, while another 110 people remain missing, the BBC reported.

President Trump joined an international donor call on Sunday hosted by French President Emmanuel Macron and United Nations Secretary-General Antonio Guterres. World leaders and international organizations pledged nearly $300 million in emergency humanitarian aid to Beirut in the wake of the explosion but warned that no money for rebuilding the capital would be made available until Lebanese authorities commit themselves to the political and economic reforms demanded by the people.

The massive blast on Aug. 4 has brought a new wave of public outrage at the government and Lebanon’s long-entrenched ruling class. The explosion, centered at Beirut port, is believed to have been caused by a fire that ignited a 2,750-ton stockpile of explosive ammonium nitrate. The material had been stored at the port since 2013 with few safeguards despite numerous warnings of the danger.

The result was a disaster Lebanese blame squarely on their leadership’s corruption and neglect. Losses from the blast are estimated to be between $10 billion to $15 billion.

A soldier walks past damaged vehicles, Monday, Aug. 10, 2020, in Beirut, Lebanon, near the site of last week's explosion that hit the city's seaport. (AP Photo/Bilal Hussein)

Iran meanwhile expressed concern that Western countries and their allies might exploit anger over the explosion to pursue their political interests. Iran supports the Hezbollah militant group, which along with its allies dominates Lebanon’s government and parliament.

Iranian Foreign Ministry spokesman Abbas Mousavi said “it is natural for people to be frustrated.” But he said it would be “unacceptable if some individuals, groups and foreign countries use the incident as a pretext for their purposes and intentions.”

Israel’s defense minister drew a line Monday between the blast and claims that Hezbollah stores its rockets and weapons deep inside civilian areas. While he did not accuse Hezbollah and its arms of being linked to the blast, Benny Gantz said villages and towns across Lebanon were packed with Hezbollah arms that if set off — whether by Israeli operations or by accident — would destroy homes. He said Hezbollah was Lebanon’s biggest problem.