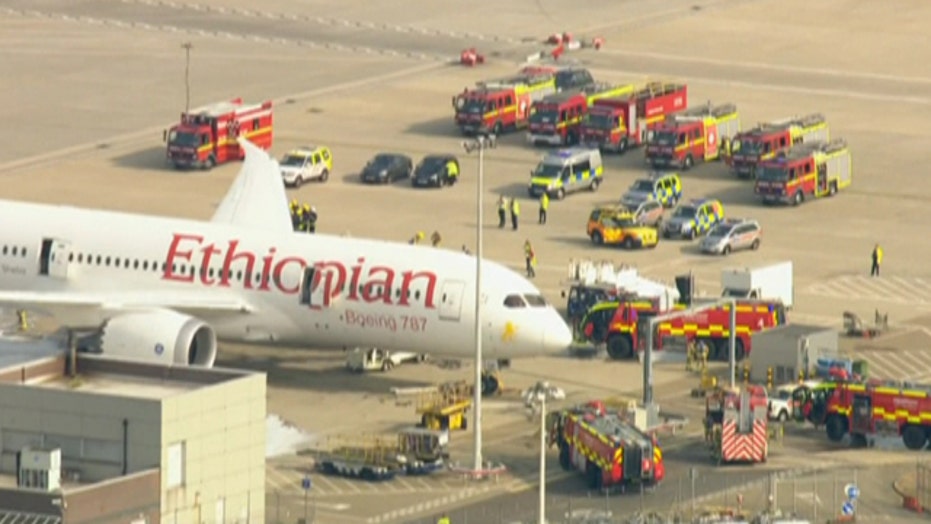 No direct link to batteries in Heathrow Dreamliner fire

LONDON (AFP) – Investigators said there was no evidence to suggest that a fire onboard a Boeing 787 Dreamliner parked at London Heathrow Airport was caused by the next-generation jet's batteries.

A team from Britain's Air Accident Investigation Branch (AAIB) was deployed following the blaze on Friday on an Ethiopian Airlines plane, which was empty at the time.

The fire is a further blow for the jet, after Boeing temporarily withdrew all Dreamliners from service earlier this year due to concerns that batteries on board could cause fires.

However, the latest incident was not down to the batteries, said the AAIB, an agency of Britain's Department of Transport ministry.

Following Saturday's first stage of its probe, the AAIB found there was "no evidence of a direct causal relationship" between the batteries and the incident at Heathrow.

"The aircraft is currently located in a hangar at London Heathrow," the it added.

"There has been extensive heat damage in the upper portion of the rear fuselage, a complex part of the aircraft, and the initial investigation is likely to take several days," it said.

"It is clear that this heat damage is remote from the area in which the aircraft main and APU (Auxiliary Power Unit) batteries are located and at this stage there is no evidence of a direct causal relationship."

Television pictures showed burn marks on the top of the plane near the back, just in front of the vertical stabiliser.

The US Federal Aviation Administration said it had also sent an official to Britain to gather facts for its own regulatory body, the US National Transportation Safety Board.

A spokesman for Ethiopian Airlines said it was investigating the incident but had no plans to ground its fleet of four 787 Dreamliners.

"The incident at Heathrow is not being treated as flight-related as the incident happened after being grounded for eight hours."

A global grounding order on the Dreamliner was issued in January after lithium-ion batteries overheated on two different jets, with one of them catching fire while the aircraft was parked.

The US aviation giant has since rolled out modifications it says will ensure the planes are safe.

Boeing's shares closed 4.7 percent lower at $101.87 in New York trading on Friday, clawing back from a dive of more than seven percent.

Heathrow, the world's busiest international passenger airport, shut down for 90 minutes following the incident, and there were still knock-on delays on Saturday.

A spokeswoman told AFP that about 40 flights had been cancelled throughout the day, largely due to aircraft being out of place, but said delays to other flights were "minimal".

In a separate incident on Friday, a Dreamliner flying from Manchester in northwest England to Florida was forced to turn back after experiencing a "technical issue" after take-off.

It was operated by Thomson Airways, which only three days earlier had become the first British airline to fly the plane.

The Dreamliner should have entered passenger service in 2008 but it was not until October 2011 that the first commercial flight was operated by Japanese carrier All Nippon Airways.

It has been marketed as a quiet, fuel-efficient aircraft carrying between 201 and 290 passengers on medium-range routes.