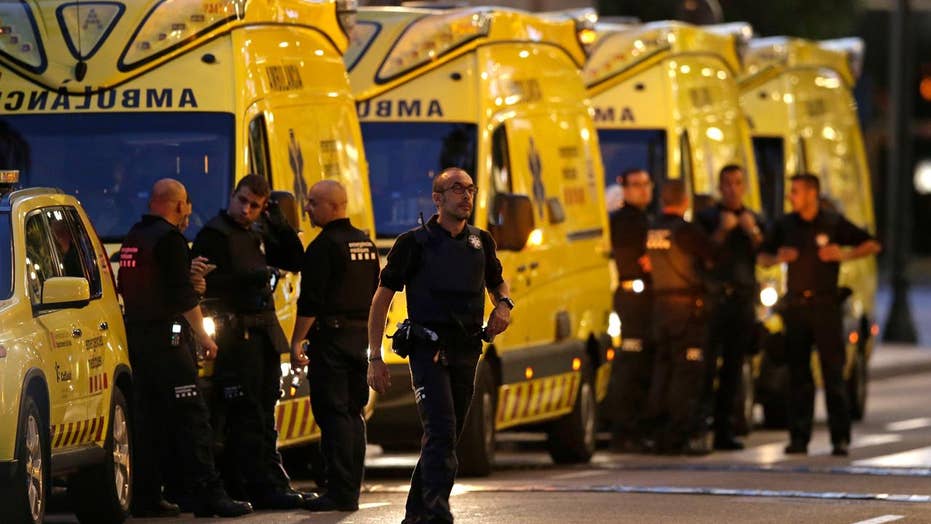 Benjamin Hall reports on the investigation

In a chilling new video, the terrorist who plowed into pedestrians on a busy Barcelona city street is seen calmly walking away from the scene of the attack -- even speaking to a woman who asks him about the cause of the commotion.

Younes Abouyaaquob, who killed 13 people in the vehicle-ramming incident at Las Ramblas, appears to have been filmed by a terrified Spanish woman amid the chaos on Aug 17.

The video was first posted by Spanish TV network, Antena 3.

As she passes the 22-year-old Abouyaaquob, who is seen calmly fleeing the scene on foot, the woman can be heard asking: “Do you know what happened?”

The Moroccan-born Abouyaaqoub, sporting a striped shirt and dark jeans, responds in Spanish: “I don’t know what’s happening over there.”

Younes Abouyaaquoub, 22, drove a van during a terror rampage in Barcelona. (AP)

He points behind him and appears to be wearing sunglasses.

Just minutes before the frantic video was filmed, Abouyaaquob had driven a van into the crowded Las Ramblas, a popular tourist center in Barcelona. He injured more than 100 people in the ISIS-claimed attack.

After he left the scene, Abouyaaqoub carjacked Spaniard Pau Perez, 35, fatally stabbing the man and stealing his Ford Focus.

Authorities said Abouyaaqoub was part of a 12-man terror cell that unleashed another attack hours after the Ramblas attack in the nearby seaside town of Cambrils. Five members of the gang plowed into pedestrians before going on a rampage with an ax and large knives, stabbing one person to death.

The five terrorists were shot by police.

Abouyaaqoub was killed by police on Aug. 21 about 30 miles west of Barcelona after an extensive manhunt.