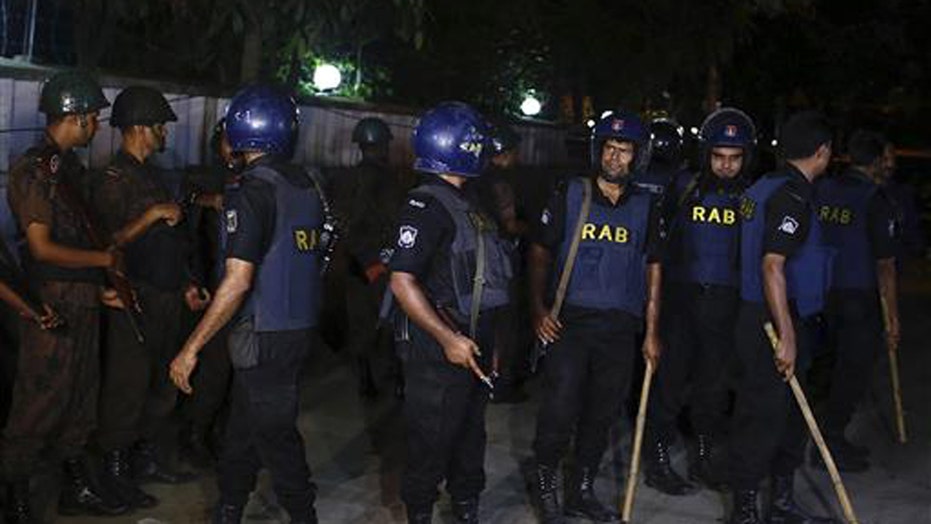 What does Bangladesh terror mean for the fight against ISIS

Islamic extremists in Bangladesh hurled homemade bombs and engaged in a gunbattle with police guarding a large Eid prayer service at the end of the holy Muslim month Thursday morning. Two officers, a woman and one suspected militant were killed, while at least 12 other people were injured, officials said.

At least one of the bombs exploded during the prayer attended by hundreds of thousands of people at the sprawling Sholakia grounds in the district of Kishoreganj, about 90 kilometers (60 miles) north of the capital of Dhaka. The grounds hold the country's largest open-air gatherings for the Muslim holiday of Eid-al-Fitr, marking the end of the fasting month of Ramadan.

After the blast killed two officers, police fired on the attackers and killed one of them, Assistant Superintendent Tofazzal Hossain said. A female bystander was also killed in the crossfire. More than a dozen other people were injured with gunshot or bomb shrapnel wounds, including two in critical condition, he said.

Police cordoned off the area and searched the devotees as well as nearby houses for suspects in hiding, said resident Shafiqul Islam, who was among those offering Eid prayers.

The violence comes just days after a deadly hostage crisis in which 28 people were killed, including 20 hostages, two police and six of the attackers. Most of the hostages slain during the Friday night attack on a Dhaka restaurant were foreign -- from Italy, Japan and India -- raising international concerns about escalating extremist violence in Bangladesh.

The ongoing spate of attacks begun in 2013 has generally targeted atheists, religious minorities and others considered by militants to be "enemies of Islam."

There was no immediate claim of responsibility for Thursday's attack, but the government insisted it was carried out by domestic militants fighting to destabilize Prime Minister Sheikh Hasina's secular government and establish Islamic rule in the Muslim-majority nation.

The country's information minister said the target of the attack was the police convoy patrolling the religious gathering.

"It is a totally political move. They are out to destabilize the government. It is a political attack to oust and topple the secular government of Sheikh Hasina," Minister Hasanul Haq Inu told Indian broadcaster CNN-News 18.

Though many past attacks, including the hostage-taking, have been claimed by the Islamic State group, Hasina's government has dismissed those claims as opportunistic, and says none of the attacks have been orchestrated from abroad.

Instead, Hasina's government has accused her political opponents of backing the militant agenda in Bangladesh, an allegation the opposition parties vehemently deny.

On Wednesday, the extremist Sunni Muslim group released a video warning of more attacks in Bangladesh, according to the SITE Intelligence Group, which monitors jihadi activity online.

Many Bangladeshis have said they were horrified by the attacks, but determined to stand against them.

"The rise of such a minuscule militancy can be rooted out very soon," said Dhaka resident Mohammad Nizam Uddin Jitu. after participating in Eid prayers on Thursday at the Baitul Mukarram National Mosque in the capital.