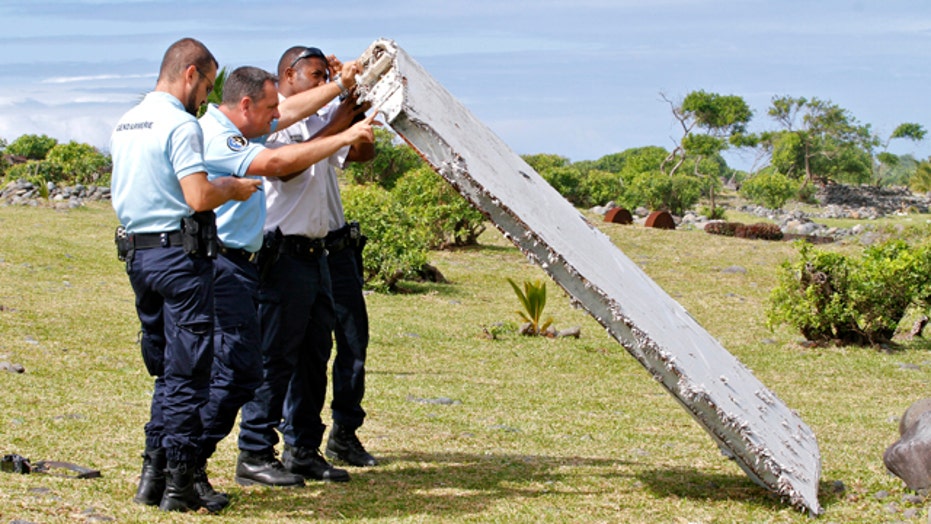 Australian officials investigating the disappearance of Malaysia Airlines Flight 370 said Thursday that the discovery of debris on the Indian Ocean island of Reunion was "a major lead", but warned it was "too early" to say whether it belonged to the missing Boeing 777.

"It's the first real evidence that there is a possibility that a part of the aircraft may have been found," Australian Transport Minister Warren Truss told reporters Thursday. "It's too early to make that judgment, but clearly we are treating this as a major lead."

Malaysia's prime minister said the debris will be sent for investigation to the French city of Toulouse, the center for European aviation.

"We have had many false alarms before, but for the sake of the families who have lost loved ones, and suffered such heartbreaking uncertainty, I pray that we will find out the truth so that they may have closure and peace," Najib Razak said on his personal blog. He promised to make any new information public quickly.

An unconfirmed photo has also emerged of a man holding what appeared to be remains of a luggage bag that was believed to have been found near the plane debris, but so far there is no link to MH370.

"The piece of suitcase was here yesterday but no one really paid any attention to it," Johnny Begue, a cleaning member, told Le Parisien. "You can see how a zip from the suitcase is still attached to a piece of rigid fabric — it's just surreal, it makes me shudder."

Air safety investigators -- one of them a Boeing investigator -- have identified the component found as a "flaperon" from the trailing edge of a Boeing 777 wing, a U.S. official told the Associated Press. Flight 370, which disappeared March 8, 2014, with 239 people on board, is the only 777 known to be missing.

The barnacle-encrusted wing piece is about 6 feet long. Investigators have found a number on the part, but it is not a serial or registration number, Truss said. It could be a maintenance number, which may help investigators figure out what plane it belongs to, he said.

A French official close to an investigation of the debris confirmed Wednesday that French law enforcement is on Reunion to examine it. A French television network was airing video from its Reunion affiliate of the debris. U.S. investigators are also examining a photo of the debris.

"You can see how a zip from the suitcase is still attached to a piece of rigid fabric — it's just surreal, it makes me shudder"

— Johnny Begue, a member of the cleaning crew, told a French paper

The U.S. and French officials spoke on condition that they not be named because they aren't authorized to speak publicly.

Flaperons are located on the rear edge of both wings, about midway between the fuselage and the tips. When the plane is banking, the flaperon on one wing tilts up and the other tilts down, which makes the plane roll to the left or right as it turns.

July 29: French gendarmes and police inspect a large piece of plane debris which was found on the beach in Saint-Andre, on the French Indian Ocean island of La Reunion. (Reuters)

The piece could help investigators figure out how the plane crashed, but whether it will help search crews pinpoint the rest of the wreckage is unclear, given the complexity of the currents in the southern Indian Ocean and the time that has elapsed since the plane disappeared.

A massive multinational search effort of the southern Indian Ocean, the China Sea and the Gulf of Thailand has turned up no trace of the plane.

The last primary radar contact with Flight 370 placed its position over the Andaman Sea about 230 miles northwest of the Malaysian city of Penang. Reunion is about 3,500 miles southwest of Penang, and about 2,600 miles west of the current search area.

It was well understood after the aircraft disappeared that if there was any floating debris from the plane, Indian Ocean currents would eventually bring it to the east coast of Africa, said aviation safety expert John Goglia, a former member of the U.S. National Transportation Safety Board. But the debris is unlikely to provide much help in tracing the ocean currents back to the location of the main wreckage, he said.

"It's going to be hard to say with any certainty where the source of this was," he said. "It just confirms that the airplane is in the water and hasn't been hijacked to some remote place and is waiting to be used for some other purpose.  ... We haven't lost any 777s anywhere else."

The discovery is unlikely to alter the seabed search, said Australian Transport Safety Bureau Chief Commissioner Martin Dolan, who is heading up the hunt. If the find proved to be part of the missing aircraft, it would be consistent with the theory that the plane crashed within the 46,000-square-mile search area, 1,100 miles southwest of Australia, he said.

Dolan said search resources would be better spent continuing the seabed search with sonar and video for wreckage rather than reviving a surface search for debris if the part proved to be from Flight 370.

If the part belongs to Flight 370, it could provide valuable clues to investigators trying to figure out what caused the aircraft to vanish in the first place, said Jason Middleton, an aviation professor at the University of New South Wales in Sydney. The nature of the damage to the debris could help indicate whether the plane broke up in the air or when it hit the water, and how violently it did so, he said.

The barnacles attached to the part could also help marine biologists determine roughly how long it has been in the water, he said.

Investigators hope that if they can locate the two recorders they can get to the bottom of what has become one of aviation's biggest mysteries. The unsuccessful search for Flight 370 has raised concern worldwide about whether airliners should be required to transmit their locations continually via satellite, especially when flying long distances over the ocean.

Over the past 16 months, hopes have repeatedly been raised and then dashed that the plane, or parts of the plane, had been found: Objects spotted on satellite imagery, items found floating in the sea and washed ashore in Western Australia, oil slicks -- in the end, none of them were from Flight 370.

The most infamous false lead came in April 2014, when Australian Prime Minister Tony Abbott said officials were "very confident" that a series of underwater signals search crews had picked up were coming from Flight 370's black boxes. The signals proved to be a dead end, with no trace of the devices or the wreckage found.