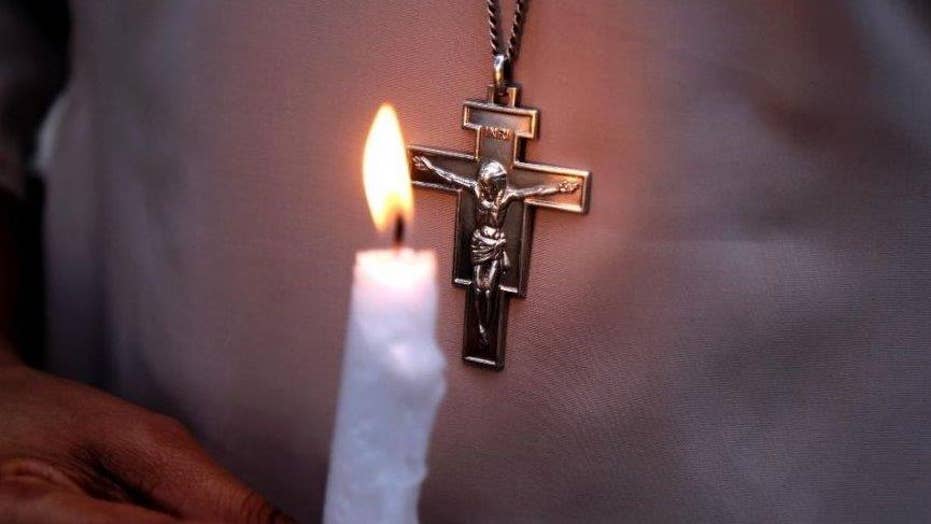 The murder Tuesday of an elderly priest inside a church in France during Mass shocked and sickened the West, but Christians in Africa have long known there is no sanctuary from radical Islamic terrorism.

In 2015, more than 2,000 Christian churches in Africa were attacked by terrorists, and more than 7,000 Christians were killed, according to the advocacy group Open Doors USA. Those figures show terrorist groups like ISIS, which claimed credit for Tuesday's attack, as well as Al Shabaab and Boko Haram, will not hesitate to kill inside a house of worship.

"News of the murdered priest in Normandy has shaken many to the core,” David Curry, president and CEO of Christian Watchdog group Open Doors USA told FoxNews.com. “While in Nigeria, an average of five churches are attacked every Sunday, this is the first documented case of Western Christians being attacked by ISIS during a worship service."

This church in Damasak, Nigeria, was destroyed by Muslim terrorists in March of last year. (Reuters)

Geography aside, the incident bore similarities to hundreds of attacks that have occurred in Africa, where in 2015 alone more than 2,400 Christian churches were struck by terrorists.

Nigeria has been hardest hit, due to the ruthless brutality of militant Islamist group Boko Haram. Huge numbers of the country's Christian churches have been destroyed.

“Seventy percent of our churches have been destroyed in Adamawa, Yobe and Borno states by Boko Haram,” the Rev. Samuel Dali, a Nigerian pastor and president of the Church of the Brethren said last August, according to ChristianPost.com. “Over 8,000 of our members were killed."

Among the more devastating attacks inside Christian churches in Africa last year:

This year will prove to be a lot worse for the Central African nation, according to Open Doors USA, which estimates murders of Christians are up more than 60 percent.

The torched remains of a Baptist Church are seen in Mabass, northern Cameroon near the Nigerian border. (Reuters)

As far back as 2012, 18 people were killed during twin church attacks in Kenya and dozens more severely injured. In those attacks, the militants entered the Africa Inland Church (AIC) and the Catholic Church, shooting at worshippers with firearms and detonating grenades. Churchgoers tried to flee, but were shot dead as they attempted to escape at both locations.

Curry said Sunday’s attack in France, if anything, underscores the need to address the long-standing issue of extreme hostility against Christians worldwide.

“Now more than ever, our leaders, and particularly the presidential candidates, must outline a plan for addressing the global persecution of Christians," he said.