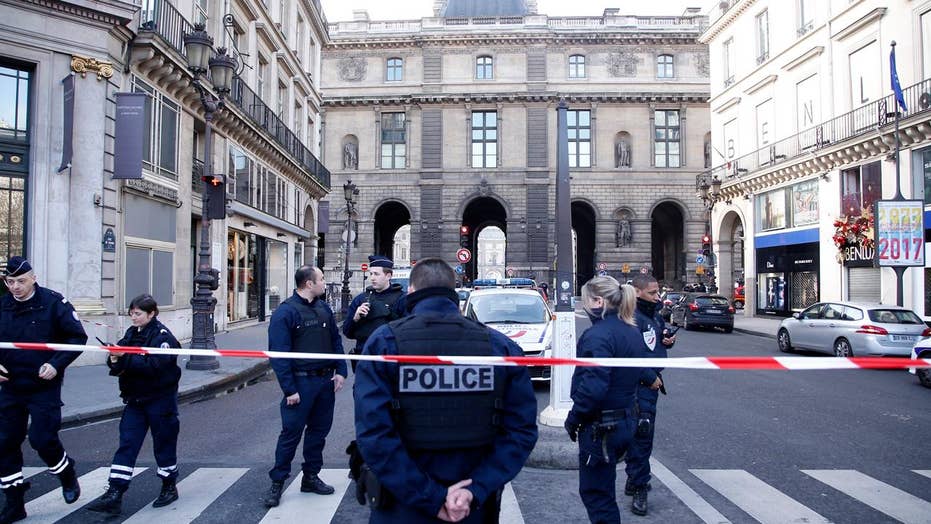 A machete-wielding man shouting "Allahu akbar" three times attacked four French soldiers Friday inside a shopping mall beneath the Louvre Museum in Paris before one soldier shot him, investigators said.

VOLUNTEER FIGHTER REPORTEDLY KILLED HIMSELF SO ISIS COULDN'T CAPTURE HIM

French President Francois Hollande said it was "no doubt" an act of terror. One of the soldiers suffered minor injuries, and the attacker -- shot five times in the stomach -- was seriously wounded. A military spokesman said the soldiers tried to fight him off before opening fire.

Prosecutor Francois Molins said the attacker came to Paris on a tourist visa on Jan. 26 and bought two military machetes at a gun store in the city two days later.

Hours later, police launched several raids across the city, two French officials close to the investigation told The Associated Press without giving any precise locations. A police union official, Luc Poignant, said one of the raids took place on Rue de Ponthieu, a street near the Champs-Elysees Avenue, the city's famed boulevard. It was unclear how closely the raids were related to the attack near the Louvre.

The soldier who was slightly injured was not the one who shot the attacker, according to authorities. The museum went on lockdown for hours.

The attacker had two machetes and was carrying two backpacks -- but there was no sign the bags held explosives, a police union official said. He told reporters the man launched himself at the soldiers when they told him that he couldn't bring his bags into the Carrousel du Louvre shopping mall underneath the world-famous museum where the "Mona Lisa" hangs.

"That's when he got the knife out and that's when he tried to stab the soldier," said the official, Yves Lefebvre.

The four soldiers first tried to fight off the attacker before opening fire, said Benoit Brulon, a spokesman for the military force that patrols Paris and its major tourist attractions. President Francois Hollande praised the troops' "courage and determination."

Anti-terrorism prosecutors took charge of the investigation. There were no immediate details about the identity of the attacker. "Allahu akbar" is the Arabic phrase for "God is great."

It was believed the man acted alone. Cadot said a second person who was "acting suspiciously" also was arrested, but may not have been involved.

The museum in the center of Paris is one of the French capital's biggest tourist destinations, attracting more than 9 million people each year.

Over the last two years, France has beefed up its security measures in the wake of terror attacks that shocked the nation in the capital and the southern city of Nice.

The military patrols — numbering about 3,500 soldiers in the Paris area — were instituted following the January 2015 murders at the satirical magazine Charlie Hebdo and a kosher supermarket and reinforced after the November 2015 suicide bomb and gun attacks that left 130 people dead at the city's Bataclan concert hall and other sites.

Seven months later, in the southern city of Nice, Mohamed Lahouaiej Bouhlel plowed a 19-ton truck into a mile-long crowd of revelers during Bastille Day festivities. At least 84 people were killed.

Bouhlel, a 31-year-old petty criminal of Tunisian nationality, was killed by police.

About 1,000 people were inside the Louvre museum and were kept in safe areas immediately after Friday's attack, Interior Ministry spokesman Pierre-Henry Brandet said. The museum was set to reopen Saturday.

"We are dealing with an attack from an individual who was clearly aggressive and represented a direct threat, and whose comments lead us to believe that he wished to carry out a terrorist incident," Cadot said.

Olivier Majewski was just leaving his scooter in the parking lot beneath the Louvre when he saw a crush of people, 30 or 40, running and screaming "there's been a terror attack." The 53-year-old said he hid for about 15 minutes before gingerly making his way upstairs. He said people were clearly scared.

"They were panicked," he said.

The attack's timing was poor for Paris, coming just hours before the city was unveiling its completed bid for the 2024 Olympics. Paris is competing against Budapest and Los Angeles for the games, which it hasn't hosted since 1924. With the International Olympic Committee choosing the host in September, Friday's attack generated renewed questions about security in the City of Light.

Speaking outside the Louvre, Paris Mayor Anne Hidalgo said terrorism threatens all of the world's big cities and "there is not a single one escaping that menace."