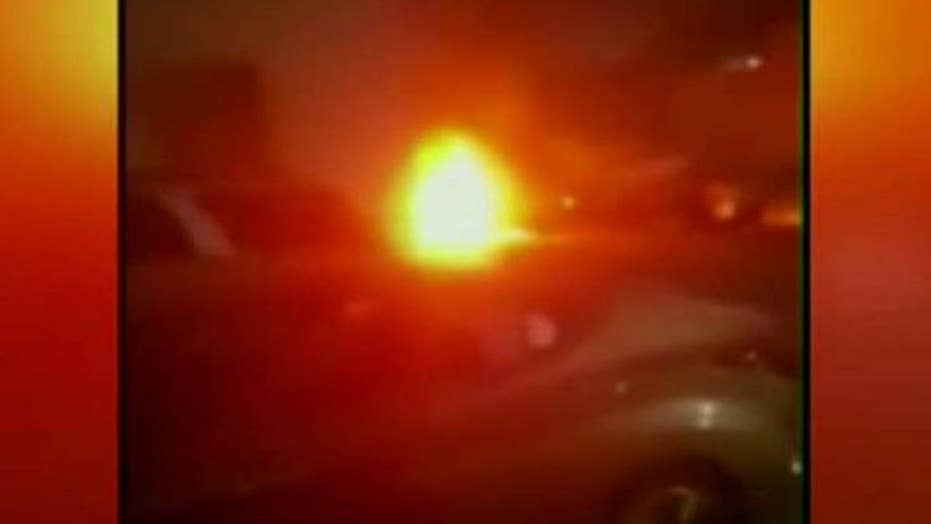 At least four security officers were killed and five injured in a suicide bombing Monday outside an Islamic holy site in Medina, according to the Saudi Interior Ministry.

The Monday evening attack took place just as thousands of worshippers were about to hold sunset prayers in the mosque where the Prophet Muhammad is buried in Medina.

The mosque is visited by millions of Muslims from around the world annually performing pilgrimage in Mecca.

The ministry statement, carried Monday on the state-run al-Ekhbariya news channel, said the attacker set off the bomb after security officers raised suspicions about him. The attack took place in a parking lot outside the sprawling mosque complex.

The bombing happened the same day that two suicide bombers struck different cities in Saudi Arabia, one of them near a U.S. consulate. No group has yet claimed responsibility for any of the attacks.

Qari Ziyaad Patel, 36, from Johannesburg, South Africa, was at the mosque when he heard a blast just as the call to sunset prayers was ending. People were breaking their fast with dates so the mood was subdued, he said. Many at first thought it was the sound of traditional, celebratory cannon fire, but then he felt the ground shake.

"The vibrations were very strong," he said. "It sounded like a building imploded."

The sprawling mosque where the Prophet Muhammad is buried is visited by millions of Muslims from around the world each year during pilgrimages to Mecca. The area would have been teeming with pilgrims for prayer during the final days of the Muslim holy month of Ramadan, which ends this week.

Earlier Monday, a suicide bomber carried out an attack near a U.S. diplomatic site in the western Saudi city of Jiddah wounding two security guards, according to the Interior Ministry. Also, a resident in the largely Shiite eastern Saudi region of Qatif said a suicide bomber and a car bomb struck a neighborhood there, but that no injuries were immediately reported.

Mohammed al-Nimr told The Associated Press the bomber in Qatif detonated his suicide vest Monday evening when most residents of the neighborhood were at home breaking the Ramadan fast.

Qatif is heavily populated by Shiites, who are a minority in the Sunni-ruled kingdom. Al-Nimr says that near the body of a suicide bomber was a car bomb that also went off around the same time.

The attacks struck next to a Shiite mosque. The Islamic State group has in the past attacked Shiite places of worship in Qatif.

Egypt, the United Arab Emirates and Bahrain have condemned the blasts in Saudi Arabia.

Egypt's Foreign Ministry said the reported attack during the Muslim holy month of Ramadan near one of Islam's most sacred places confirms that terrorism "knows no religion or belief or any meaning of humanity."

A Foreign Ministry official in the UAE was quoted in the state-run WAM news agency as saying the stability of Saudi Arabia "is the main pillar of the stability of the United Arab Emirates and the whole of the Gulf Arab region."

The secretary general of the 57-nation Organization of Islamic Cooperation, which is headquartered inSaudi Arabia, says the attacks are an attempt to destabilize the kingdom. Iyad Madani says the kingdom's security is "the cornerstone of security and stability in the region and the Islamic world."