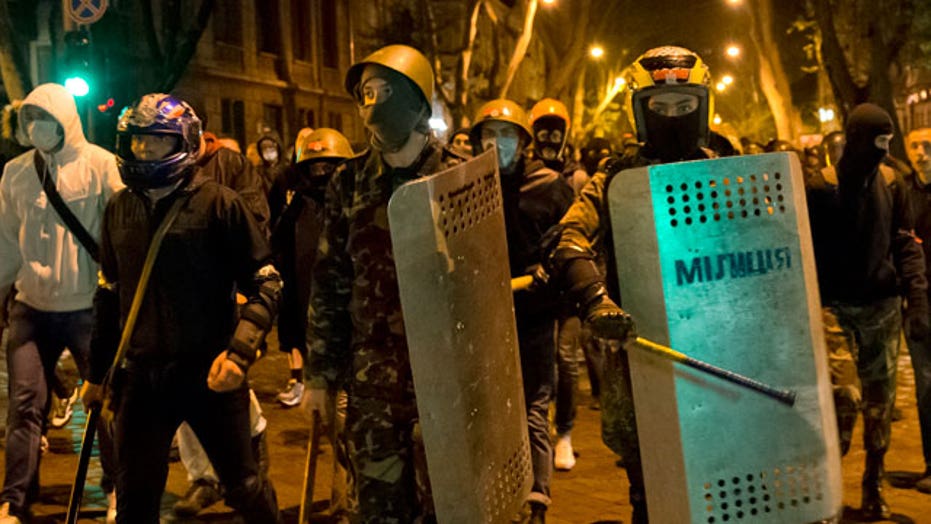 Ukrainian forces were entrenched in deadly gun battles Monday against pro-Russian fighters in the eastern town of Slovyansk, and the government sent an elite national guard unit to the southern port city of Odessa, in the latest attempt to restore Kiev's control over the increasingly unstable region.

In Slovyansk, witnesses heard gunfire and several explosions as government troops faced off against some 800 pro-Russian insurgents, the Associated Press reported. The rebels are armed with large-caliber weapons and mortars.

Violence in several areas around the city caused injuries on both sides. A pro-Russia militia spokesman in Slovyansk said an unspecified number of people had been killed and wounded in the clashes, including a 20-year-old woman killed by a stray bullet. Ukraine's interim interior minister, Arsen Avakhov reported four officers were killed and 30 were wounded in the fighting.

An Mi-24 Ukrainian helicopter under heavy machine gun fire was shot down over Slavyansk and crashed into a river Monday, Sky News reported. The Ukrainian defense ministry said the two pilots survived the crash and fled to a nearby camp, but their conditions were unknown.

Pro-Russian rebels have shot down at least three other helicopters in the last week in eastern Ukraine.

Sky News reporter Stuart Ramsay-- who saw the chopper come down—said it was picking up soldiers at the time of the crash. "The fighting was very intense this morning. It was described as an ambush but we understand it was part of the Ukraine government's attempts to take out a ring of checkpoints," Ramsay said.

Earlier Monday, the BBC, citing the Russian Interfax news agency, reported that government forces had taken control of a TV tower and forced the insurgents to retreat deeper inside Slovyansk. Reuters reported that heavy gunfire could be heard closer to the center of town than in recent days, while at least two armored vehicles controlled by separatists were seen retreating.

The fresh fighting comes one day after army troops cut off the main road into Slovyansk as part of what the government has described as "anti-terror" operations meant to retake government buildings captured by insurgents in the wake of Russia's annexation of Crimea in March.

Ukraine’s ongoing crisis has polarized the nation of 46 million. Some citizens in western regions want to create closer ties to Europe and the West, while other Russian speakers in the east want to remain with Russia.

In recent weeks, anti-government forces have stormed and seized government buildings and police stations in a dozen eastern Ukrainian cities.  Authorities in Kiev -- who blame Russia for backing the insurgents -- have up to now been largely powerless to react. And since Russia has kept tens of thousands of troops along Ukraine's eastern border -- and annexed its key Black Sea peninsula of Crimea last month -- Ukraine's central government fears Russia could try to invade and grab more territory.

Popular opinion has apparently been galvanized against the interim government by Friday's violence in the Black Sea port of Odessa, in which at least 46 people were killed. Most of the dead were pro-Russia activists who barricaded themselves in the city's trade union building, which was set on fire by pro-Kiev demonstrators outside.

The actions of the security force in Odessa drew condemnation from Ukraine interim Prime Minister Arseniy Yatsenyuk, who vowed that he would order an independent investigation into the conduct of the police. However, a BBC reporter who spoke to residents of the towns around Slovyansk said that she had been told that what happened in Odessa "cannot be forgiven."

Events threatened to further spiral out of the Kiev government's control Sunday, when pro-Russia protesters attacked the main police station in Odessa and freed 67 people who had been arrested in relation to Friday's violence. Late Sunday, thousands of pro-Ukraine protesters marched through the city to the regional police headquarters and the trade union building, singing Ukraine's national anthem.

The Interior Ministry said in a statement Monday that it was sending an elite national guard unit from Kiev to re-establish control in the city, and said 42 of those arrested during the rioting were being sent to another region for investigation.

Russia, which the international community has accused of promoting the unrest, has vociferously condemned Ukraine's recent security operations in the east.

In another sign of how fraught the situation has become, Reuters reported Monday that Ukraine's largest bank, Privatbank, had temporarily closed branches in the eastern cities of Donetsk and Luhansk.

"In the current circumstances we cannot and do not have the right to make people go to work in the Donetsk and Luhansk regions, where armed people break into bank branches and seize security vans in the towns,'' Privatbank said in a statement obtained by Reuters. The bank's co-owner, Igor Kolomoisky, reportedly enraged pro-Russian fighters by reportedly pledging gifts of $10,000 per "saboteur" arrested by Ukrainian troops.

Also late Sunday, German Foreign Minister Frank-Walter Steinmeier began a push to hold a second round of talks in Geneva in the hope of stopping the violence.

Steinmeier told Germany's ARD television late Sunday all parties must push for a return to the accord reached in Switzerland last month encouraging all sides to lay down arms.

Steinmeier said new talks are needed in the wake of recent violence to produce a "clear conclusion as to how this conflict can be brought to a halt."

He said he has been pushing for the meeting with Russian Foreign Minister Sergey Lavrov, U.S. Secretary of State John Kerry, the European Union and the Organization for Security and Cooperation in Europe.