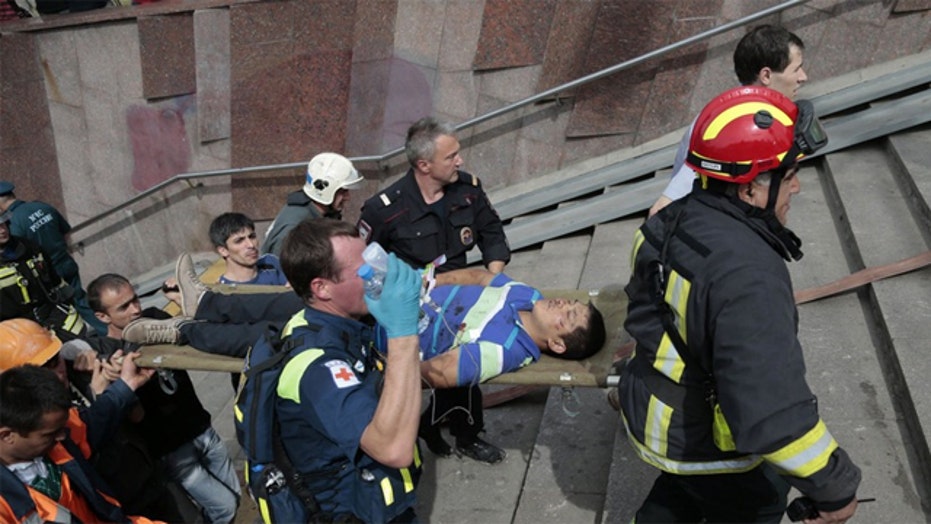 At least 21 people were killed Tuesday when a Moscow subway train derailed during the morning rush hour, sending 136 others to the hospital.

Of the 136 people hospitalized, at least 42 were in grave condition Tuesday evening, health officials said.

By late afternoon, rescuers had recovered seven bodies and were working to extract 12 more trapped in two wrecked train cars at the Park Pobedy station, said Alexander Gavrilov, deputy chief of Moscow's emergency services. One woman taken from the scene died at a Moscow hospital.

One citizen of China and one citizen of Tajikistan were among those killed, Russian news agencies quoted city officials as saying.

Over 1,100 people were evacuated from the train, which was stuck between two stations, in a rescue operation that ended more than 12 hours after the accident.

In video released by the Emergency Situations Ministry, several wrecked train cars looked almost coiled, occupying the entire width of the tunnel. Workers were trying to force open the mangled doors of one car to retrieve bodies. Photos posted on social media sites showed passengers walking along the tracks in the dimly lit tunnel.

Paramedics carried one woman covered with a blanket to the lawn by the famous Triumphal Arch and put her on a medical helicopter, one of four seen taking off from the park.

In the scorching summer weather authorities provided drinking water to survivors, some of whom were sitting near the station's entrance in a state of a shock.

Several cars left the track after a power surge triggered an emergency alarm, which caused the train to come to an abrupt stop in the western part of the Russian capital.

Mayor Sergei Sobyanin told reporters that unnamed officials will not only be fired but also charged with crimes, though he would not say what charges they might face.

Prime Minister Dmitry Medvedev offered his condolences for the victims and their families.

Moscow's transit system has been previously targeted by terrorists but this time Russian officials have vehemently dismissed terrorism as a possible cause.

Vladimir Markin, spokesman for the Investigative Committee, said in a televised briefing that investigators were considering a fault in the train cars among the possible causes.

A man with a bloody cut on his brow told Rossiya 24 television outside the Park Pobedy station that he felt a jolt and the train abruptly came to a halt. "There was smoke and we were trapped inside," the man said. "It's a miracle we got out. I thought it was the end.

At 275 feet below street level, Park Pobedy is the deepest metro station in Moscow, which is making the rescue particularly hard.

The Moscow Metro is one of the most famous subway systems in the world, known for its palatial interiors with mosaics, chandeliers and marble benches. The station serves the vast Park Pobedy, where the World War II museum is located and which is close to Moscow's triumphal arch.