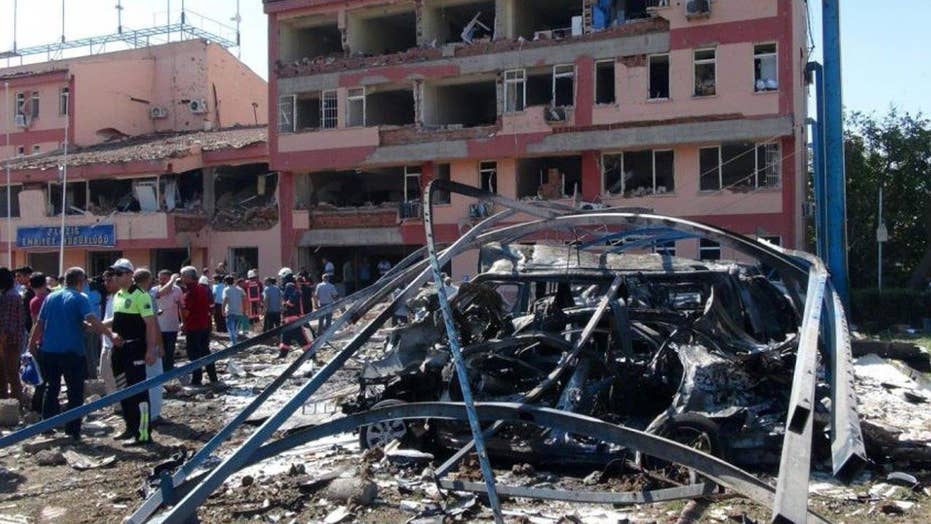 Two of the attacks were car bombings that hit police stations in eastern Turkey, while a third — a roadside blast — targeted a military vehicle carrying soldiers in the southeast of the country.

The wave of attacks come as Turkey is focused on a clampdown on suspected followers of a movement led by U.S.-based Muslim cleric Fethullah Gulen, which the government accuses of orchestrating a failed military coup last month, that killed at least 270 people.

The first car bombing hit a police station in the eastern province of Van late Wednesday, killing a police officer and two civilians. At least 73 other people — 53 civilians and 20 police officers — were wounded, officials said.

Video footage showed a large plume of smoke rising from the area. Cars were overturned and the windows of the four-story building and its wings were blown out.

In the southeastern province of Bitlis meanwhile, five soldiers were killed after rebels detonated a roadside improvised explosive device as an armored military vehicle was passing by, officials said. Five other soldiers were wounded in the attack. A government-paid village guard, helping the security forces battle the PKK was also killed in a clash with rebels in the province, the state-run Anadolu Agency reported.

Prime Minister Binali Yildirim traveled to Elazig to visit the site of the bombing as well as those wounded in the attack.

He told reporters there that both the PKK and the Gulen movement were directed by the same "intelligence" intent on causing Turkey harm, without elaborating.

"The (Gulen movement) has lost its assertiveness and has handed over the duty to the (PKK)," Yildirim said. "The intelligence that directs them is the same. When one's duty ends, the other takes up the duty."

Yildirim vowed to fight the PKK until it is "eliminated."

"No terror organization will force this nation to cow in submission," Yildirim said.

Speaking in Ankara, Erdogan said Turkey was jointly attacked by various organizations who he said were in close contact with each other and were "acting under the same motivations even if they have different names."

He said the Turkish security forces have killed at least 182 Kurdish rebels in the weeks following the July 15 failed military coup, insisting that there has been no slackening in the fight against the PKK.

Fighting between the PKK and Turkey's security forces resumed last year after a fragile peace process collapsed. Since then, more than 600 Turkish security personnel and thousands of PKK militants have been killed, according to Anadolu. Human rights groups say hundreds of civilians have also died in the clashes.

Tens of thousands of people have died in the conflict since the PKK took up arms for autonomy in southeast Turkey in 1984. Turkey and its allies consider the PKK a terrorist organization.

Amnesty International condemned Thursday's car bombings as "the latest in a series of reckless and brutal attacks."

"Those responsible for these crimes show a contempt for the right to life and must be brought to justice," said Andrew Gardner, the rights group's Turkey researcher.

On Thursday, authorities imposed a temporary blackout on media coverage of the bombing in Elazig, citing "public order and national security" concerns.

Turkey frequently imposes such bans following deadly bomb attacks. Thursday's order asked media organizations to refrain from broadcasting and publishing anything that may cause "fear in the public, panic and disorder and which may serve the aims of terrorist organizations."