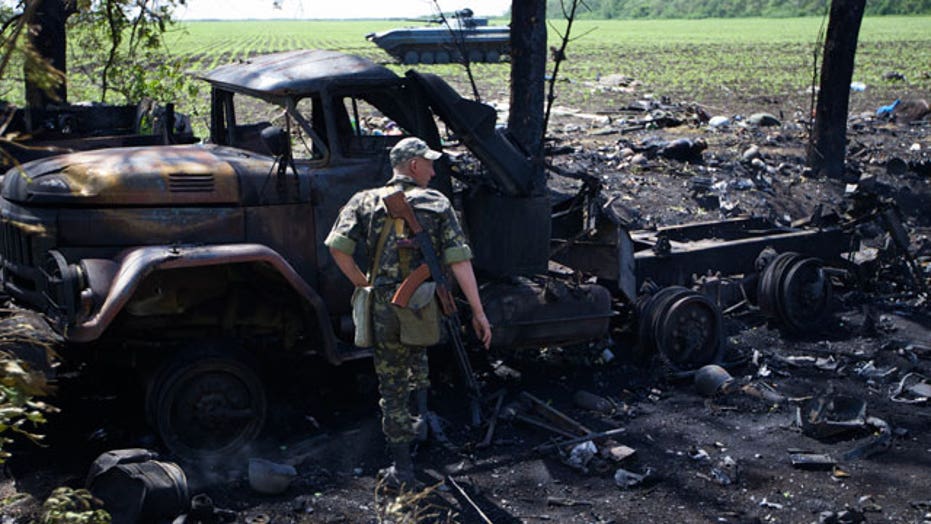 At least 13 Ukrainian troops have died in an attack on a military checkpoint in the Donetsk region of eastern Ukraine as growing violence threatens to disrupt Sunday's presidential election.

The Ukrainian Ministry of Defense confirms to Fox News that there was an attack, and acting President Oleksandr Turchynov said 13 troops were killed. Associated Press reporters at the scene saw 11 bodies at the Ukrainian military checkpoint in the village of Blahodatne, 20 miles southeast of Donetsk.

Witnesses told the AP that the checkpoint was attacked by pro-Russian insurgents who wounded 33 more Ukrainian troops.

Three charred Ukrainian armored infantry vehicles, their turrets blown away, and several burned trucks were seen at the site, in one of two regions in eastern Ukraine that have declared independence from the interim government in Kiev. A military helicopter landed, carrying officials who inspected the area.

Residents said attackers used an armored bank truck, which the unsuspecting Ukrainian soldiers waved through, and then mowed them down at point-blank range. Their account couldn't be independently confirmed.

In the town of Horlivka, a rebel commander claimed responsibility for the raid and showed an array of seized Ukrainian weapons.

"We destroyed a checkpoint of the fascist Ukrainian army deployed on the land of the Donetsk Republic," said the commander, who wore a balaclava and identified himself by his nom de guerre, "Bes," Russian for "demon."

“The weapons you see here have been taken from the dead, they are trophies," he said, showing automatic and sniper rifles, rocket grenade launchers and bulletproof vests in the courtyard of the occupied Horlivka city police headquarters.

"People living in western Ukraine: Think about where you are sending your brothers, fathers and sons, and why you need any of this," the commander said.

On Thursday, a Fox News reporter in Donetsk also witnessed a raid by rebels on a district election office. The rebels took election material and an election official.

“We are stopping an illegal election," one rebel told Fox News.

Thursday's carnage in Donetsk cast a shadow over Ukraine's presidential vote on Sunday, which separatists in the east have pledged to derail. The authorities in Kiev see the vote as a chance to defuse tensions and stabilize the country. Even so, they have admitted it will be impossible to stage the vote in some eastern areas where election officials and voters have faced intimidation and sometimes death threats from the rebels.

Pro-Russian insurgents have seized government buildings and engaged in clashes with government troops that have left scores dead since April. On Thursday, those forces continued battling the Ukrainian forces around Slovyansk, an eastern city that has been the epicenter of fighting.

In the village of Semenovka on the outskirts of Slovyansk, artillery shelling that appeared to come from government positions badly damaged several houses Thursday.

Zinaida Patskan, 80, had the roof of her house torn by an explosion, which also shattered one of the walls. "Why they are hitting us?" she said, bursting into tears. "We are peaceful people!"

Patskan, who wasn't hurt, said she was hiding under a kitchen table with her cat, Timofey, when the shelling came.

About a hundred Semenovka residents later vented their anger against the central government, demanding that the Ukrainian forces cease their offensive and withdraw from the region. Speakers at the rally also called for boycotting the presidential vote.

Many in the east resent the government in Kiev, which came to power after the ouster of a pro-Russian president in February following mass of protests, seeing it as a bunch of nationalists bent on repressing Russian speakers. But many local residents have grown increasingly exasperated with the rebels, whom they blamed for putting civilians in the crossfire.

Pro-Russian rebels have declared two regions independent following referendums dismissed as a sham by Ukraine and the West, and some called for joining Russia. Russian President Vladimir Putin has ignored the plea as he sought to ease the worst crisis in Russia's relations with the West since the Cold War.

Earlier Thursday, the Russian Defense Ministry claimed that several trains carrying weapons and planeloads of troops had left regions near Ukraine as part of a massive military pullout. The ministry said four trainloads of weapons and 15 Il-76 heavy-lift transport planes left the Belgorod, Bryansk and Rostov regions on Wednesday. The troops are to reach their permanent bases before June 1, the ministry added.

NATO had estimated Russia has 40,000 troops along the border with Ukraine.

Gen. Philip Breedlove, NATO's supreme commander in Europe, told reporters in Brussels that some Russian military movements had been detected but it was too early to assess their size or importance. He said a very large and capable Russian force still remained close to Ukraine.

In Kiev, acting Ukraine Prime Minister Arseniy Yatsenyuk described Russia's announcement of troops pull-out as "bluffing." ''Even if the troops are withdrawing, Russian authorities are still assisting the armed terrorists who were trained in Russia," he said.

The United States and the European Union imposed travel bans and asset freezes on members of Putin's entourage after Russia annexed Crimea in March. The U.S. and EU have warned that more crippling sanctions against entire sectors of the Russian economy would follow if Russia tries to grab more land or attempts to derail Ukraine's election.

Russia has pushed for guarantees that Ukraine will not join NATO and has advocated constitutional reforms that would give broader powers to Ukraine's regions, which would maintain Moscow's clout in the Russian-speaking eastern regions that form the nation's industrial heartland.

The Kremlin, meanwhile, angrily protested the detention of journalists working for Russian media outlets in Ukraine. Graham Phillips, a Briton working for state-controlled English language television station RT, was detained earlier this week by Ukrainian forces, but was released Wednesday.

Two correspondents with the Moscow-based Life News television, who were also detained, have remained in Ukrainian custody and face accusations of aiding armed insurgents — a claim Putin has dismissed as "rubbish and nonsense."

Fox News’ Greg Palkot and The Associated Press contributed to this report.