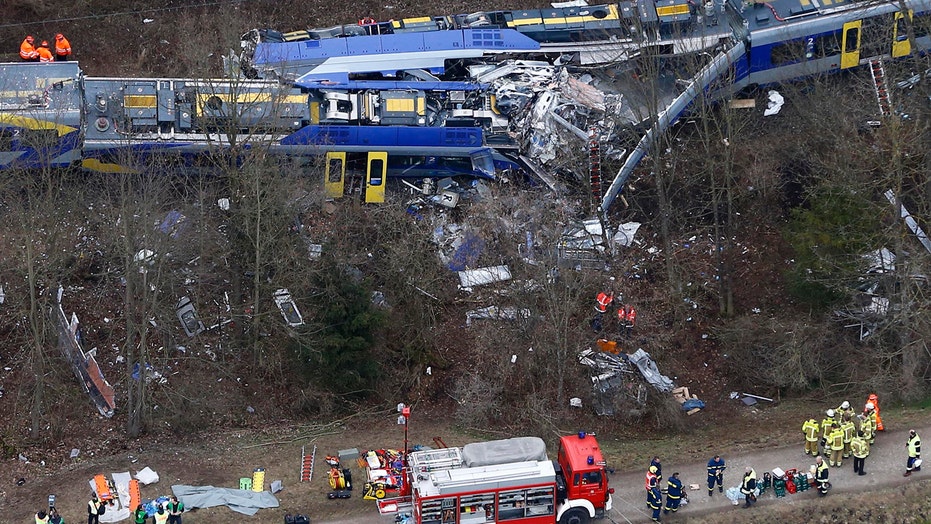 Investigation under way in deadly train crash in Germany

At least ten people were killed and 89 others were injured Tuesday after two commuter trains collided head-on in southern Germany along a curve where an automatic safety system apparently failed to stop them, the transport minister said.

The trains crashed on a single track shortly before 7 a.m. (1 a.m. EST) near the spa town of Bad Aibling, approximately 35 miles southeast of Munich. The crash site is located in a densely wooded and hilly region near the river Mangfall, making rescue operations more challenging.

It took hours to reach some of the injured in the wreckage and authorities were still working at midday to remove the final body from the train.

"Once that is done then the investigators can begin their work," federal police spokesman Rainer Scharf told The Associated Press from the scene.

A statement from the trains' operator Bayerische Oberlandbahn, said both trains had partially derailed and were wedged into each other. Neither the operator nor authorities were able to address possible causes of the collision.

German Transport Minister Alexander Dobrint said the two trains were on a curve and it appears that neither had time to brake before they hit head-on.

"We need to determine immediately whether it was a technical problem or a human mistake," he said.

Dobrint said the stretch was fitted with a safety system designed to automatically stop trains to prevent such a crash and it's not clear why it didn't function. Black boxes recovered from the trains should provide more answers once analyzed.

It was not clear how fast the trains were traveling at the time of the crash but German rail operator Deutsche Bahn told the dpa news agency they were permitted to travel of speeds up to 80 mph on that stretch of track.

The rail line is commonly used by commuters heading to work in Munich, and would normally also carry children traveling to school, but they are currently on holiday, the dpa news agency reported.

Authorities had initially reported 150 injured but federal police
spokesman Stefan Brandl later lowered that figure to 89, with ten of those injuries considered serious.

TV footage showed emergency helicopters and ambulances lined up in an area near the crash scene waiting to transport the most severely injured to hospitals. Water police were helping in the rescue efforts as well, dpa reported, taking injured from the trains across the river to waiting ambulances.

About 700 emergency personnel from Germany and neighboring Austria were involved in the rescue efforts and about a dozen helicopters were used.

"This is the biggest accident we have had in years in this region and we have many emergency doctors, ambulances and helicopters on the scene," Sonntag said.

Dpa quoted Bernd Rosenbusch, the head of the Bayerische Oberlandbahn, as saying, "this is a huge shock -- we are doing everything to help the passengers, relatives and employees."

Both the trains' operator and federal police in Bavaria have activated phone hotlines for family and relatives.

Federal Transport Minister Alexander Dobrindt, speaking from the crash scene, said his thoughts were with the family members of the dead and the injured.

"We need to find out know what happened, if the cause of the crash was based on the technology or human failure," he said.

In Munich, the city blood center put out an urgent call for donors in the wake of the crash.

The Munich Blood Donation Service, which delivers blood products to local hospitals, said on its website that there was "an acute increased need for life-saving blood products" after the accident and called for immediate donations.

Germany is known for the quality of its train service but the country has seen several other accidents, typically at road crossings.

Most recently, a train driver and one passenger were killed when a train hit the trailer of a tractor in western Germany in May, injuring another 20.

In 2011, 10 people were killed and 23 injured in a head-on collision of a passenger train and a cargo train on a single-line track close to Saxony-Anhalt's state capital Magdeburg in eastern Germany.

Germany's worst train accident happened in 1998, when a high-speed ICE train crashed in the northern German town of Eschede, killing 101 people and injuring more than 80.