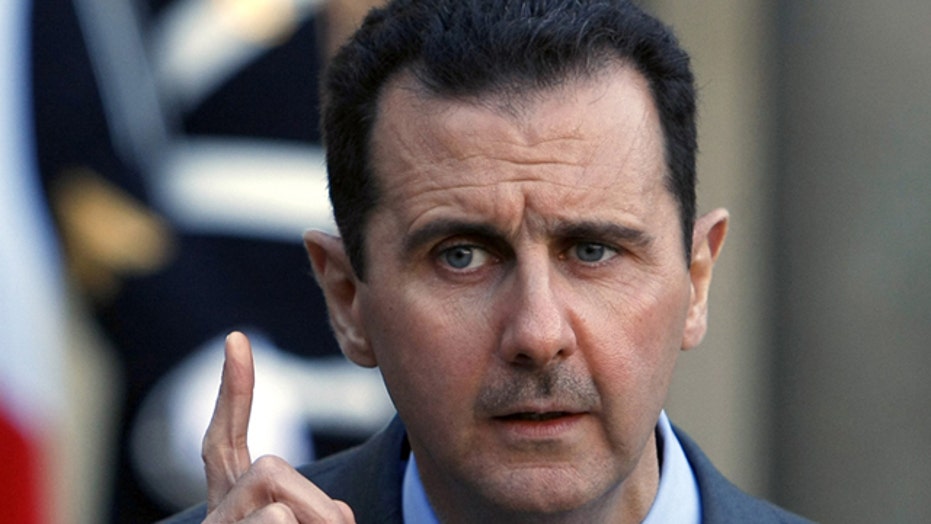 Assad: US airstrikes not weakening ISIS

Syrian president says ISIS continues to gain strength, despite US-led airstrikes, and he's 'open' to negotiate with US. Amb. John Bolton weighs in

Syrian President Bashar al-Assad said Sunday that he’s "open" to negotiations with the United States and that airstrikes conducted by a U.S.-led coalition in the region are not defeating the Islamic State terror group.

“We didn’t attack the American population. We didn’t support terrorists who did anything in the United States,” Assad told CBS’ "60 Minutes." "We always wanted to have good relation with the United States. We never thought in the other direction.”

Assad was reacting to comments made earlier this month by U.S. Secretary of State John Kerry in which Kerry said Washington was "working very hard with other interested parties to see if we can reignite a diplomatic outcome ... Because everyone agrees there is no military solution. There is only a political solution."

Assad has presided over Syria during a devastating civil war that has lasted for four years, claimed over 200,000 lives, and seen the rise of jihadist groups like Islamic State, or ISIS. The Obama administration has repeatedly insisted that any solution to the conflict would involve Assad's removal from power.

Assad repeated his denial that the Syrian Army has been responsible for thousands of civilian casualties through the use of chemical weapons such as chlorine gas, as well as so-called "barrel bombs." He called the claims by activists "part of the malicious propaganda against Syria."

The Syrian leader said that his government has had no direct contact with U.S. officials, but noted, "As principle, in Syria we could say that every dialogue is a positive thing, and we are going to be open to any dialogue with anyone, including the United States, regarding anything based on mutual respect."

However, Assad refused to countenance the idea of stepping down at the insistence of the U.S., saying "This is not their business. We have Syrian citizens who can decide this. No one else." He said he would step down "when I don't have public support. When I don't represent the Syrian interests and values."

When asked why the West questions his legitimacy as president, Assad said the West is used to having “puppets” and “not independent leaders, or officials in any other country.”

Assad said that ISIS, which has conquered vast swaths of territory in Syria and Iraq, has been strengthening despite U.S.-led military action against the terror group, including strikes inside Syria that began this past September.

“Sometimes you could have local benefit but in general if you want to talk in terms of ISIS, actually ISIS has expanded since the beginning of the strikes.”

He added that “some estimate that they have 1,000 recruits every month in Syria,” and that the number of ISIS fighters is also growing in Iraq and Libya.

"It's Wahhabi ideology," said Assad." They use the same books to indoctrinate the people."

Assad also spoke disparagingly of Turkish President Recep Tayyip Erdogen, calling him a "Muslim Brotherhood fanatic" and "somebody who's suffering from political megalomania."

Assad also discussed his relationship with Russian President Vladmir Putin and said that Russia wants “to have balance in the world.”

“They want to be a great power that have their own say in the future of this world,” Assad told CBS News’ Charlie Rose.

When asked what Russia wants for Syria and the region, Assad said "stability."

"Syria, and Iran and Russia, see eye-to-eye regarding these conflicts."

Assad said Syria doesn't have an obligation to any of those countries and that they "do it for the region, and for the world. Because stability is very important to them."