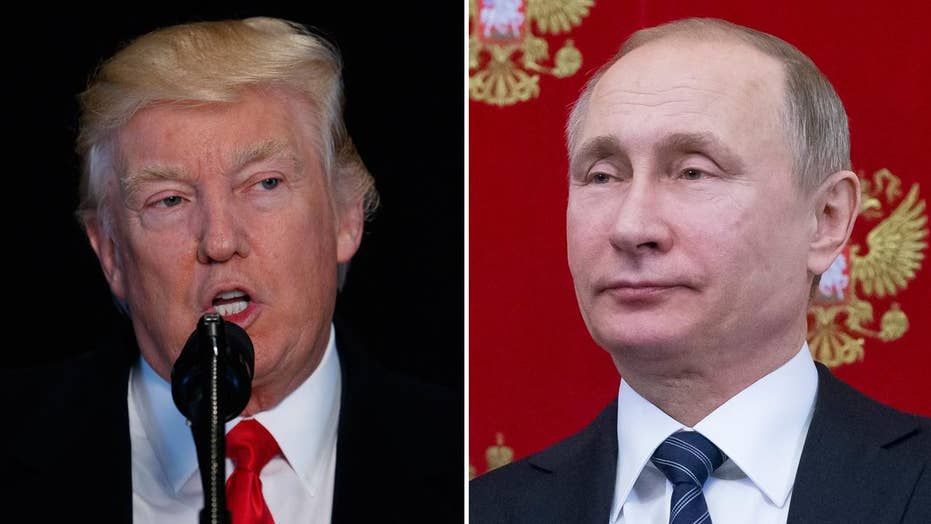 Tensions between Moscow and the White House on the rise

Earlier this month, bombs rained down, rocket systems cracked the air and heavy shelling ripped through eastern Ukraine -- marking the heaviest level of violence the Donetsk People's Republic (DPR) had experienced since a peace agreement was signed in 2015.

For those who live there, it feels like a war the world isn't concerned about.

"We hear the sounds of explosions every day. We all suffer from constant nerves and fear," a local doctor who requested anonymity for fear of retaliation, told Fox News. "I have given up hope that life will get better anytime soon. I don't know whether to stay here, or set off looking for possibilities of a better life."

A tentative ceasefire brokered between the pro-Russian rebels and Ukraine's army began on Monday, but civilians are not very optimistic that it will hold. The ceasefire is already showing signs of fragility after a battle on Monday killed one soldier and wounded another.

While the two sides battle over territorial control, civilians say they feel caught in the crossfires of a bloody battle with no end in sight.

The area has seen an uptick in violence the past two weeks, and Russia allegedly brought in heavy-duty armaments -- such as the Buk missile system, which is so strong it brought down airliner MH17. Officials speculate that the surge in violence could be Russian President Vladimir Putin’s provocative way of testing President Trump to determine whether the new commander in chief will turn a blind eye to the escalation -- or whether he will take action.

One explanation of the flare-up is that Kiev is drumming up a wider array of international support, fearing the possibility of Trump fostering close ties with Putin.

"The government, with its army here, is killing its own people and its own economy. Donetsk should belong to Donetsk," a 57-year-old local insisted, calling it "straightforward genocide." "People are trying to go on living their lives like normal, but there is always a constant reminder -- a flying bullet or the water cut off -- to remind you. America can help stop this."

The region is a self-proclaimed state in Ukrainian territory that receives humanitarian and military assistance from Moscow, but since fighting began has been deemed a terrorist organization by the Kiev given that many there are at war with their official government. Subsequently, the territorial control is split -- the official Armed Forces of Ukraine control some areas while pro-Russian forces, routinely referred to as "little green men," occupy others. In 2015, rebels captured the now decimated Donetsk Airport.

Both sides of the conflict have been widely accused of inflating or even lying about casualties, and they blame each other for launching attacks. Every time a side takes action, it claims it’s merely responding to over-aggression by the other side.

And civilians say they are caught in the middle of a war that has made life for them miserable.

Bombings have knocked out power, leaving many freezing in sub-zero winter temperatures. Sometimes they don’t have water to drink or bathe. On the streets, the shells of bombed out cars are scattered about, next to scorched buildings and demolished homes. Because they are cut off from the outside world, locals line up for hours, even braving snowstorms, to claim a humanitarian aid box: sugar, flour, rice and oil.

"Things had been quiet there for a long time, but on February 2 I was on Skype with my granny when I heard the boom," DPR native Ana, 24, one of the last people to receive a Ukrainian college diploma in 2014 before the region broke away, told Fox News from Moscow. "Both sides are to blame, people are disappointed in both and don't want to be controlled by Russia or the Ukraine."

The war has already claimed the lives of almost 10,000 people, both soldiers and civilians, and many locals fear that despite truce talks, the darkest days are yet to come. And they don’t trust either side.

"People are really terrified. Everyone pretends to be the help – the DPR, Ukraine, Russia – but they all make it worse," a 23-year-old professional in the region said. "The Ukraine can't provide us with good conditions, the DPR makes businesses suffer a lot and unemployment is insufferably high."

According to the source, the DPR "robs businesses and private properties so much it has become normal," and Russia seemingly supports them with its weapons cache.

"We need to be a separate country, but not DPR," the source said. "DPR takes the worse from Russia and the Ukraine. Even if the fighting stops, our lives will not be better under this."

The U.S position under Trump so far remains unclear.

According to one high-ranking U.S official with close ties to the region, de-escalation and "getting the heavy weapons out of there" must be a top priority for the Trump team's regional foreign policy, and a revising of the Minsk agreement is a solid roadmap for Secretary of State Rex Tillerson to utilize. The agreement, brokered two years ago, did not involve the Obama administration. Rather, Russian, French, Ukrainian and German heads of state signed the dotted line, with the removal of heavy weapons a crucial component.

While the war is often framed in terms of political alliances, some on the ground proclaim it is becoming more and more about survival.

According to Moscow-based foreign policy expert Roman Kiselyov-Augustus, the Ukrainian military salary was said to be grimly minimal, about $250 a month, while the rebels reportedly earn twice that amount, thus money to get by is enough to make some switch sides. However, Ukrainian officials last year announced that they had approved drastic increases in base pay.

"The economy there is destroyed, people are losing relatives in the fighting," Kiselyov-Augustus said. "So there is this growing narrative that it is better to join the rebels and die fighting than to die poor, starving and in misery."