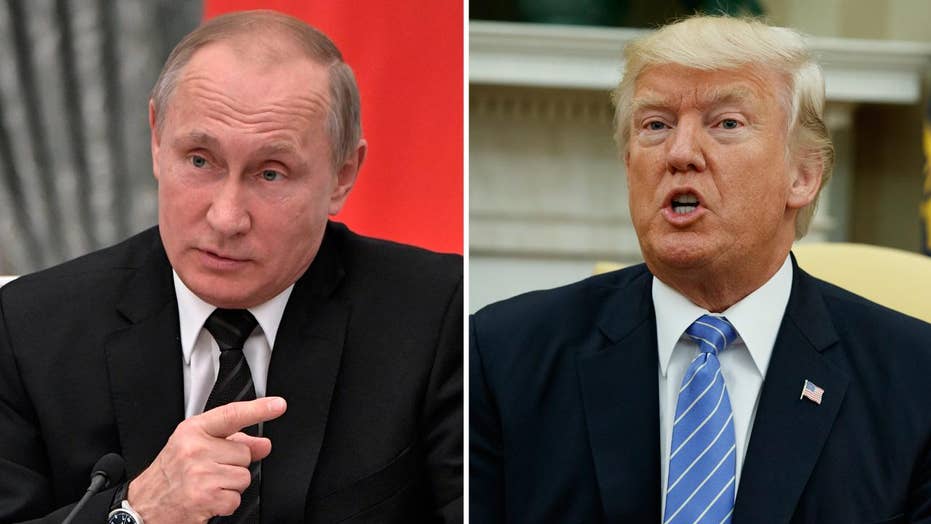 Latest escalation in friction between US and Russia

A Sukhoi Su-27 fighter jet performs during an aviation show outside Moscow. (Reuters)

The Russian Su-27 jet had air-to-air missiles under its wings and approached the U.S. Air Force RC-135 recon jet "rapidly," coming within 5 feet of the American aircraft, the officials said.

Once alongside, the Russian jet was “provocative” in its flight maneuvers and flying “erratically,” according to another official.

Since June 2 there have been more than 35 interactions in the Baltic Sea region between U.S. and Russian jets and warships, but the incident Monday morning is notable because the U.S. military considered it “unsafe,” according to one official.

A U.S. Air Force RC-135 recon plane was buzzed by a Russian jet on Monday. (USAF)

The incident comes one day after the Russian Defense Ministry said it would treat any U.S. jet flying west of the Euphrates River in Syria as a potential target, following a U.S. Navy jet's shoot-down of a Syrian jet that was targeting U.S.-aligned fighters.

The Russian military has supported Syrian President Bashar Assad for decades and deployed dozens of fighter jets and helicopter gunships to shore up the Syrian regime in September 2015.

In February, Russian jets buzzed a U.S. Navy guided-missile destroyer in the Black Sea, while the U.S. Army was unloading dozens of tanks and 500 U.S. Army soldiers arrived in a port in nearby Romania.

For the past few weeks, the U.S. military has participated in a large military training exercise in the Baltic region, including the use of B-52 nuclear-capable bombers and the long-range B-1 bomber.

Dozens of U.S. and allied warships also participated in the Baltic Sea exercise amid heightened tensions with Russia. The “Baltops” exercise concluded over the weekend.

It was not immediately clear how close the U.S. military recon jet was flying near Kaliningrad, a Russian enclave between NATO allies Poland and Lithuania. This fall, Russia moved nuclear-capable ballistic missiles to Kaliningrad, putting some European capitals in strike range.

The U.S. Air Force did not immediately respond to requests for comment.