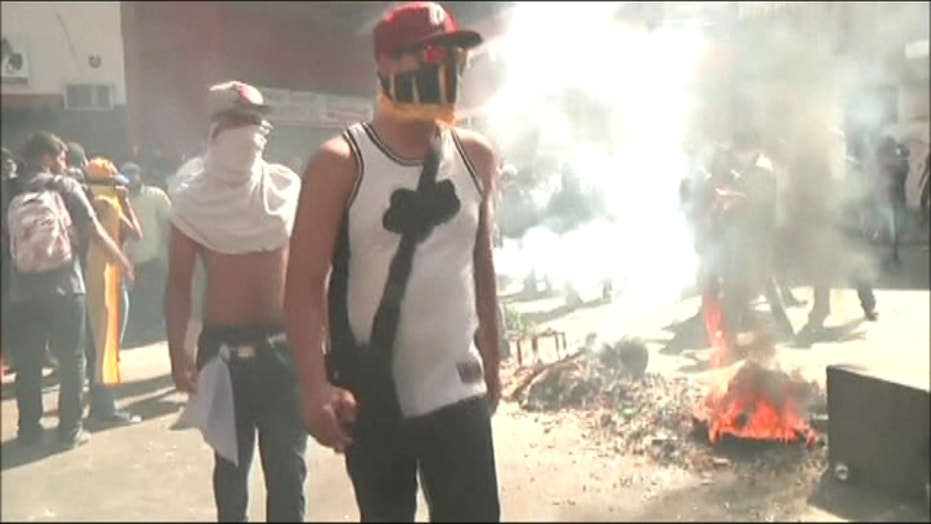 Chaos erupted in downtown Caracas when the gang roared up and began shooting at more than 100 protesters who had been sparring with security forces at the tail end of heated but otherwise peaceful protests organized by hard-line members of the opposition. Most of the roughly 10,000 participants in the demonstrations had already gone home.

As people fled in panic, one demonstrator fell to the ground with a bullet wound in his head. Onlookers screamed "assassins" as they rushed the 24-year-old marketing student to a police vehicle. He was later identified by family members as Bassil Da Costa.

Also killed was the leader of a pro-government 23rd of January collective, as militant supporters of Venezuela's socialist administration call themselves. National Assembly President Diosdado Cabello said the "revolutionary" known by his nickname Juancho was "vilely assassinated by the fascists" but he didn't provide details.

The unrest comes on the heels of a wave of increasingly violent, student-led protests that have spread across Venezuela the past two weeks. Their anger is being fueled by frustration with Maduro's handling of the inflation-plagued economy, worsening crime and human rights concerns.

Maduro expressed regret for the fatalities, which be blamed squarely on "fascist" groups that he said are conspiring to overthrow him. He said he ordered security forces to protect major cities and block any actions to destabilize the country.

"Whoever goes out to provoke violence without a permit to demonstrate will be detained," Maduro said in a nationally televised address to commemorate the 200th anniversary of a key battle in Venezuela's war of independence.

The threats show no signs of deterring hard-liner opposition leaders, who in a late-night news conference vowed to remain on the streets. They blamed the violence on government supporters who infiltrated the big protest march as it was concluding, citing as evidence the police's refusal to use force to contain a small group throwing rocks.

More than 30 anti-government protesters were arrested and are being investigated for inciting violence, Interior Minister Miguel Rodriguez Torres said.

About two dozen people were believed injured during the clashes and were being treated at hospitals, although the government did not provide a tally of casualties, said Inti Rodriguez, a member of the human rights group Provea.

Pro-government supporters countered with a march of their own Wednesday to express support for Maduro, who has accused opponents of trying to violently oust him from power just two months after his party's candidates prevailed by a landslide in mayoral elections.

While anti-government demonstrators vented frustration over a range of issues they were united in their resolve to force Maduro out of office by constitutional means.

"All of these problems — shortages, inflation, insecurity, the lack of opportunities — have a single culprit: the government," Leopoldo Lopez, a Harvard University-trained former mayor, told crowds gathered earlier in the day at Plaza Venezuela in Caracas.

Lopez, who leads a faction of the opposition that has challenged what it considers the meek leadership of two-time presidential candidate Henrique Capriles, called the protests "a moral and patriotic duty."

The crowd then marched to the federal prosecutor's office to demand the release of 13 demonstrators who human rights groups say were illegally arrested during the past two weeks of protests.

A smaller group of mostly students lingered after most demonstrators went home, setting fire to trash and ripping apart concrete sidewalks and steel grating to throw at police and national guardsmen, who responded by firing rubber bullets into the air.

Almost none of the scenes of violence were broadcast on local television, which is dominated by state-run channels and private networks reluctant to criticize the government, leaving Venezuelans to turn to social media to stay informed.

International media outlets also faced obstacles. Colombia's NTN24 was providing live coverage but it was pulled from pay TV without explanation. Correspondents for The Associated Press and other media organizations were roughed up by police who smashed or seized their cameras.