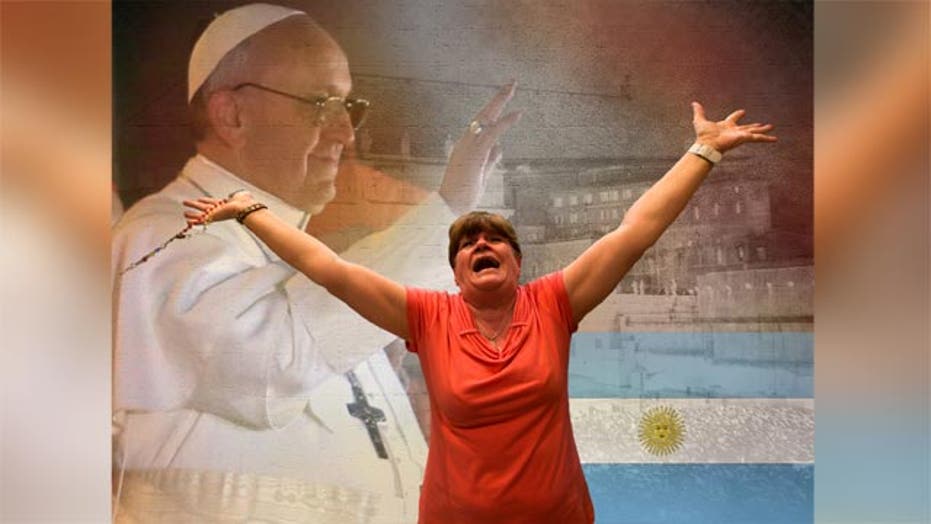 Pope Francis is first pontiff from the Americas

BUENOS AIRES, Argentina – Tears and cheers erupted across Latin America on Wednesday as an Argentine cardinal became the first pope from the hemisphere, and many expressed hope that he help bring the church closer to the poverty-wracked region that is home to more Roman Catholics than any other.

Drivers honked horns on the streets of Argentina's capital and television announcers screamed with elation at the news that the cardinal they knew as Jorge Mario Bergoglio had become Pope Francis.

People jammed the Metropolitan Cathedral in Buenos Aires for a Mass for the new pope, and priests said they hadn't seen such a big crowd in decades.

"Francisco! Francisco!" the faithful screamed. Outside, a thousand people sang and waved Vatican and Argentine flags.

She said she had been in many meetings with the cardinal and described him as "a man who transmits great serenity."

"It's a huge gift for all of Latin America. We waited 20 centuries. It was worth the wait," said Jose Antonio Cruz, a Franciscan friar at the church of St. Francis of Assisi in the colonial Old San Juan district in Puerto Rico.

"Everyone from Canada down to Patagonia is going to feel blessed," he said after exchanging high-fives with church secretary Antonia Veloz.

Bergoglio's former spokesman, Guillermo Marco, told Argentina's TN television station that the new 76-year-old pope -- who is also the first from the Jesuit order -- "has enormous pastoral experience" with a humble bearing.

"You can count the occasions when he used a car with a chauffeur," Marco said. "His choices of life as cardinal have been to have a normal, common life."

The new pope was known for taking the subway and mingling with the poor of Buenos Aires while archbishop.

That common touch was evident in the new pope's first words to the crowd.

"I couldn't believe what I was seeing, when he started saying, `Good afternoon,' just like someone saying hello to a friend," said Bishop Eugenio Lira, secretary-general of the Mexican Conference of Bishops. "He will certainly be the pope who is closest to the people of Latin America. He knows the problems of Latin America very well."

Soledad Loaeza, a political science professor at the Colegio de Mexico who studies the church, said he was a logical choice. "First, Latin America is the most important region in the world for the church," but one where evangelical churches have been making inroads. "So it may also be an attempt to stop the decline in the number of Catholics."

For church leaders seeking growth, instead of the aging, declining congregations in Europe or the United States, "there are only two regions," Loaeza said: Africa and Latin America.

Nearly half of the world's Roman Catholics live in the Americas, north and south, or the Caribbean.

In Cuba, parish priest Gregorio Alvarez said he believes Francis' background could lead the church to focus more on the ills afflicting humanity, and less on internal issues.

"One hopes that the church will be closer to the problems of humankind and not only the problems of the church," Alvarez said at the Jesus of Miramar Church in a leafy western suburb of Havana, where bells pealed following the announcement.

"Being Latin American gives him an advantage. He understands the problems of poverty, of violence, of manipulation of the masses," Alvarez said. "All that gives him experience for the job. ... He's one of the family."

Even Argentine President Cristina Fernandez, a sometimes antagonist who once compared Bergoglio's stands on abortion and gay rights to "medieval times and the Inquisition," offered congratulations.

"It's our desire that you have ... a fruitful pastoral work, developing such great responsibilities in terms of justice, equality, fraternity and peace for humankind," she wrote in an open letter.

Latin America has some of the world's sharpest divides between rich and poor, and Marvin Cruz, a Catholic at the Parish of the Miraculous in the Honduran capital of Tegucigalpa, said the pope's "main challenge will be the fight against economic inequality."

"His training as a Jesuit will allow him to take it head on," Cruz said.

He also noted the erosion of church membership in the face of Protestant denominations and secularism. "I hope he calls those who have left and those without faith to the bosom of the church," he said.

Monsignor Jose Cummings at the Cathedral of San Juan noted that the new pope "has presented himself as a simple and humble man," and specifically mentioned the word charity in his first remarks.

"He's going to pay particular attention to the people and the people are the church," Cummings said.

The church secretary at St. Vincent parish in Santiago, Chile, said she had high hopes for Francis' papacy.

"What I have heard is that he is a simple and good man," Elizabeth Jimenez said. "It is good for Latin America because he knows our reality."

The bishop at the head of Venezuela's church, the Rev. Diego Padron, remarked, "All of Latin America is dropping to its knees to pray, to thank God for this extraordinary gift that he has given us."

"I am convinced this pope will make extraordinary changes, beginning with his gestures today," Padron said, referring to Francis' bowing to the crowd at St. Peter's Square, "asking for a prayer, showing great humility and at the same time displaying a great change."

For some of the poor, the choice has already brought benefits. Juan Carlos Alarcon, a 58-year-old street vendor, came to the Buenos Aires cathedral with a load of Argentine flags to sell.

"I have to take advantage of this historic moment to feed my family," he said.

But there was a tinge of regret for some who had been hoping for a Brazilian pope.

Bruno Scherer, the brother of Brazilian Cardinal Odilo Scherer, sat by himself in a square behind the main Catholic church in the Scherer family's hometown of Toledo in southern Brazil.

"I think Odilo must be happy. He must have the feeling that he was left off the hook," Bruno Scherer told The Associated Press.

"I think that because of his age -- he's still quite young -- he wouldn't want to lose his liberty. He wants to keep traveling, taking photos, and doing his thing. ... Well, let's at least think that."