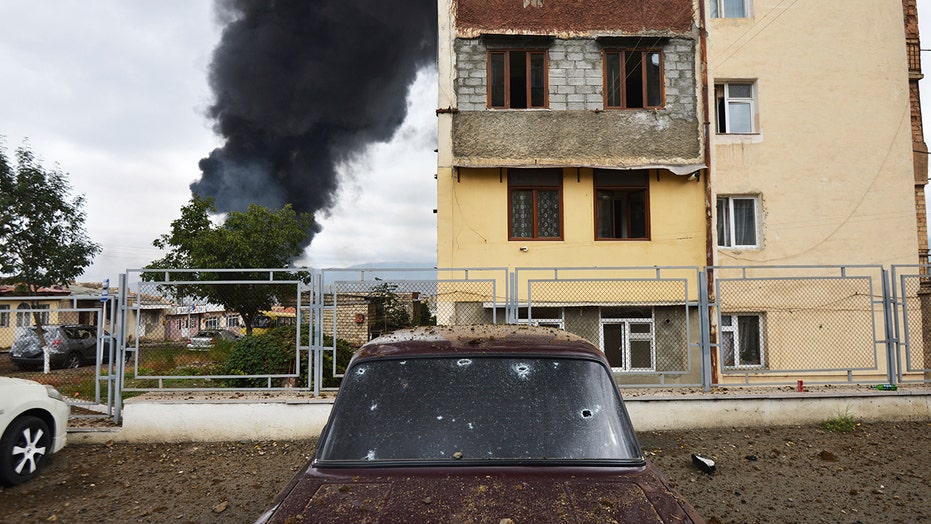 The ongoing bloody battle between Armenia and Azerbaijan in the border area of Nagorno-Karabakh is quickly being seen as a potential proxy war between Ankara and Moscow, which stand on opposite sides of the long-standing dispute.

Reports and accusations emerged this week that impoverished and desperate Syrian opposition fighters, defeated by the throes of almost 10 years of civil war and supported by Turkey in their final stronghold of Idlib, were recruited by private Turkish defense contractors and summoned to take up arms in Nagorno-Karabakh.

One Syrian fighter, who requested anonymity given his proximity to Turkey, told Fox News on Friday that four men from his hometown of Rastan – a small, ancient city and anti-Assad bulwark in the Homs governate – were slain on the battlefield this week. One was a relative, Kinan Ferzat, a 35-year-old major in the Turkey-backed Free Syria Army (FSA) unit known as the Syrian National Army.

"Kinan defected from the Syrian regime army in 2012 and joined the Free Syrian Army (FSA) within the First Corps faction as an Artillery Brigade leader, the military," his family member said. "In 2018, he refused the reconciliation with the regime and was deported to northern Syria, like the other defected military officers. Kinan had two options, either he would go to Idlib and join the Islamic and terrorist organizations, or he would go to Afrin and join the Turkish National Army."

ARMENIA-AZERBAIJAN CLASHES: THE US, OTHERS MUST INTERVENE AS CONFLICT ESCALATES, EXPERTS SAY

He chose to go to Afrin and joined the Sultan Murad faction, which operates under the Turkish Army, the relative continued, claiming that he was approached to go to Azerbaijan and feared refusing – traveling from Gaziantep airport and on to Istanbul, and then into Azerbaijan.

"This has been heartbreaking news for the family," the relative avowed. "We are revolutionaries and have our cause; we don't want to be international mercenaries."

Nonetheless, French President Emmanuel Macron gave credence to the claims last week, announcing that he had evidence that fighters had indeed traveled through the Turkish city of Gaziantep en route to the South Caucasus conflict, which has already killed more than 200 people since it was re-ignited last month.

"We have information today that indicates with certainty that Syrian fighters from jihadist groups have transited through Gaziantep to reach the theater of operations in Nagorno-Karabakh," Macron proclaimed as he arrived for a summit with the European Union leaders in Brussels. "This is a very grave new development."

A spokesperson for the Armenian Embassy in Washington further stressed in a statement to Fox News that "Jihadi terrorists are transferred from Syria by Turkey to Azerbaijan to fight Armenians of Nagorno-Karabakh."

Adding to the woes of a brewing proxy war, Russia's Foreign Ministry – an Armenia military and diplomatic ally – also said in a statement this week that it had been informed of "illegal armed units" sent from Syria and Libya to the region.

Fox News could not independently confirm the alleged travel route or battlefield death, and both Azerbaijan and Turkish officials have adamantly denied that any such Syrian national has been in the former Soviet war theater this week.

"The reports about some mysterious Syrian fighters in Azerbaijan is a complete and absolute falsehood. There is not a shred of credible evidence of that. This is a clear effort to conduct Soviet-style propaganda warfare by the Armenian side, which is trying to cover its own ties to terrorists and distract attention from the fact of illegal occupation of the Azerbaijani lands," a statement issued to Fox News from the Azerbaijan Embassy in Washington. "Such fake news info warfare effort has become a new battleground and carries serious consequences. I hope that the media will make a more thorough fact-checking effort in the future."

Nonetheless, the Syrian relative also showed photos pertaining to the identities of three other men – in their 20's and 30's, supposedly belonging to the FSA and hailing from Rastan – alleged to have died this week.

It remains unclear how many Syrian nationals may have died in this week's skirmishes, with a Washington Post report on Friday projecting that the figure could be at least 20.

Moreover, the Syrian Observatory for Human Rights claimed that more than 300 Syrian fighters had been deployed to Azerbaijan.

Reports have indicated that the fighters are offered upwards of $1,500 a month for the work abroad, a handsome sum after years of internal war and poverty.

Omer Celik, a spokesperson for President Erdogan's ruling AKP, tweeted that the accusations were mere "lies and a provocation against Turkey."

"Similarly untrue are reports on Turkish military involvement in the war," the statement continued. "Instead, a more serious concern should be the threat posed by Syrian and Lebanese groups fighting on the Armenian side, Armenian military contingent supporting official Damascus in the Syrian civil war and the presence of the Armenian terrorists trained in the Bekaa Valley to attack Israel."

A building of a residential area burns after night shelling by Azerbaijan's artillery during a military conflict in self-proclaimed Republic of Nagorno-Karabakh, Stepanakert, Azerbaijan, early Sunday, Oct. 4, 2020. Armenian officials on Sunday accused Azerbaijan of carrying out strikes on Stepanakert. Azerbaijan's Defense Ministry said Armenian forces were attacking the towns of Terter and Horadiz from Stepanakert. (Areg Balayan/ArmGov PAN Photo via AP)

Ankara has also this week accused Armenia of sending Syrian and Iraqi Kurdish militants the PKK – its longtime foe due to decades of violence amid a separatist push – to the beleaguered border, but no further evidence has been provided.

Given the vast spattering of tit-for-tat accusations and claims of foreign fighting footprints, international observers have expressed apprehension that the long-frozen and largely unresolved territorial dispute could have wide-reaching implications.

The Nagorno-Karabakh has been a source for skirmishes since the 1994 ceasefire between the two former Soviet nations. The terrain technically rests in Azerbaijan, as per international law, but it is generally defined as being controlled and populated by the ethnic Armenians -- with Armenia's support to run its affairs independently from Baku, the Azerbaijan capital since the Soviet Union fell almost three decades ago.

The prized parcel – rich in minerals, mulberry groves, and alpine meadows – is a point of patriotic pride for both the Muslim majority Azerbaijan and Christian-dominant Armenia.

The OSCE Minsk Group – co-chaired by France, Russia, and the US – was established in 1992 in a bid to find an amicable solution. While a ceasefire was declared two years later, the dispute remains – punctured by fierce flareups – such as the current one, involving air power, missiles, and heavy armor.