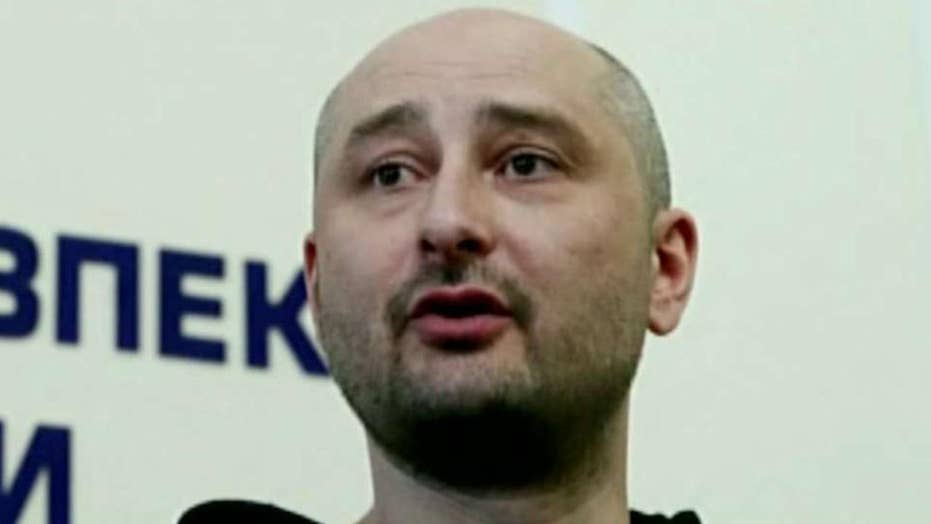 The fierce anti-Kremlin Russian journalist who was reported dead in Ukraine's capital showed up to a news conference on Wednesday very much alive, as authorities revealed it was all part of a foiled murder plot against him.

Vasily Gritsak, the head of the Ukrainian Security Service, said at a news conference that the agency faked Arkady Babchenko's death to catch those who were trying to kill him.

Babchenko showed up at Gritsak's news conference on to gasps from the press, and thanked everyone who was mourning his death.

Before ushering Babchenko into the room, Gritsak said investigators had identified a Ukrainian citizen who had been recruited and paid $40,000 by the Russian security service to organize and carry out the killing. The unidentified Ukrainian man in turn hired an acquaintance who had fought in the separatist war in eastern Ukraine as the gunman.

Russian journalist Arkady Babchenko, who was reported murdered in the Ukrainian capital on May 29, speaks during a news briefing by the Ukrainian state security service in Kiev, Ukraine May 30, 2018 (REUTERS/Valentyn Ogirenko)

The journalist was leaving his apartment on Tuesday to go out to buy bread when he was reportedly shot several times in the staircase of his building in Kiev, Ukrainian politician Anton Gerashchenko said in a Facebook post. His wife found him bleeding and called an ambulance, but authorities claimed he died on his way to the hospital.

Babchenko did not tell his wife that the murder had been staged, according to Reuters. Neither he nor Gritsak provided details of how they staged Babchenko's injuries or made his wife believe he was dead.

“I’m sorry, but there was no other way of doing it," he said Wednesday. "Separately, I want to apologize to my wife for the hell that she has been through.”

Kiev Police, who said the journalist had multiple gunshot wounds in his back, had told the public they were working on the theory that he was targeted because of his work, according to Sky News.

"The first and the most probable version is his professional activity," Kiev Police Chief Andriy Kryshchenko said Tuesday. Kryshchenko added that detectives had been unable to speak to his wife because she was in a state of shock

Ukraine's Ministry of Internal Affairs even released a sketch of Babchenko's possible assassin, who was described as a man between 40 and 45 years old with a grey beard and wearing a hat.

Babchenko fled Russia last year, fearing for his life, and settled in Ukraine. He had served in the Russian army during the two wars in Chechnya in 1990’s and became one of Russia's best-known war reporters.

His reported murder triggered a war of words between Russia and Ukraine, as several Ukrainian politicians immediately blamed the Kremlin for the act.

"Putin's regime takes aim at those who cannot be broken or intimidated," Gerashchenko posted to Facebook.

In this photo taken on Friday, May 31, 2013, Arkady Babchenko, 41, who had been scathingly critical of the Kremlin in recent years, stands at a police bus during an opposition rally in Moscow, Russia. (AP Photo/Alexander Baroshin)

The Kremlin described such allegations as part of an anti-Russian smear campaign.

“This is the height of cynicism against the backdrop of such a brutal murder. It is anti-Russian bluster instead of talking about the need to conduct a thorough, objective investigation,” Kremlin spokesman Dmitry Peskov told reporters before it was revealed that Babchenko was alive and well.

The Kremlin told the TASS News Agency that Ukraine has become a "very dangerous place" for journalists, and criticized officials for failing to protect them.

"Bloody crimes and total impunity have turned into daily routine for the Kiev regime," the ministry told TASS.

Another well-known reporter, Pavel Sheremet, was killed in a car bombing in central Kiev in July 2016, according to Sky News. The case remains unsolved but he was also critical of Russia, Ukraine and his native Belarus.