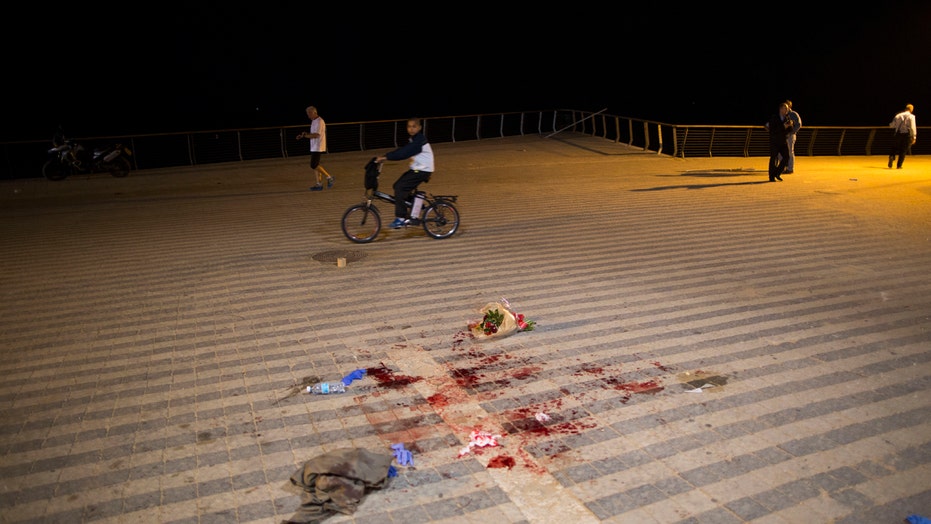 An American student from Vanderbilt University was stabbed to death in one of three bloody terror attacks that  rocked Israel Tuesday, just as Vice President Biden arrived in Tel Aviv to meet with leaders in an effort to stem Palestinian violence and mend frayed relations with the Jewish state.

The chancellor of Vanderbilt University, Nicholas S. Zeppos, identified the student as Taylor Force, who attended the Owen Graduate School of Management.

"Taylor embarked on this trip to expand his understanding of global entrepreneurship and also to share his insights and knowledge with start-ups in Israel," Zeppos said in a statement.

"He exemplified the spirit of discovery, learning and service that is the hallmark of our wonderful Owen community. This horrific act of violence has robbed our Vanderbilt family of a young hopeful life and all of the bright promise that he held for bettering our greater world."

Part of Biden's mission is to smooth over the latest bump in relations between the Obama White House and Prime Minister Benjamin Netanyahu after a public falling out over the Iran nuclear deal last year. Biden will meet with Netanyahu in Jerusalem on Wednesday to discuss military aid, a session that comes on the heels of the prime minister canceling a trip to Washington.

His office issued a statement later condemning the attack in "strongest possible terms."

As if to underscore the continuing problem of Palestinian violence, which has surged since the so-called "knife intifada" began in Jerusalem last fall, a Palestinian opened fire at police near Jerusalem's Old City an hour before his plane touched down. One police officer was reportedly shot in the head in the attack, and another hurt as the assailant was chased down and kileld.

Then, after Biden arrived in Tel Aviv, 10 Israelis were stabbed in the city's Jaffa port section, Reuters reported. A BBC reporter tweeted that Biden was a few hundred meters from the attack.

The wife of the American student who died in the attack was one of five seriously injured.

The suspect, who was not immediately identified, was "neutralized," authorities said.

Both incidents unfolded after a dramatic stabbing attack in the town of Petah Tikva, 20 miles east of Tel Aviv. The Israeli victim managed to pull the knife from his own neck and stab the Palestinian attacker, subduing him, The Times of Israel reports.

The victim had been collecting money for charity at the time, the newspaper adds.

It was the latest in a wave of Palestinian attacks that have killed 28 Israelis, mostly in shootings, stabbings and assaults with cars. At least 174 Palestinians were killed by Israeli fire during that time. Most were attackers and the rest were killed in clashes, Israel says.

Palestinians say the violence stems from frustration at nearly five decades of Israeli rule over the West Bank and east Jerusalem. Israel says the violence is fueled by a campaign of Palestinian lies and incitement that is compounded on social media sites that glorify attacks.

The White House said Israel had proposed two dates for a meeting between the leaders and the U.S. had offered to meet on one of those days. “We were looking forward to hosting the bilateral meeting,” said Ned Price, a spokesman for the White House’s National Security Council. “We were surprised to first learn via media reports that the prime minister, rather than accept our invitation, opted to cancel his visit.”