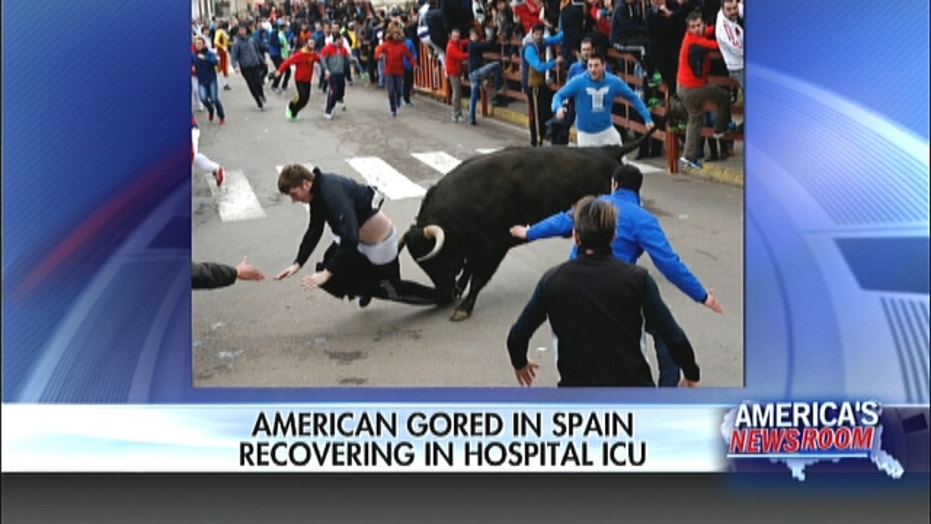 American gored by bull in Spain

A 20-year-old American man who was badly gored during a bull-running festival is out of intensive care and improving.

MADRID (AP) – A 20-year-old American man who was badly gored during a bull-running festival is out of intensive care and improving, a spokesman for the Clinic Hospital in western Salamanca said Monday.

Benjamin Miller, from Georgia, was out of danger and not likely to have to undergo any further operations, the spokesman said. He spoke on condition of anonymity in keeping with hospital rules.

Miller suffered several wounds, including a 40-cm (16-inch) goring in the thigh, when he was caught by a fighting bull during a festival in the nearby town of Ciudad Rodrigo on Saturday.

Images showed Miller being repeatedly tossed by the bull and in obvious pain at being gored and pushed along the ground. Helpers eventually managed to pull him up from the street to safety.

Fiestas featuring bulls are common in Spain and many people are injured each year. Spain's most famous bull-running event is in the San Fermin festival in Pamplona.

In the runs, hundreds of people test their bravery and speed by dashing ahead of bulls through the streets to a town's bull ring.

Towns normally have special medical units ready to attend those injured in the festivals.