Amazon wildfires can be seen from space

The Amazon wildfires can be seen from space new NASA images reveal.

A firefighting plane from California made its way to South America on Friday to help local authorities fight the massive wildfires burning up in parts of the Amazon.

After its arrival, the aircraft began flying over devastated areas to help put out the fires and protected forests near the Bolivia-Brazil border.

A Boeing 747-400 Global SuperTanker, stands on the tarmac before it starts firefighting operations, at the Viru Viru airport in Santa Cruz, Bolivia, Friday, Aug. 23, 2019. Bolivia, along with Brazil, is struggling to contain wildfires, many believed to have been set by farmers clearing land for cultivation. (AP Photo/Juan Karita)

Brazil's National Space Research Institute, which monitors deforestation, has recorded 76,720 wildfires across the country this year, as of Thursday. That's an 85% rise over last year's figure. And a little over half of those, 40,341, have been spotted in the Amazon region.

The agency says it doesn't have figures for the area burned, but deforestation as a whole has accelerated in the Amazon this year.

Meanwhile, large fires also have been burning in neighboring countries such as Bolivia, Paraguay, and Argentina. 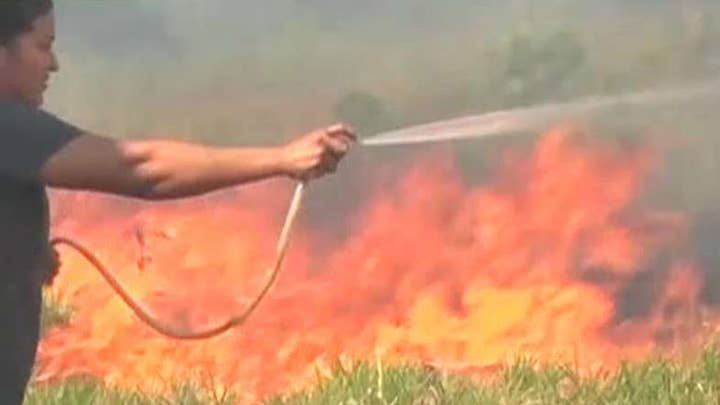 He authorized the country’s military forces to deploy to border areas, indigenous territories and other affected regions in the Amazon to assist in putting out fires.

The military will "act strongly" to control the wildfires, Bolsonaro promised as he signed the decree.

"The protection of the forest is our duty," the president said. "We are aware of that and will act to combat deforestation and criminal activities that put people at risk in the Amazon. We are a government of zero tolerance for crime, and in the environmental field it will not be different." 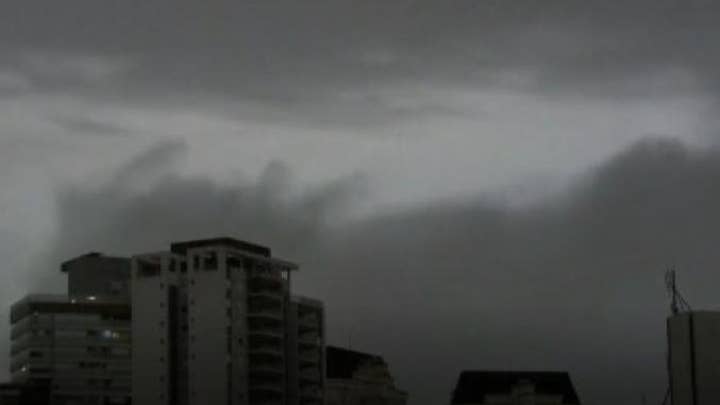 The world's largest rainforest, 10 times the size of Texas, is often called the "lungs of the earth," and 60% of it lies within Brazil.

Trees store carbon absorbed from the atmosphere, and the Amazon each year takes in as much as 2 billion tons of carbon dioxide — a greenhouse gas that contributes to global warming.

Fires are common in Brazil in the annual dry season, but they are much more widespread this year. Brazilian state experts reported nearly 77,000 wildfires across the country so far this year, up 85% over the same period in 2018.

Neri dos Santos Silva, center, is silhouetted against an encroaching fire threat after he spent hours digging trenches to keep the flames from spreading to the farm he works on, in the Nova Santa Helena municipality, in the state of Mato Grosso, Brazil, Friday, Aug. 23, 2019. Under increasing international pressure to contain fires sweeping parts of the Amazon, Brazilian President Jair Bolsonaro on Friday authorized use of the military to battle the massive blazes. (AP Photo/Leo Correa)

President Donald Trump said Friday that he spoke with Bolsonaro and the U.S. is "ready to assist."

"Our future Trade prospects are very exciting and our relationship is strong, perhaps stronger than ever before," Trump tweeted. "I told him if the United States can help with the Amazon Rainforest fires, we stand ready to assist!"

Meanwhile, France accused Bolsonaro of having lied to French leader Emmanuel Macron and threatened to block a European Union trade deal with several South American states, including Brazil. Ireland joined in the threat. 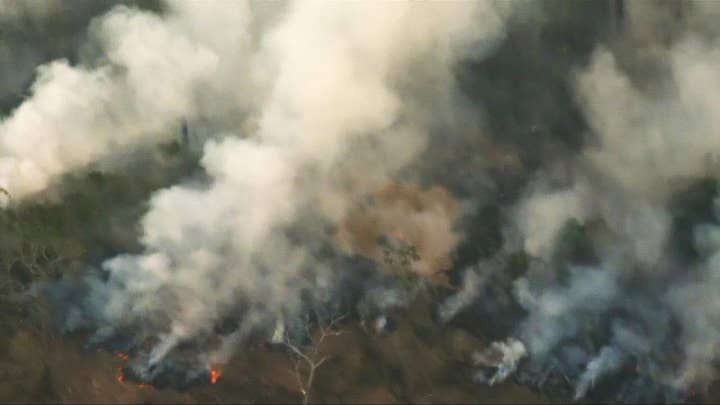 Macron – host and leader of this year’s G7 Summit – called on members to discuss the Amazon fires when they meet over the next few days. Brazil is not a member of G7 and will not be present.

“Our house is burning. Literally. The Amazon rain forest — the lungs which produce 20 percent of our planet’s oxygen — is on fire,” Macron said Thursday. "It is an international crisis. Members of the G7 Summit, let's discuss this emergency first order in two days!"

Fire consumes an area near Porto Velho, Brazil, Friday, Aug. 23, 2019. Brazilian state experts have reported a record of nearly 77,000 wildfires across the country so far this year, up 85% over the same period in 2018. Brazil contains about 60% of the Amazon rainforest, whose degradation could have severe consequences for global climate and rainfall. (AP Photo/Victor R. Caivano)

The Brazilian government has said European countries are exaggerating Brazil's environmental problems in order to disrupt its commercial interests. Bolsonaro, who has said he wants to convert land for cattle pastures and soybean farms, said it was difficult to curb increasing deforestation with limited resources.

"It's not easy to fight deforestation, our Amazon area is bigger than all of Europe," he said. "We'll do what we can to fight this crime."

Fox News' Danielle Wallace and Edmund DeMarche and the Associated Press contributed to this report.