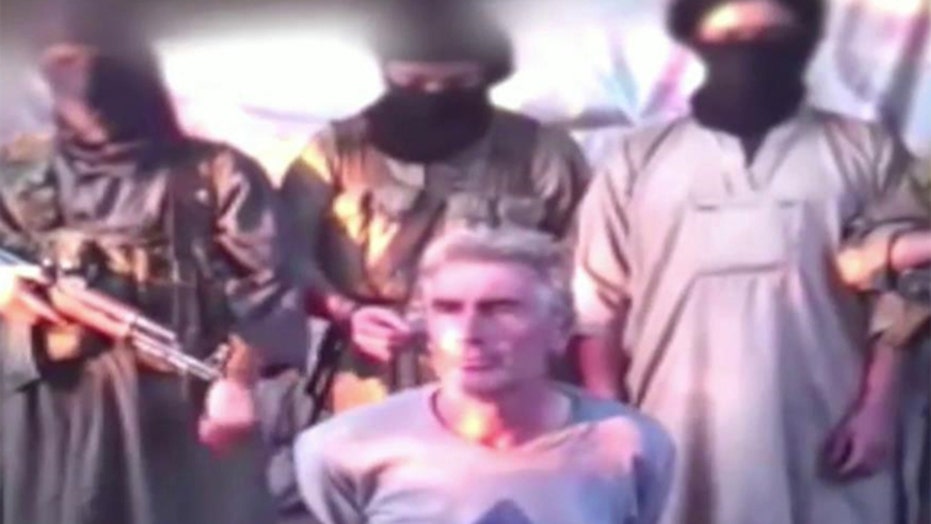 A group calling itself Jund al-Khilafah said after abducting Herve Gourdel on Sunday that he would be killed within 24 hours unless France ended its airstrikes against Islamic State fighters in Iraq.

Gourdel, a 55-year-old mountaineering guide from Nice, was seized in mountains of northern Algeria.

Hollande condemned the killing of Gourdel and said France would continue its fight against the Islamic State group.

"Herve Gourdel is dead because he is the representative of a people -- ours -- that defends human dignity against barbarity," Hollande said, speaking along the sidelines of the U.N. General Assembly meeting in New York. "My determination is total and this attack only reinforces it. We will continue to fight terrorism everywhere."

The video resembled those showing the beheadings of two American journalists and a British aid worker in recent weeks, but instead of showing President Barack Obama, it showed Hollande.

In the video, masked gunmen pledged their allegiance to the leader of the Islamic State group, Abu Bakr al-Baghdadi, and said they were fighting his enemies. They criticized the French attacks in Iraq as well as its intervention against radical Islamists in Mali.

"Our values are at stake," French Prime Minister Manuel Valls said Wednesday after hearing about the video. He would not comment further, but minutes earlier he insisted that France would continue fighting in Iraq as long as necessary.

Algerian police and soldiers had been combing the imposing Djura Djura mountains on Tuesday in the search for Groudel.

Residents described roads choked with military trucks and helicopters clattering overhead as security forces fanned out through the rugged region that has long been a hotbed for extremist groups.

French forces on Friday joined the U.S. in carrying out airstrikes against extremists who have overrun large areas of Syria and Iraq.

An Algerian security official told The Associated Press that the new group had split away from Al Qaeda's North Africa branch just two weeks ago and declared allegiance to the Islamic State group in Syria and Iraq -- a rival of Al Qaeda.

The new Algerian group is led by 36-year-old Abdelmalek Gouri, also known as Khaled Abu Slimane, a veteran Al Qaeda commander from the central region behind a series of bloody attacks on Algerian soldiers, said the official, who spoke on condition of anonymity because he was not authorized to speak to the press.

Gourdel was taken Sunday night while driving through the Djura Djura mountains in Algeria's rugged Kabylie region, which remains one of the last active areas of operation for Al Qaeda in Algeria.

He was taken with four Algerian companions who were later released.

At least 14 soldiers were killed in April close to where Gourdel was kidnapped when they were ambushed by militants in an operation led by Gouri, according to the official.

Algeria has been fighting Islamic extremists since the 1990s and in recent years they had been largely confined to a few mountainous areas, such as the Kabylie region, where they have concentrated on attacking soldiers and police while leaving civilians alone.

While the Al Qaeda's branch in the Sahara has made millions off kidnapping foreign hostages, it has rarely killed them as the Islamic State group has now done with the two Americans and Briton it held.

Djallil Lounnas, an expert on Islamic movements in North Africa said the emergence of a group claiming loyalty to the Islamic State, a rival of Al Qaeda, suggests that Abdelmalek Droukdel, the leader of the North Africa branch is losing control of his men.

He said more attacks are to be expected as the new group tries to make a name for itself.

The U.S. embassy in Algiers renewed its travel warning for Algeria Tuesday, urging Americans traveling there to "exercise vigilance" in their movements.